Been Riding the local trail and want to update everyone on the conditions? Visiting and want to know what to expect?

Post it up here! We’re in the season that a heads up can make the drive to the trailhead (local or otherwise) is nice to have.

To start off…The valley trails have a dusting of snow with some semi frozen puddles as of yesterday afternoon.

Spider Lake. Double-track has ice, and probably will all season. Skull pretty good, some open water and a couple of icy patches. Six pack good.

Nine Mile was good yesterday evening, most wet spots frozen. Should be nice and solid today.

Spider was mint today. Some ice, but possible to keep it upright if you hold the line.

Fight was alright yesterday, woodsy parts were really good, exposed granite areas had quite a few ice patches. I’d recommend Osprey and Attic, Lou’s was kind of icy and not so great.

Mahone Bay had a dusting of snow, and the water crossings were open.

Gore was really good. Some icy patches but easy to ride without studs. The first part of the long climb that spits you out on the gravel road climb was icy and tricky but still rideable. Oh, and there is a tree down on the Bi-hi.

Flipside/Scotch/DaMinion were great on Saturday. I went in just as the snow stopped… there was more of it than I was expecting but it was light and fluffy, no problem for skinny tires. No issues with ice on the trails but the fireroad was covered in it.

Irishman’s was sweet yesterday. A few of the typically wetter spots had some shell ice that was cracking but mostly held up under my 200lbs and 2.2 XC tires. I’ve never really MTB’d in the winter so it was way more fun than I was expecting. Sounds like everyone was hitting the trails on Sunday. Top shelf day!

After almost a month of crap weather and shitty trail conditions this makes me happy.

Hoping to hit up keppoch in the next week or so if work/family commitments allow…will report back!

Nine Mile River was stellar last night. Frozen solid and super fast! Very little snow. Studs probably not required but I was glad to have them in a few spots.

Crispy hero trails out there just watch out for some sneaky ice patches 25%of it in entrance of ebirch. On the other hand.vandals seen can be disappointing. 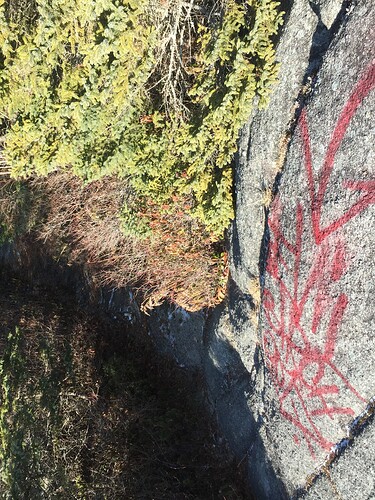 Daminion and scotch are about as perfect as it gets right now. A sweet mix of hero dirt and ice.

Rideable without studs. The ice is easy to spot and can be avoided, for the most part.

Spider is looking really good now, too. Ribbon and Skull both in good condition, minor icy spots on Skull that are easily avoidable. Doubletrack is icy in the usual spots, glassy smooth in some cases so use care on the way in. (Didn’t hit anything else) Hero dirt abounds!

Fight has icy spots to watch out for but most of the open granite is sweet riding as usual.

Yesterday Keppoch had awesome crunchy (hero?) snow- railing berms on chicken cougar was a blast. There is some ice lower down on the more heavily travelled areas.
Recommend studs and a flask of your favourite distilled confidence builder.
Unfortunately working today, but there’s a couple of inches of fluffy snow on the ground!!
-J

Nine Mile River is a good as it will ever be. Studs recommend but could do without if taking your time. Especially on the back loop.