Any tips on how to get this out?

Trying to get this crank arm bolt out. I’ve hit it with pb blaster. Tried shocking the bolt. Tried putting a piece of pipe over the ratchet. This little bugger will not loosen. 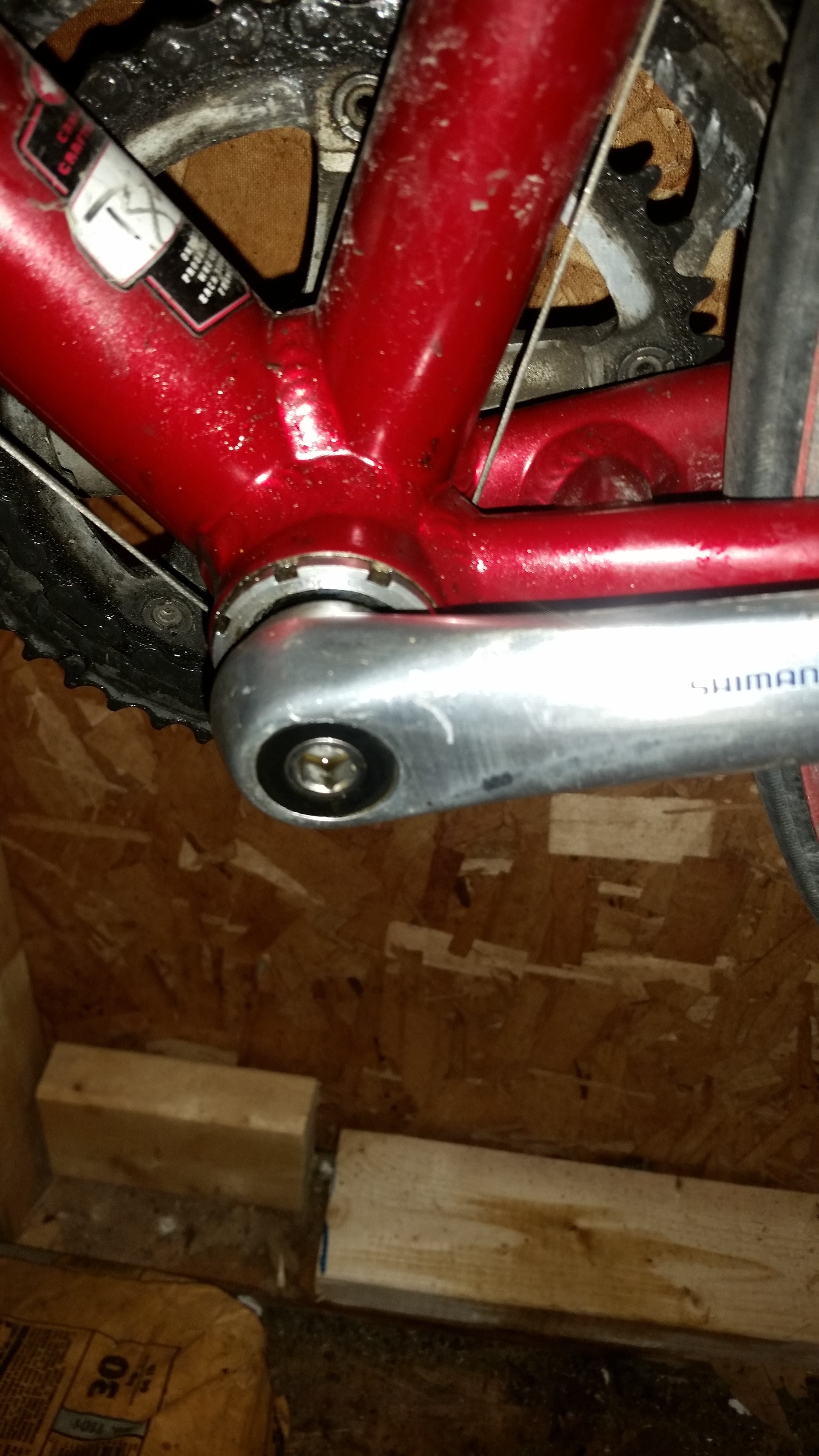 Could try heating it perhaps. Sometimes a couple of heating/cooling cycles will do the trick.

You could always drill it out. You’ll only need to replace the BB and the bolt. If you definitely can’t budge it, that may be a solution. Sucks though.

Honestly, the extra pipe should give you the leverage to do it. How long is it?

Maybe 18 in. I think the problwm might be that I can’t get enough torque on it whike holding the crank arm from rotating

Zip tie the crank arm to the stays.

That was going to be my next step. I’ll try it tonight

It is awkward, but if you can get the whole bike into a vice to hold the cranks still, that helped me.

No go. Snapped the 3 decent sized cable tis I had holding it. Try bashing the ratchet with a hammer too. Won’t budge. The other side is the same

Stupid question. Are you turning it the right way?

I’d try spraying WD-40 or silicone lube or whatever else you have lying around to try to loosen it up, too. But I think you’re going to need a vice and a bigger extension bar for the socket.

You could also try hose clamps instead of cable ties. Make sure they are as close to the pedal end of the crank as possible. Wrap the chain stay with parts of an old tube, or something similar, to prevent damage.

Yes right way. I’ve sprayed everything I have on it. Lol.

I’m getting a creaking sound when I stand up and put some power down. I’m thinking it’s in the bb. But I can’t get this damn thing apart

I would if I had one

Try taking it to a bike shop

Agreed–they’ll have no trouble extricating it.

Honestly this surprises – I’ve never had difficulty removing the crank arm bolt from a square taper bottom bracket (granted I’ve not been cycling seriously as long as many of you have). But this bike looks a lot less mistreated than my winter bikes are, which is where I would expect to see seized bolts start to appear, and as the OP stated he put lots of penetrating oil to it. Even if these crank arm bolts were loctited (why?) then that wouldn’t provide much force compared to the upper body strength (?) of a cyclist.

That’s what I’m going to have to do

It’s strange. Although the bike is 17 years old it’s only been in the rain once since I’ve owned it. Everything else has cone apart with ease

pped the 3 decent sized cable tis I had holding it. Try bashing the ratchet with a hammer too. Won’t budge. The other side is the same

First, heat it up nicely again after a good PB soak, and cleaning. Then get a nice fat 3’ pipe to slip over your 8MM allen key. Now, get a 2x2 or good piece of a hockey stick and jam it between the crank and seat or chain stay… Wherever you can get a good lock on it. You might want a second set of hands to help you with this part, or lay it on the ground, and stand on it using your legs to help jam things locked while you reef on the pipe. Hard to describe on here but I’ve freed many a crank bolt using this.

Also, yelling TORQUE at the top of your lungs will help.