Besides bikes, what else do you do?

Besides bikes my hobbies include farming, we have a small herd of dairy goats, laying hens and ducks, as well as Chickens, Ducks and Turkeys for meat, a horse for fun and a Llama. I also like to grow veggies and stuff.

When I am not doing that or working at my real job, I find the time to fly RC airplanes, make beer, wine and nap.

I am never bored.

Who knew we had things in common?? I like to nap too…

I am currently consumed with thoughts of trail building… far more than thoughts of riding.
Should I get this checked out?

Compared to you Troy, I’m kind of boring…

I like to fish, spend time at the cottage, VERY amateur photography, and hanging out with my wife.

There’s more, but suffice it to say I’m fairly varied.

I am pretty heavily involved in motorsports, I race a couple different cars and instruct high performance driving and racing.
I used to work a bit in professional motorsports as well, but that stopped when my daughter came along, she is my biggest hobby now…

In the past i’ve

I’m a stay at home dad and in my ‘spare time’ I’m involved in agriculture and local organic food. I grow almost all the fresh produce my family eats and grow most of my own seed for that produce. We do a lot of preserving, canning, drying, fermenting and winter storage. I raise ducks for eggs and am contemplating goats for dairy. I also work on several farms in my area when they need an extra hand planting, harvesting, haying, fixing buildings, fencing…people find me handy.

I trained as a welder in the hopes I could one day build custom bike frames, I’ve made some bike cargo trailers and done ornamental metalwork but mostly now I build custom farm equipment and fix the broken equipment that lands in my driveway from time to time.

[quote=“pmachan”]I am pretty heavily involved in motorsports, I race a couple different cars and instruct high performance driving and racing.
I used to work a bit in professional motorsports as well, but that stopped when my daughter came along, she is my biggest hobby now…

hey Paul is this your corvette? 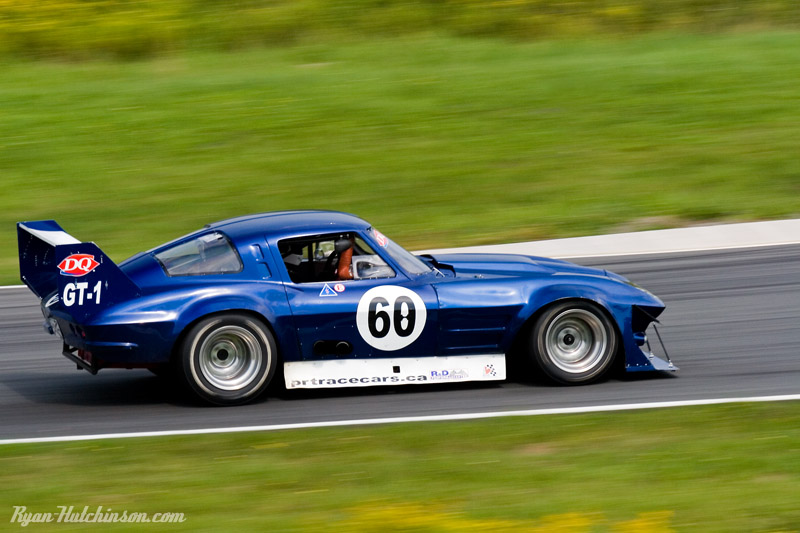 I spend a lot of my time with my daughter, she is almost 3. We are having a son in may.
I am a runner, will be attempting my first full marathon this may.
I am also a photographer.

That would be me yup, unfortunetly the car was crashed quite hard this past Sept at a track in Que, currently trying to rebuild it.
Our other car is a GT3 BMW E30.

Besides work (IT) and family (wife, 2 kids 2 1/2 years and 1 year old, dog) I somehow find time to do some home improvement projects, some woodworking, and restore old woodworking equipment.

split window stingray? tell me that is just a shell on a tube frame not the real deal. man i would love to hear some of your racing tales someday.

Its an original 63 body from the firewall back, nose is from a 64, all heavily modified obviously.
The chassis is semi tube frame, has some sections of original frame, it does have the original Corvette IRS with transverse rear leaf spring too! But, again, all very highly modded by us. The rest is GT1 racecar all the way, 358 SBC race engine (550hp), dog ring gearbox, fancy dampers, big data system, etc. Its a very fast car, it looks like an older vintage car, but runs with modern GT stuff (Porsche 911 GT3 cup cars, Ferrari Challenge cars, etc). Its fun to drive, but a LOT of work to keep running. I’ll try and post some different pics later and some incar vids.

Here are a couple vids, first one is the Vette, from May 2012, a comparison vid of my co-driver and I, my lap here is now the lap record for a closed wheel car at AMP.
Some roadies will know the track, they have raced there.

Next one is from a race in Que I did in our BMW e30 GT3, just a fun race, I was not supposed to drive this car that weekend, but our car got crashed the day before, so the guys let me do a race in this one. Its a fun car as well, not as fast, but very nimble and easier to race, you aren’t having to risk as much all the time to go fast. It starts to rain part way through this race and I struggle huge against the FWD cars, the just put power down better in adverse condition, my tires were not good for wet either, a medium compound tire, lost all of its heat.

This is an awesome thread, such a richly diverse group.

I spend time hiking and camping with my wife and 6yr old daughter. Having a beer, listening to my wife play guitar and watching my daughter dance in front of a camp fire is just about tops for me.

I’m a pilot with about 75hrs but have not had the spare cash to fly in the past 5yrs. (Would love to get back into it, maybe once my daughter is older.)

I own a 45’ wooden lobster boat, that a buddy and I keep in Pictou. We use it as a party platform and sometimes scuba dive off it or just sail around Pictou Island for kicks. Currently, it sitting in a barn with a big hole in it. Damn you Irene!

Guitars (playing and building), motorcycling, fishing and spending time with my kids (2&6) in my free time. And work for a company that makes pedals (not for bikes for guitars)…

Besides my pay the bills job, I have a 13 year old step son and 1 year old daughter to run after. We’re in to a bit of everything, racing motorcycles (but I’m taking this season off, at least that’s what I keep saying), touring motorcycles (the other half is planning to do the trans lab this year), we don’t currently have room for much of a garden which is good for my hanging in the hammock time but not so good for “what do I put on the table tonight?”. We’d probably brew beer but a friend is much better at it so drinking it can go as my interests, my latest geek toy is a RaspberryPi.

Basically if curiosity killed the cat, it’s a good thing I’m not a cat because nine lives wouldn’t be enough.
Oh and I like espresso, even cold because it’s better than no espresso.

Paul those cars look like fun! Went to see the endurance race last year at AMP and figure we’ll take in some more local car racing this year, you ever run it locally?

Guitars (playing and building), motorcycling, fishing and spending time with my kids (2&6) in my free time. And work for a company that makes pedals (not for bikes for guitars)…

Tell me more about these guitar pedals. Anything with some old school overdrive?

Tell me more about these guitar pedals. Anything with some old school overdrive?

We’ve got a few different drive ‘flavours’… check out the Fireburst, J-Drive, Cornerstone and Marquis:

Roostzombie : tell me what you’re up to with the raspberryPi… also, mad hammock respect. I have a few and “test” them regularly. Next step is to get one with built in rain fly and mosquito net.

Roostzombie : tell me what you’re up to with the raspberryPi… also, mad hammock respect. I have a few and “test” them regularly. Next step is to get one with built in rain fly and mosquito net.

We have one with the net. I love coming home from a night shift at the tire factory (my grown up job) and sleeping in that thing.