Discovery of homeless encampment in Halifax park highlights need for...

A Halifax man has stumbled across what appears to be an encampment in Long Lake Provincial Park -- a site where a number of hypodermic needles were left out in the open.

I would like to know specifically which area this is, I do quite a bit of running with my dog in long lake and this is a concern.

When I lived at the top of the Bay Road I used to see the squeegee kids hiking home after a hard days work.

That was 15 years ago but the new squatters probably appreciate the ease of access. Basically directly in from where Albert Walker Drive meets St Margaret’s Bay road.

Because it was discovered by a guy on a bike it probably isn’t there, but an entrance farther down. The trailforks might show something called Tim Horton’s face of Jesus, I’m betting its there.

Nice to know that someone is still biking there.

edit, had a look at trailforks, what they are calling Face of Jesus isn’t really it, but it is that general area. There is a trail that takes you out to the Bay Road from what they show on the map, which is where I figure that they are.

Ugh, misread a key point in the article. I was assuming that it was located in the narrow strip along smbr that dnr doesn’t include in the park. Turns out that it could be anywhere in wrandees but I’m guessing either near quick exit off of dunbrack or the spot I already mentioned.

There is a lot of this around HRM woods. I’ve seen many homeless woods camps while paddling, mountain biking or doing SAR activities. I suspect this is going to get worse as housing here is becoming damn near impossible to find at a reasonable price. I might even make a camp for myself soon, although without the needles.

My winter camp set up was pretty cozy, no needles though. Also had it a little too close to a trail despite getting far from one: the smell of frying bacon was too much for trail doggos 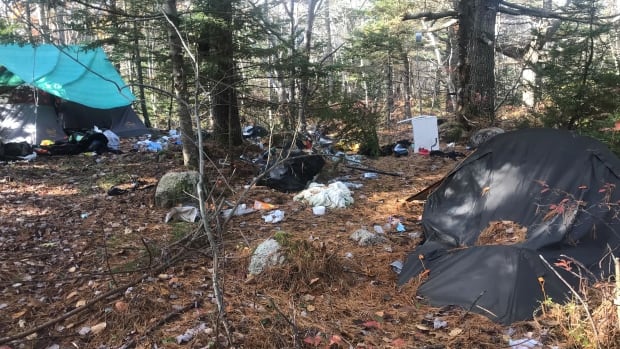 Three abandoned tent sites that were recently cleaned up at a provincial park in Halifax offer a glimpse into the reality for a growing number of Nova Scotians forced to sleep outside.

Pretty sure one of the camps was one I found 15 years ago. Popular spot.

We found one near Dartmouth crossing also. I imagine there’s lots out there. Sad representation of the state of our city/our people.