I specifically love the TAP program idea, and personally see it being beneficial here within our riding culture. 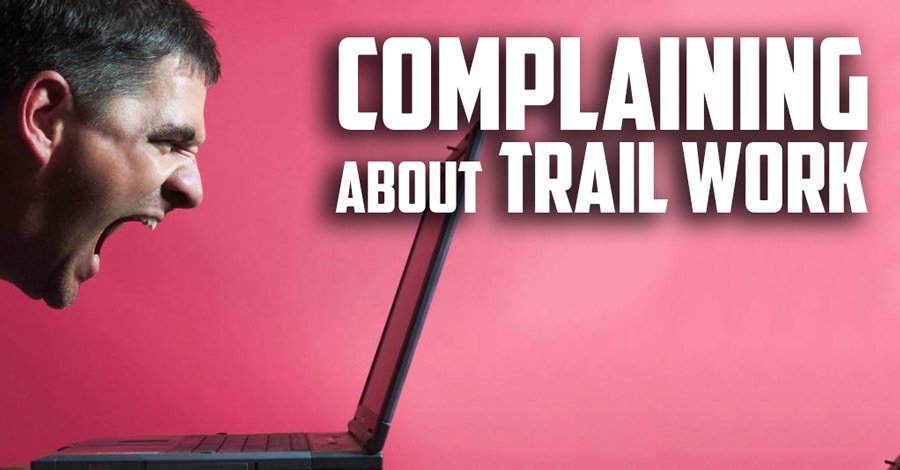 Bitching about the work others do on the trails you ride is definitely biting the hand that feeds you - but shouldn't some feedback be fair game?

« The general thrust is that if you don’t dig you have no right to be a trail critic. »

I do agree with that in a sense, however as a trail builder I would gladly take a recommendation from rider who has travelled the globe and seen how things are done with various terrain/tools and styles.

There are place in Canada with very engrained No Dig No Ride culture embedded into the riders, and from my perspective they have more trails.

I also don’t really think thats the correct way ahead in our scene, just an observation.

Speaks true in my case, last year I took some heat from said none diggers.

I never said, I don’t consult with people. I’m very open to ideas. I usually have someone whisper things to me and I usually go out and try to make it work.

I welcomed suggestions and line ideas from my peer group. The feedback was useful. Only thing I didn’t like were whiners bitching about how root sections should be cleaned up to make it smoother. I didn’t consider trailmaking work and enjoyed the solitude.

20 years ago this would probably work because no internet. Nowadays, anything goes. Either don’t go online or get a thicker skin.

Eeeek to the passive aggressive notes left on the trail with instructions!

Speaks true in my case, last year I took some heat from said none diggers.

I think it’s pretty difficult to know who does and doesn’t do trail work if they don’t advertise it.

You’re right. There’s a lot that I don’t post. As well as others.

But out of safety for other riders, I post the bigger stuff I do so people can be aware of the changes.

Not pointing any fingers.

Funny thing is, folks complain that people are putting their own time to improving the trails.

But not so much about the destruction.

This is from Suzie Q in the last two or three weeks. 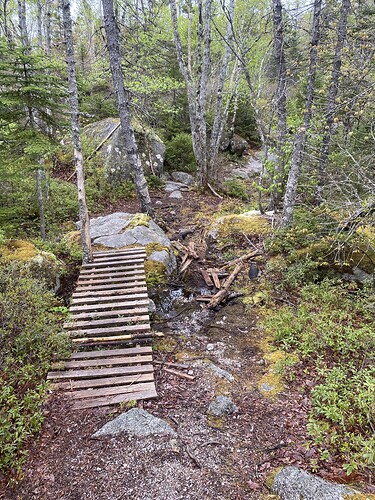 Old man on his moto says fuck it and goes right thru the little stream.

Interesting read. I wonder what the status of the trails they’re talking about are - sanctioned/unsanctioned/semi-sanctioned.

In the “old-school” NS mtb days, most of the trail I rode was unsanctioned. Building and maintenance was up to whoever wanted to go in and do it. Adopting an unsanctioned trail openly could be problematic as then the adopter could face liability. A TAP for a sanctioned trail could be helpful for the managing association, but how the association manages the adopting group could be complicated. I wonder how the group in the article deals with these issues.

I hardly ride unsanctioned trail anymore. There are many great sanctioned systems around now, and the quality of building and maintenance has gone way up.

With the sanctioned systems, complainers have someone to take their complaints to if they want. The managing association will have to decide internally what to do about those complaints. As part of an association myself, these complaints or comments can require thought and discussion. Will adding a feature or changing a trail (sometimes just maintaining it) change its character, and how will it affect the users? Sometimes what I regard as maintenance, a rider may regard as dumbing down a trail because it reduces the challenge. And because there are others in the association, you don’t always get what you want, because you don’t get to be king of the trail.

Another thought is that even though someone digs, they still may not know what they’re talking about - thinking about some of the features built at Spider Lake in particular.

I’ve done my fair share of complaining about the trail I work on most, but the more I dig, cut, or screw, the more appreciation I have for the work the original builders did, what they achieved, and in some cases, what they were trying to do that isn’t working now or has worn out from use.

It’s also humbling when you complain about a section, thinking it’s an easy fix, and then when you go to do it, find out it’s a lot more complicated than you thought.

There are some really interesting questions posed at the bottom of this article.

Here’s my take. I moved to Halifax from Wellington NZ in 2019. We were in Wellington for 8 years prior although I’d been there for university in 98-03. I was skateboarding in my teens and early 20s and only vaguely aware of the riding community.

When I arrived back in 11 MTB had blown up. There is, and always has been, a strong backbone of riders who have been willing to commit time and energy into organizing and digging in Wellington. I guess the fact that the Kennett Brothers made it into the MTB Hall of Fame illustrates the level of commitment. They’re just 3 of a core group though.

Wellington is the size of Halifax (c400k pop.) and blessed with hilly terrain. It gets forgotten about due to the other world-class riding centres in NZ. Rotorua, Queenstown, Nelson and Christchurch all get more notice. But Wellington is privileged due to the number of trails, that they’re spread out around the region and that there are trails so close to downtown. According to TrailForks, there are 201 trails and 215km of trails.

I think what they got right in Wellington was that the organizers got the city (actually 7 cities in the great metro region) involved very early on. The main city council has been engaged in protecting, planning and building trails for well over a decade. Council employees (not the poli’s) sit on committees for many of the parks. The Chief Exec’s of the municipalities sit on a leadership panel. Money comes from federal and local government as well as sponsorship to pay for trails to be built by machine. And yes, there’s still a large group of volunteers who devote their time to planning, designing, maintaining, engaging and digging trails. A huge amount of volunteer time goes into native tree planting also.

And while Wellington is certainly not immune from heated debates about trail design, people respect the time involved without resorting to finger-pointing over digging. There is a real push to ensure everyone’s needs are met from kids to grade 5/6 trails. Recently one of the original ‘old school Welly tech’ grade 4 trails has been flagged for turning into a flow trail and that has been causing a bit of grief. The park committee was able to shut it down simply and quickly by pointing out new grade 4 summit to car park trails were added and it was in the plan when it was consulted on.

The key piece that makes Wellington a fun place to ride is that trail committees are seen as custodians or guardians and not owners. There’s no ‘No dig, no ride’ bullshit and you don’t need to be seen holding a shovel to be valued integrated MTB community. Many people push bike-centric thinking every day in their jobs which helps immensely. MTB isn’t fight club anymore. The real groundbreaking work was done in the ’00s lobbying the local government as much as it was those turning up at Wednesday lunchtime digs. The politicians certainly aren’t progressive in Wellington but the MTB community has shaped them to get what they need.

There’s a pride that people get from providing awesome trails that is altruistic rather than selfish. Everyone’s circumstances are different and no one is (openly) going to begrudge someone who only gets 90 minutes to ride a week and never digs, they just want to make sure that 90 minutes is as fun as it could be. Tourists are welcomed (just like on ECMTB) and if you’re looking for riding suggestions you’ll get a lot of practical advice and invites to ride with people.

There’s a small issue of illegal trails in one steep hillside park where a group of young guys have built a grade 5 DH trail. The biggest issue here is that it’s the single habitat of an endangered native snail. Instead of coming down heavy-handed the community has been good at self-policing and working with the group to ensure that one of the next trail parks built will include grade 5 trails.

I guess what I’m saying overall is that articles like this seem to push the idea that MTB is still an exclusive sport rather than something for everyone. TAP is a good idea but is very local and has a very narrow focus. The difficult and long-term way forward is greater community engagement and involvement, lobbying local government to see the benefit of adapting green space with trails to give it utility for all manner of trail users. If they co-opt the willing within the communities they can end up with lots of valuable assets (just like MWRA and Rails to Trails). As the network builds so does the usage and the attraction for tourists.

Don’t know how I got on that big of a rant. But anyway, look at this website I found while I was writing it: Wellington Regional Trails

I’ll just point out one thing: The TAP program at nsmba, as it is currently configured, is quite community minded from my understanding, not really the old ‘MTBers who owns a trail’ model. It pairs a trained, experienced Builder (who is responsible to the association and trail system goals) with a corporate sponsor who provides cash and volunteer time. Most of the corporate sponsors are diverse, eg. the local Toyota dealer, MEC personnel, etc. The Builder is responsible for running volunteer events.

It’s a pretty good model, I think. We tried to lay the groundwork for this at the beginning of the McIntosh Run trails project. It didn’t quite take off for various reasons, but is something to get back to.

{edit to clarify: MRWA has hosted numerous corporate build days (where many folks are not MTBers, which is often the case for the NSMBA too). These have been successful and fun. But the full TAP is more}

I think if you had the kind of terrain that I envision NZ having, the only way to have a system would be very structured.

I also believe NZ, and also BC and Quebec are further ahead as communities overall as a mindset on outdoor space and why its important. NS seems to be catching on, and its obvious Covid Highlighted it.

Organized groups are paving the way, which is amazing and inspiring.

I think it would pretty insane to believe that everyone who rides should be digging or putting in work. Some people just don’t have the time for both. Fully get it.

I do however believe, that if you are a frequent rider of any particular system
You should be somehow involved in its sustainment and possible evolvement.

Egos are not gonna get anyone set up for success or lay trail down. Pride should however, be contagious. Theres a stark difference.

Just a walk through a trail any time with a looper is a big help.
In the fall and again in the spring a rake of the trail goes a long way.
If there is standing water. A quick fix, dig a trench to drain the water off the trail.