With the increased number of Fat Bikers out there there will inevitably be some conflicts with other users, particularly XC skiers.

I’ve even heard of a local areas’ XC skiers requesting (strongly) that dog walkers or any other user group not use the trails as to avoid impacting the XC groomed trails.* (Not verified at this point)

The traditional winter biking areas don’t seem to be much of an issue for those in HRM, but I see more varied users in the valley on the same trails, thus more potential for confilct.

What are your thoughts/experiences on Fat Bikes, potential user conflicts etc.?

I don’t have a fat bike but I sometimes XC ski (classic). It is annoying to break tracks for classic just to come back to see it all ruined, usually by people with snowshoes. It takes some effort to make good classic tracks.

I think other trail users can coexist with skiers, but they insist on walking / riding / snowshoeing over the classic tracks. Perhaps they think classic skiers are elitists.

Classic tracks only take up 30cm or so of trail, and here (correct me if I’m wrong) I think we are talking about relatively wide front country trails, not narrow single track. In that case I think other trail users shouldn’t ruin the classic tracks, it is just polite not to ruin work others have put a fair amount of effort into. And on public access trails with ski tracks there is usually plenty of room for other users like people on snowshoes to have their own tracks. Fat bikes are 100% compatible with snowshoe tracks (and vice versa) in my opinion. Riding on XC classic tracks doesn’t really seem desirable to me because they are so narrow it will be easy to sink.

On the other hand, if we are talking about skate skiing, skate requires more grooming effort than classic. In case a nordic club has been grooming skate trails then non-skiers should stay off the trails.

One other area of conflict could be with groomed snowmobile trails. Personally I think if responsible snowmobilers are grooming the trails they are probably using them at a safe speed to avoid killing other people who use their trails (since they know other people use them). But we should probably yield to them if they do the grooming work. And we should be careful riding these trails in case irresponsible snowmobilers use them.

I’ll assume we’re talking about places where motorized recreation is not permitted…My take is if it is a public trail, asking a particular mode of recreation to not use the trails is total BS. No matter how much work or effort is put into grooming for a particular purpose (winter or summer) if it’s a public space you can’t exclude people from using it.

Don’t get me wrong it gets my goat when showshoers tromp all over my ski tracks that I deliberately put way off to one side of the trails usually in the places where you have to dodge branches. They have as much right to be there as I do, it’s not their fault that there is relatively little sense of winter trail etiquette in these here parts.

As far as winter biking or fat biking goes if you can roll it, rock it!

This article is mostly focused on ski hills and access.
Interesting that fat bikes are banned from all US National Parks. 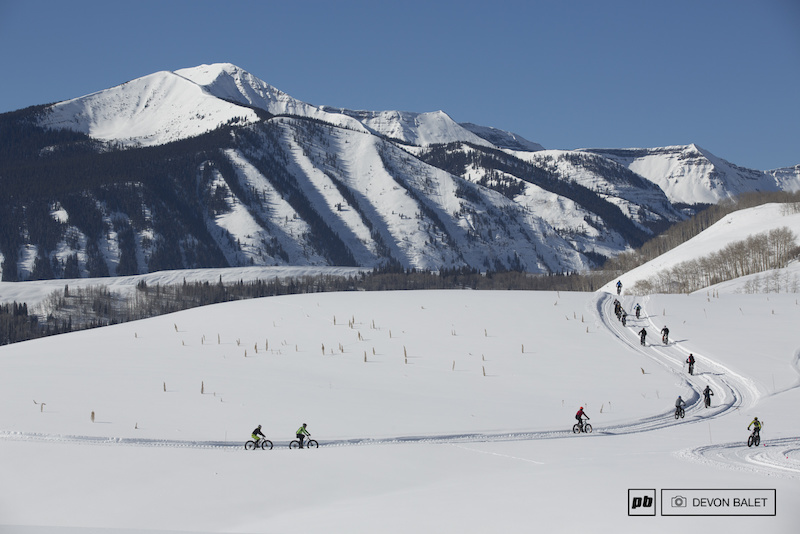