That was a great edit!!.. and mad skillz ta boot

I wonder how much suspension the tire is equivalent to. 2"?

I read that a 2" tire will absorb rolling over a 1" rock at speed without noticeable wheel deflection. So probably something like that to a first approximation assuming you are comparing the effect of rolling over a small bump on a hard surface on either a rigid fat bike with 26x4.0 tires or a full sus bike with 29x2.3 tires and 50mm of travel (assuming you have selected tire pressure according to some constraint, e.g. manufacturer’s minimum recommendation).

Obviously the actual dynamics are substantially different when you compare over all imaginable riding conditions. But much less different from a folding bike with 16" wheels @ 60psi.

So at the end of the day physics proves you need both bikes, heck, why not all 3 I have mentioned?

+1, for all the engineering speak and thoughtful answer!

Unless you have two fatbikes. 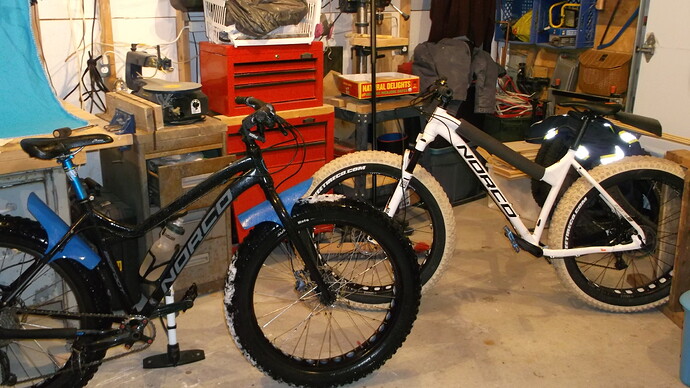 Nice touch with the fresh snow on the tire, @FatbikeRepublic !

I love the white tires. Saw those in our dist. catologue. Gotta order some in.