You can blame Eric Weaver and Michael Hebb for the ruts…

To their credit they rode it in the proper direction and turned back on 24 instead of going the whole way.

I’ll never understand why its rode in the wrong direction (against the flow and jumps) when theres so many other places to ride xc and not in the way of people jumping. That being said, rockin strava on a trail when its soft doing noticeable damage is quite shameful and publicly available information which they posted so yes i guess that is public shame

I think the issue with going the wrong direction has been more or less solved, the trail was changed a bit to make it flow better in both directions and arrows are there to guide.
L24 is as XC as it gets, its fast, flows well, sure there are a few little jumps but you can fly over them without even slowing down, so it will continue to cater to the folks that like to go fast, that’s exactly why I like it, one of the few trails where you can actually run a big gear and hammer, get some air, it flows well and its fun.

I know one of the guys mentioned that caused ruts, they are a very casual rider, and means no harm, definitely not deserving of being publicly outed as some sort of a-hole for doing it, also considering they turned around not very far into L24.

Wish i could agree with the direction issue being fixed but i still air out of the woods into a berm full of hikers or xc riders who “like the climb the other way” far too often.
Ah well, least theyre not at home glued to their phones

Lets TP their yards! Gaw, what a joke the mtb scene can be.

I still can not believe that the topic of direction on 24/25 is still even a thing but I agree with Tossedsalad and Nova. The mtb scene in HRM is a lesson in herding cats. Whats equally irritating is getting tangled up with other users on an Mtb trail. Its not that I m being exclusive I love seeing people out side and enjoying the results of my WORK. Having to stop riding/building to let 10 joggers go by in both directions is a buzz kill. Then to have a group of throttle twisters go out on warm days a destroy the trail, on top of lots of bootbombing and bicycle ruts. Its no wonder there is a backlash from underground VOLUNTEERS. it costs us time and money. That is also why there is becoming a backlash against Strava, Trailforks,ect. I use Strava, no one will ever see my rides. I don t post trails unless I ask the builders or its legal( which in HRM there is not much). Loose lips sink ships, sorry ECMTB ,but your not free from guilt here… I don t believe in the outing but just because you don t mean any harm, dosen t mean your not doing harm. This would not even bother me except that I m the one who has to go fix trails I ve already built mostly by myself. Don t ride wet trail and if you do(cause we all do), at least clean up after yourself. Bravo to MacRun! At last a legal trail in the biggest scene in Nova Scotia. Hope they get some permission for some teck.

I still don’t get it. I spent a lot of time building trails and loved that everyone enjoyed them to their fullest. The only thing that ever irked me was cheater lines just for the sake of cutting a corner and riding during the spring thaw. Never understood keeping trails a secret on land I didn’t own or from a more the merrier angle.

I love seeing people enjoy the product of my hard work and missed riding days, in exchange for a bit of respect by following a few posted signs. To all those respectful riders I say thanks, have fun.

For me, land ownership and permission are irrelevant, and honestly will probably never happen. So, if you’re there enjoying the riding maybe it’s in your best interest to keep it off the internet. Even this much press is annoying. I want to ride technical trails now, not green trails that will take 10 years to get permission for, if at all thanks.

When it comes down to it though, if you’re not there doing the work, you really have no idea what you’re talking about so I don’t care about your opinions, especially on the internet. 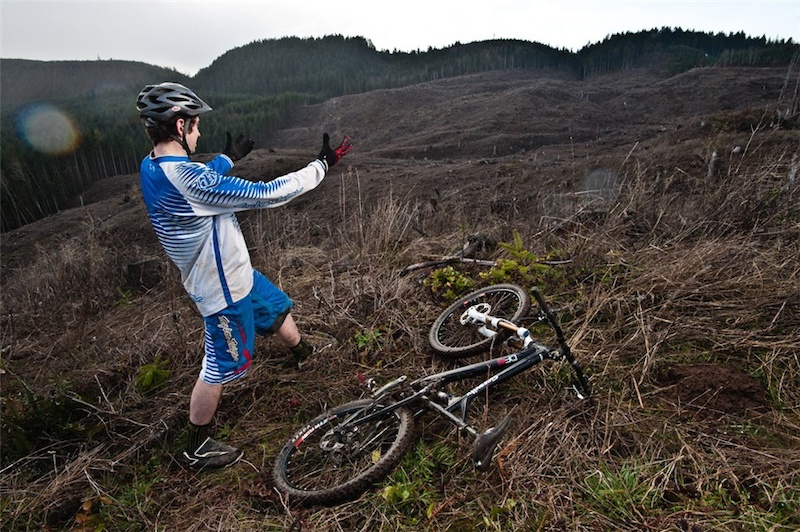 Opinion: Who Owns a Trail? - Pinkbike

We see this often, the internal conflict of "ownership" of a trail. Read on and let us know who you think "owns" a trail.

I generally agree with you T. Cheatlines are just that. if you have the time to make the cheatline you have the time to fix the problem on the OG trail. As far as the more the merrier well just look at the mess at fight trail. All that work to smooth out the trail and everyone ran over there and rutted the s#!t out of it. At least they ve got support . Then there s Spider. So many dog walkers, trail runners, four wheelers and now the moto idiots once a month. So little work done to maintain it. I look at Skull now and wonder how it got so wide. Then again it wasn t me who blew it up. Switch over to my new trail. Dog walkers, trailrunners, people getting hit because you can t use the breaks in the air and now moto idiots once a month. Yes its public land (some of it, look at the no trespassing signs), so the public should lend a hand or at least stay out of harms way. Right down to the point where I really don t want to clean up shit(human and dog) or fix damage done by abuse( one bridge, two step downs,and lots of ruts. Who s merrier? I am cause I have a trial in a different spot!

Just to add to this, and clarify… Yes, human shit. I came across a pile of it in the middle of the singletrack (between two large boulders too, so you have no choice but to squeeze thru this line). Someone took a literal shit in the middle of the singletrack (tp left behind too! Who the f brings tp with them to shit in the woods!!!) back on halloween day first thing in the morning.
Anyways. My biggest beef other than the damage to the trail is the disregard for the signs. If youre not gonna obey them at least dont slowly walk up the middle and hang out by the lip of a jump