Just up here today for the first time in a week or 2. Thought it best to report so someone does not get hurt. Main bridge is out. And someone removed the back side of the first jump. 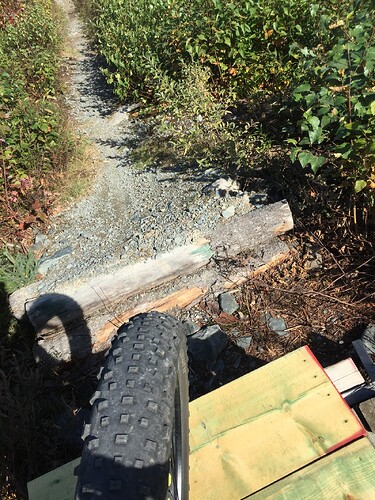 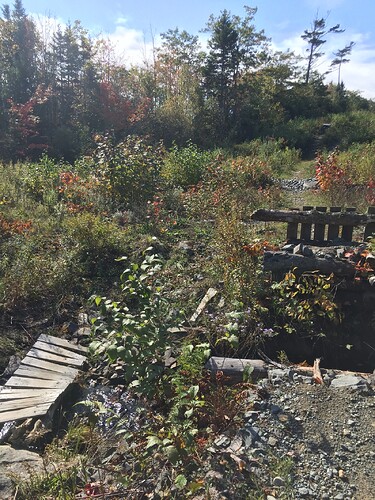 The top picture appears to be one of the intentional small gaps, i don’t think it ever was filled
The bridge was a casualty which either occurred from motos or intentional sabotage sadly

Maybe your doing it in the wrong direction?

Check who else has been riding it on Strava, they might know when it happened?

@sheldonmcq That little gap in the top picture has been a gap for years…until a couple of weeks ago when someone decided to make it not a gap anymore by adding a wooden roll in. It has been reverted to its original state with the extra wood being used to fix some other rotting woodwork near the top.

Don’t dumb down trails, there is a go around for this little gap, if you can’t ride it, go around.

OMG why am I not surprised that I get an elitist comment about my cycling abilities wile making any post about this trail system. This has been made into a rollover for well over a month, whoever donated the wood to the trail clearly took the time and money to make it a roller. Many people have been riding this trail, and would have “rolled” that during this time. The post was, as titled “be aware” for their safety. God forbid someone get hurt and it get back to N.S. Power and they then tell everyone to leave the property.
The post was not an opening for you to take the opportunity to be sure to tell Sheldon that if he can’t do a jump go around and don’t change the trail without asking permission from Brent, thanks.

This is a general statement, not directed at anyone:
Im not sure why its a touchy subject but we built this trail with intentional usage. I dont see any pushback when the thread topic was “dont change the trails we built them how we like them” for whopper/ da minion or whatever trail it was very recently

Sheldon : Brent didn’t attack you personally. It was a general statement, if you cant ride a feature, go around it. Dont change it. Etc. Anyways, I dont think he was attacking you or insinuating his comment was meant for you directly, more so general statement, as was mine. If you notice, the first statement is directed at you, and he explains what happened to the “jump” that was refixed back into a gap. His statement which you took offence to was a separate paragraph which i think indicates the general audience it was intended for and not you personally

Lol? Thats a good joke. You win all the funny points. The horse is dead, the only people still harping this grievance are people who dont ride it

Chill, it’s a funny reference to a previous overwrought subject.

Respectfully, I suggest not using term “dumb down”, as in if a trail is made easier to ride, it’s “dumb” implying that the people who are not willing or skilled enough to ride more difficult or higher consequence terrain or features are “dumb”.

That’s a bit of a stretch. Not sure what in that was elitist, nor had anything to do about your riding abilities. I ride around shit all the time, I wouldn’t take offence to a generalized comment like that.

Bents prior history is likely where Sheldon’s assumption stems from.

Personally I’m glad that Sheldon mentioned this, wether or not the feature was rollable or a gap doesn’t matter if you have only known it to be a rollable feature. So I thank him for the warning. The trail is pretty easy but something like this is still good to mention to other trail users who are not as familiar with the trail.

The second part of this response is more directed at a general audience rather than to you specifically. Cheers

I agree with you, “dumb down” the trail definitely carries a negative undertone directed at those who ride around. It may seem like a small thing but with internet communication, messages need to be clear and respectful, ideally free from negativity towards someone’s riding ability. It’s hard to read emotions over texts, so it’s a slippery slope.

I will refrain from kicking a dead horse. I think @Nova summed it up pretty well.

@sheldonmcq My comment had nothing to do with your riding ability what so ever. I was mostly reaching out to the people who put the roll in there in the first place… Anyone who actually knows me knows that I don’t care how skilled anyone is on a bike, It’s cool if you are skilled and cool if your just starting to ride. I don’t consider it a measure of anyone’s worth and I don’t care who is better, faster or whatever than anyone else. It’s all about having fun, not comparing reproductive organ size.

I ride around tech features and skip jumps when I feel they are above my limits but I would never ever think to make a feature I can’t ride into a feature that I can ride because I know there are more skilled riders who can ride it and enjoy it. So don’t make deliberately built features easier because you can’t ride them. It’s a pretty obvious general statement (or so I thought)

So now I’m going to clarify about that one gap because your timeline information is wrong. It has been a gap for years and only had a roll in on it for a maximum of 11 days in September and was only there for one weekend (Sept 12-13). It was reverted back to it’s original design on Sept 20 by another rider (not me) who doesn’t think people should be making the trails easier either.

The bridge over the stream was broken/destroyed on Sept 27 by persons unknown for unknown reasons. I will note that I received 2 punctures by boards that were placed (deliberately?) across the trail a bit further down the trail with screws sticking up on that same day.

I would be interested in participating in the repairing of this bridge, seeing as how I ride there quite often.
Please if anyone can give direction of how it should be done, and materials needed, I would like to move forward in some manner.