This is what T-boning a Beamer looks like on Strava.

28km/hr to zero, almost made it onto her roof but pushed off the car so not to end up under the wheels. No bike damage, a little road rash, and the nice white Beamer has a 3-ft long, red mark along the passenger side. Didn’t see it comming. Happend this morning. 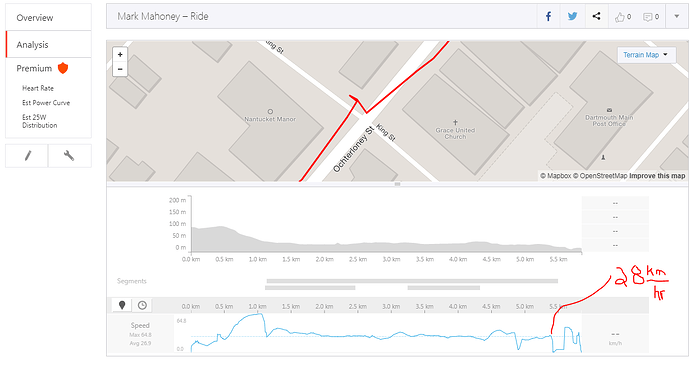 BNS collects data on such incidents, if you’re interested. Here’s the link.

Ya I’ll fill out the incident form, thanks.

This is why I feel safer in the woods then the roads >.< Thats going to hurt tomorrow.

Eep, hope you’re okay. Did you talk to the driver? I’m curious to know if it’s the same driver that I successfully took to traffic court for trying to run me over in a crosswalk a few years back.

@Nova, that reddit thread nailed it. Yes I talked to the driver, she was in worse mental shape than I was by far. She was very concerned for my well being, and mentioned that she is always hearing about these situations happening in the local news, but never thought it would happen to her.

As per the reddit thread and the big question of fault. The blinker decides this according to my RCMP friend, she did not signal. Her exact words were “I had my finger on the signal, but never clicked it in” . Also, from Bike NS;

Was she texting? Not sure…I wondered though.

if she didnt signal, theres no question whos at fault… Either way, Glad this didnt end up worse. When i saw the post on halifax reddit i was wondering if it was someone from here

Just to be clear, the Reddit thread didn’t originate from me…an unbelievable coincidence though.

Interesting comments on that thread. “Bike at fault because they have to stop at stop signs.” And cars don’t? I mean… wow, okay, sure.

Not signaling puts her at fault. Overtaking and turning into the path of a cyclist (or other vehicle) puts her at fault. Oddly enough, it was my bicycle commuting that made me buy a GoPro camera, not for recording any off-road or “extreme” activities. Having video is useful for having tickets issued. Also note that Metro Transit buses are equipped with cameras, so if any are in the area you can get the cops to retrieve video. Local business with external security cameras?

On a lighter note… ever notice the bike lane signs in NS or around HRM at least have a black diamond logo in it? No coincidence! Dangerous trails/features for sure lol

I had to create an account and set the record straight.

I was tempted to create an account to comment myself but i wouldnt have contributed anything more than just another opinion. Reddit used to be a decent source for local news and happenings but its gettin kinda foolish now with how out of hand discussions can get :s

Just reading this now.
This is crazy, I hope you’re ok, @glenfiddich. Jeezus.

Cripes man, that’s rough. I commute a lot too, and this is one move I’m always on the lookout for, because I’ve seen it happen. At intersections, I always make sure I’m either owning the whole lane as we go into it, or well back of any cars that could turn right into me.

Yesterday though, I bombed down Chebucto towards the Armdale roundabout in the clear right lane with a full middle lane. That was pretty stupid, honestly. Anyone could have cut into the right lane and I was doing 50 km/h, so I would’ve been pooched. Not gonna do that again.