Did you know that Scottish trials star Danny MacAskill has a familial connection to Cape Breton? This is the story of Angus “Giant” MacAskill, the museums dedicated to him on either side of the Atlantic Ocean, and his trials riding descendant.

Angus MacAskill was born in the Outer Hebrides, Scotland in 1825. His family emigrated to Englishtown, Cape Breton around 1831, likely as a result of the Highland Clearances. Angus was said to be an ordinary sized baby who began growing rapidly as he entered adolescence. By age 20 he stood 7’4", and eventually grew to 7’9" and 450 pounds. He was said to be “naturally tall” with none of the typical characteristics of pituitary giants. Some of his feats of strength included carrying barrels weighing more than 350 pounds under each arm, lifting a full grown horse over a four foot fence, and lifting a 2800 pound ship’s anchor to chest height. During a trip to Halifax Giant MacAskill became suddenly ill. He returned to Cape Breton and died peacefully in his sleep on August 8th, 1863. 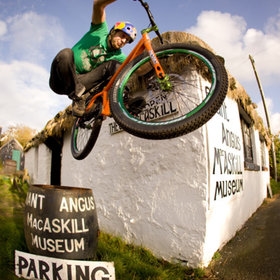 Further reading On a Tiny Island in Scotland, Two Giants in the Family - The New York Times