I’ve heard that ticks are out already. Just keep your eyes open and get em before they dig in.

Already? I was hoping the colder winter this year would have slowed them a bit, guess not.

Ran into Kaarin in Fight today, she said she’s found a few on her dog already this year. 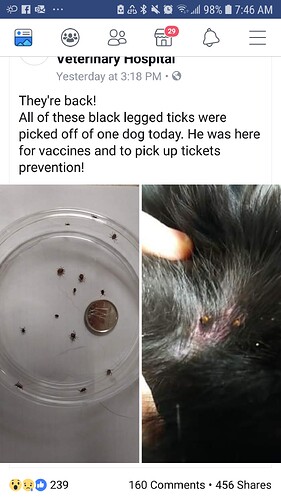 Hammonds Plains. So yes there are likely ticks at Fight and everywhere between. Lyme disease almost killed my brother and I would hate to see any of you getting it.

Those are freaky little creatures for sure.

Went for a family hike today at Nora Warren and picked 14 off the dog and 3 off me so far.

Is this some seasonal thing in the fall?

I take at least half dozen off myself every time when I’m in the waverley area, regardless of time of year. Others I know frequent the same areas and never have a single one. I think it’s all just luck of the draw. Safe to say they are always there. Always watching. Always waiting. Always biting.

I literally have never seen a tick in real life. Am I just the luckiest mountain biker out there?

Its not really seasonal, ticks are always around, as long as there is no snow and its above freezing. Its more that the conditions that the prefer and are most active in happen in the fall. In the summer when it is generally hot and dry ticks spend more time under leaf cover on the ground. The like it cooler and damp, so in the fall they can spend more time higher up on plants.

I picked one up 2 days ago, first one since June for me.

You absolutely must be. May the tick gods bless you

I’ve been out around the HRM almost daily either riding or building and I have yet to see one.

I’ve rarely had a tick on me, but I’m nervous of them - do not want Lyme disease! If you’re staying on the bike on trails where the vegetation is back from the trails, you’re probably less likely to catch one. I’m surprised that I haven’t picked up more, given the amount that I walk in the bushes while trail working. I picked up a pair of the “No Fly Zone” permethrin-infused pants at Marks over the summer for trail work, so they may have helped. Good to know they’re still around. With the cooler weather, I thought they might be declining, like the mosquitoes and deerflies.

I usually pull a couple of dozen off me a year here in HRM, mostly just still crawling but sometimes I have to get the tweezers out. I often spray my socks with deet, in the spring.

I give the dog Bavecto in the spring after the first hatch it lasts about 3 months ticks that bite the dog die within hours, Lyme isn’t as big a problem for dogs, I mostly do it to reduce hitchhikers showing up in the house.