Want to take some wood for a walk in the woods this weekend?

Trailflow is doing boardwalk rebuilds in Hemlock this week. One of the three boardwalks has already been done.

If you’re going for a ride this weekend, anyway - why not do it at Nine Mile, bring some bungies, attach some boards to the saddle and stem of your bike, and walk some wood into Hemlock Loop? Wood has been dropped at the intersection of the main trail and doubletrack trail (second intersection), and it would be great to have some help getting it into Hemlock, where it’s needed. You can drop it at the first boardwalk you run into that is two boards wide. Anything you can move is less wood that Trailflow or Nine Mile volunteers have to move.

Some of our volunteers are tied up with a boardwalk build, and won’t be able to move lumber this weekend. The first boardwalk on the Pitcher Plant loop (trail on the left as you go into Nine Mile) is getting rebuilt tomorrow.

Pitcher Plant loop will be closed tomorrow (Saturday). You can still use the rest of the trail - stay to the right as you go into the trail. 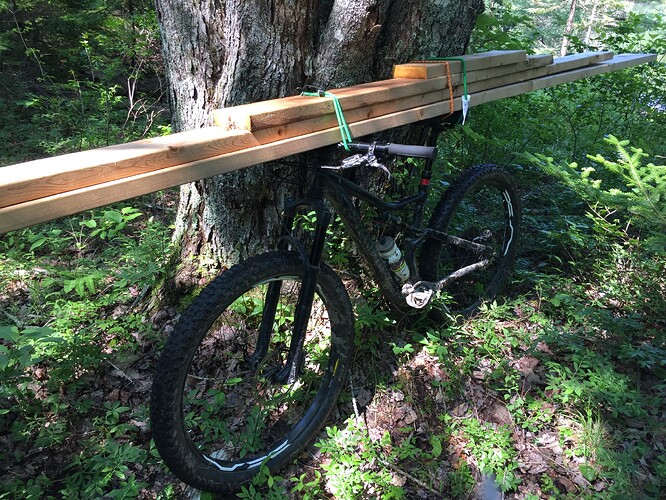 Took a walk at the trail tonight, and noted there is also a cache of wood just after the boardwalk with the hand rails. Please DO NOT move that wood. It will be used to rebuild the next boardwalk (the boardwalk the wood is stored near). It would be a shame if someone thought that was the wood we wanted moved, and we had to bring it all the way back from Hemlock!

As you may have seen in the other thread, the boardwalk build from today is complete and Pitcher Plant Loop is open again.

Planning to ride in to Nine Mile to move a few loads of wood into Hemlock tomorrow morning (Sunday) at 10am’ish.