What does it cost to fly with a bike?

I have a work trip to Ontario coming up and am wondering if it would be worth it to try and bring my bike.

Does it cost much to add a bike to checked bags?

Air Canada charges an extra $50 handling fee for bikes. It must be packed in a hard shell case though and it counts as a checked bag towards your allowable bag limit.

Assuming you don’t have a rigid case, it’s probably cheaper to just rent a bike from the nearest shop when you get there. Also save yourself the hassle of having to lug it around.

What do you do when you get to a place that doesn’t have any rental bikes?

Could you rent a bike in Halifax if you were a visitor?

Sorry I don’t want to hijack the thread Jeff…

Yeah I had to ride a rented Kona Stinky once at a Ski Park. Horrible experience.

@muddy in Halifax @Idealbikes has MTB rentals and down on the waterfront IHeartBikes has a fleet of cruisers for rent.

I didn’t know Ideal Bikes rented units. Good for them. I have a friend coming from BC in August who wants to ride while he is here. I was going to borrow but this sounds like a better plan

We general have a few full suspension/hard tails available. If he is interested, just contact us in advance and book it.

I’ve heard stories of people disassembling their bikes so they’ll fit into relatively normal size baggage (remove seatpost, handlebars, pedals, wheels, disconnect shock and fold up rear triangle, remove quick releases, deflate tires), and then checking it in as regular baggage… if asked, it’s “Sports equipment.” On the other hand, at the rate airlines lose luggage… it would be a heartbreaker to have your baby go missing.

If you fly with West Jet it is only an extra $25 per direction. Don’t tape it up too much before heading to the airport however as they will need to look inside the box and re-tape it up afterwards.

If you can make your bike fit into regular luggage size and don’t mind the extra effort then @Rockhopper is right on that is the best way because it is cheapest.

When I tour I just get a big sheet (500 sq ft) of thickest available vapour barrier and make a clear bike bag (I think a $30, 500 sq ft sheet will last me the rest of my life of bike touring). Less than 20 minute job: remove accessories and pedals, turn the handlebars & fix them with a velcro, lower the saddle, deflate the tires in case the baggage guy checks them (not that it has any effect) and slide it in the bag and tape it shut with red vapour barrier tape. Disconnecting your RD from the frame & wrapping some padding around it is a good idea, a bent rear hanger is the worst I’ve had with 9 flights packed this way (I had the RD connected to the frame at the time). The main benefit of a clear bag is that the baggage guys see it is a bike and they are actually more careful with it, it sounds counterintuitive but this is how a large number of serious tourers travel. It is the preferred method of the venerable CTC (now Cycling UK).

Since you are travelling for work it wouldn’t hurt to ask your manager if the company will pay for the bike transport, especially if you can use it to get to your work site – it could save them some gas money on the rental car so it’s almost a wash. I have had a bike flown to Colorado paid for by my employer at the time when I had to do some work there, I commuted on it to my work site a few times and got in a couple decent rides on off hours.

Neat. I would love to see a picture of how that goes together next time you pack it up like this @adam. 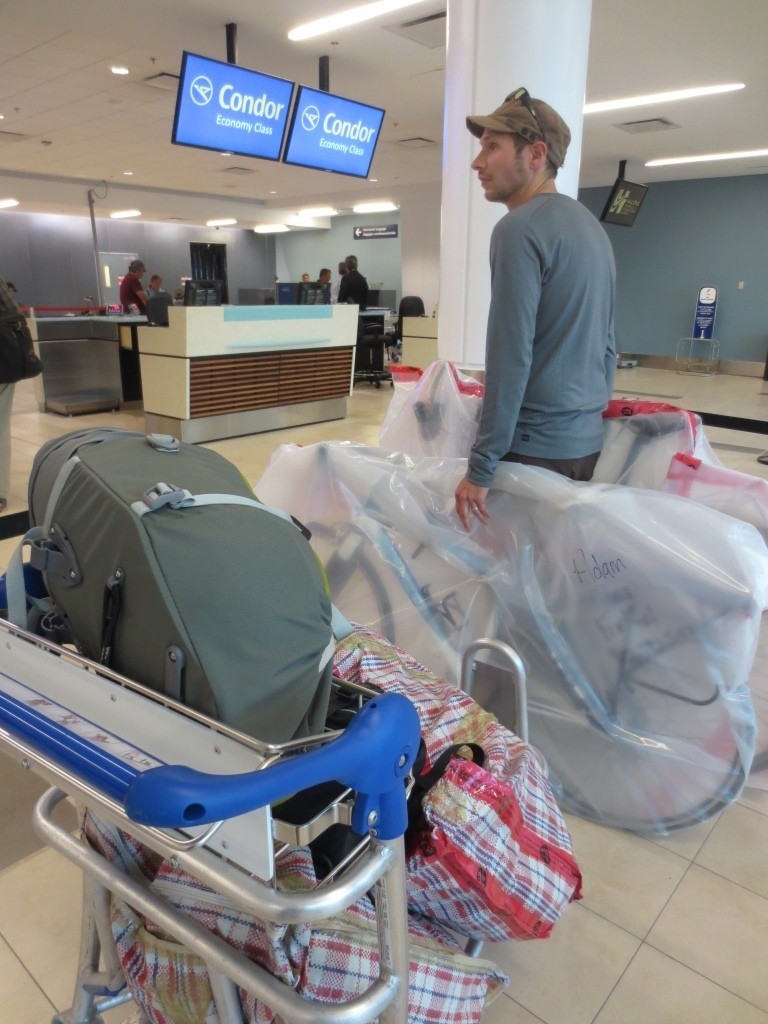 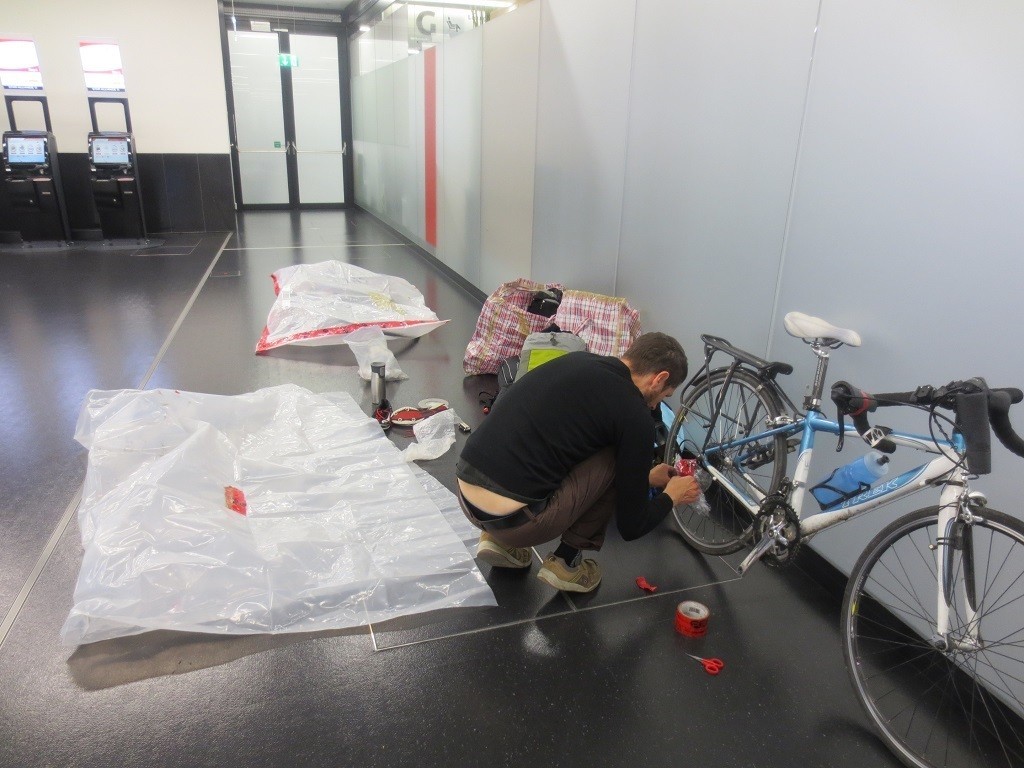 I suspect deflating the tires at least partially allows room for expansion because the baggage compartment is not pressurized, and the tires could potentially blow (having a gunshot sound in the baggage area could be a little concerning).

$25 or even $50 doesn’t sound too bad. I think it used to be $75 on Air Canada. I think if you’re travelling business class on one or both of those airlines, the bike travels free.

The difference in tire pressure due to depressurization is only 14.7 psi – that’s like adding 15 psi to your tires at sea level. If that will make them blow, then yes, they could blow. I suspect that is not generally the case for touring tires, but could be an issue for fat bike tires if they are pumped to their max spec.

I took my bike to Newfoundland in October, packed in a hard-case, flying with… Porter, I think? It cost me almost $200 one way. There was the bag fee, plus a bike fee, plus an overweight fee… never taking a bike with them again, and will avoid them if at all possible. I shipped it back via Purolator for closer to $140.

For my next mountain bike travel adventure, I’ve booked a rental bike. Given the number of flights I’m bouncing around on, it’s far cheaper to rent and far less hassle, too. Though as discussed with some folks: sometimes it’s nice to have your own bike.

I have a Bike Friday New World Tourist. It will pack into a Samsonite F’lite so it won’t cost more than an extra piece of checked luggage. It will take BMX tires up to 1.75" so not that amazing for mountain biking but probably adequate for some MTB with real knobbies. I have micro knobbies so better for gravel grinding than MTB. I also have road slicks.

I haven’t had the opportunity to travel with it yet but look forward to reporting on it when I do!

When I went to BC a couple years ago for a riding trip with buddies we packed our bikes into a bike boxes we got from our LBS. We had zero issues with putting them through oversize. We were flying westjet and we just checked them in as an extra bag and only ended up paying the extra bag fee, they didn’t even charge us the $100 or whatever it was at the time for over sized items.

We flew to BC last year with West Jet and had the same experience as a.mart … just had to pay $25 for the extra baggage