I just want to say that I am beyond excited for world cup racing to start this weekend.

If you have never watched a world cup downhill, I strongly recommend that you do. Replays are available for free on redbull TV, and they have a ton of other excellent content there as well.

Don’t forget to make your fantasy team on Pinkbike!

I can’t handle the suspense of the fantasy league!

One more year of free streaming, but it sounds like there may be a fee-based system on the horizon once Discovery takes over streaming rights for eight years starting in 2023. Hopefully that comes with a corresponding improvement in track coverage for the races.

I’ve got my maple syrup ready for the traditional (… traditional in our house at least!) World Cup and Waffles on Sunday!

hopefully the streaming is available in Canada. it was blocked last year for me on red bull tv.

All of the World Cups? Or just World Champs? Champs is normally blocked due to licensing agreements, but you should have no problem with any World Cups on Red Bull TV. If you do, contact your ISP and find out why they’re blocking it.

Damn. That sucks that it might get blocked
. Last year i wss usually out on my own bike or busy working at the time of the event. I was able to watch the replay on youtube though.

Is this weekends race in france

Same. Only one I couldn’t watch live was the World Champs.

Now that i think of it your right. Only one i watched live was champs. Good to know. Thanks!!

How many riders in total show up at the world cup events. We only get to see 20 that make tbe final…

Not exactly. Over 150 men try to qualify, the top 60 (and protected riders) get to race on the day, but it used to be 80. Red Bull livestream only shows the top 30. They usually show ~10 women but there are far fewer that try to qualify than with the men. For this race, there were only 33 women total. 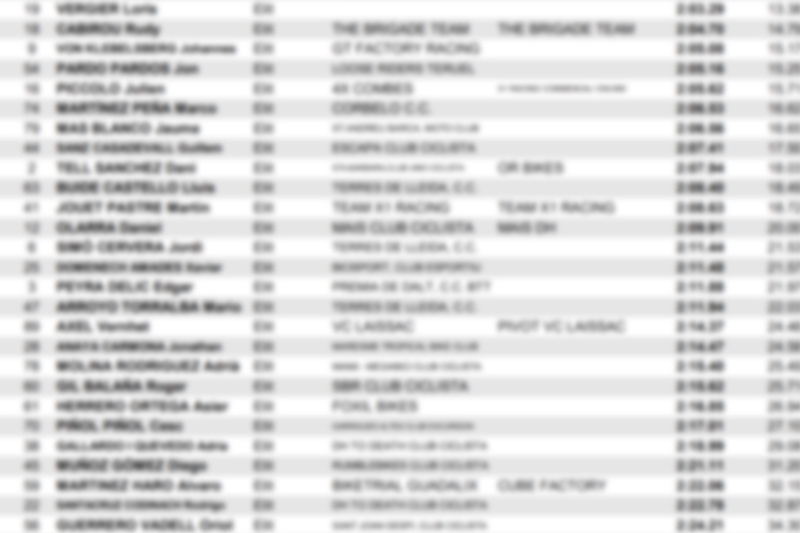 It's time to finalize your Fantasy League choices.

Oh wow i was curious . Trying to think how many runs they would be able to get in practice based on spacing things out between riders and so on

Apparently the uplift was the issue this weekend, as the wait for the funicular was nearly two hours, so many racers only got three practice runs. Usually they would do six to eight practices on the Friday, two to three before the qualifying run on Saturday and the same the morning before the race.

Most UCI races space out the riders by 30 second intervals.

Great race. I definitely needed that. Was happy to see Finn finally put in a solid result and not blow up on track. Bummed for a couple of folks that I would have liked to see go faster.

Way less then you would think.

The riders are at such a level of skill and confidence that it takes them very little time after a track walk to get up to speed quickly.

All the Pro teams collect data on the tracks from years past to dial in suspension, bike set up etc.

A track like that, minimizing fatigue and injury would also play into factor. But like @brightwhite said, there was some issues with the uplifts which caused delays.

There is alot more race content on the socials these days as well, most major teams manage that side very well and dive into alot of personal insights.

I was poking around youtube last night ans did find that commencial has a full on channel following the team . There was a 1 hour segment decapping last season and prepping for this year.

Pretty amazing p.r as opp9sed to more promotion of the bikes themselves. I know locally commencial is very very rare. Ive maybe seen 3 of their bikes

They also supply Supreme DH bikes to many of the privateers at a very good price, so lots of people are riding their hardware. I’ve owned a Commencal Meta AM for five years and it’s an exceptionally good bike, and they have been very easy to work with for warranty and repairs. Highly recommended.