We hiked the power lines today and found some anti Semitic graffiti on the rocks on the trail. My understanding is that there has been a resurgence of this lately. I’ve reported it/sent a photo of it to the ED of the Atlantic Jewish Counsel and I’m going to take my cues from her as to if I report it to the police or just go cover it up tomorrow. We didn’t go very far today. The graffiti is obviously stencilled and someone(s) hiked over 1km to put it there, my guess is there is likely more (seems like an odd spot to tag it once and leave).

If you stumble across any more in the future would you mind letting me know? Or document it and keep a note on the exact location so it can be reported to the AJC? Thanks in advance.

I’m fairly certain it’s not the gross work of anyone on this forum, but if it is, it’s despicable. In the future please use your hobby of spray painting for good rather than this unnecessary racist defacing of trail. You also owe an apology to the the Jewish community.

I’m down to go cover up any of these that get reported. Zero tolerance for that BS.

Me too - I’m friends with the AJC’s executive director so I’m hopeful she’s going to tell me go spray paint something beautiful on it tomorrow during my run. I’ve never done graffiti before so kinda excited to go live of the edge and get rid of this one! haha

Ugh. That’s all I can say at this point. And wtf.

Gross… whoever did this is slime.

Did you get a response?

Yup - The kids and I are going to go cover it up with some abstract art (because I’m a terrible artist & they’re toddlers so abstract is all we’ve got) as soon as it’s dry enough to actually work. I hoped we’d have gotten it done already but schedules/weather haven’t been on our side.

Unless the AJC has a good rationale not to, I think it’s a good idea to report it the to the police and send them photo documentation. It may not cause anything to happen for this incident, but if multiple similar “tags” appear elsewhere-it could be helpful.

Yeah, sorry that wasn’t clear. The AJC has photos and a map of the location more or less (circle on my strava route). I asked if they wanted me to report it to the police, but they’ve elected to do it themselves. I think they have ongoing relationships with the department as a result of this kind of thing so getting it kept together in the same file I think is a big deal for combating it.

I didn’t post photos here cause that didn’t seem necessary, but if the cover up turns out either amazing or hilarious, then I’ll share. Having with me, 3 dogs + 2 toddlers should equal a fabulous dynamic for this project. lol

There is more at the end of Flipside which fits the description in your original post. No pics, didn’t have a phone with me, but you cant miss it. Disgusting site to see on a beauty fall day in the woods with the dog.

Ugh, that’s disheartening. I’ll go out in the next day or two and document it and hopefully get rid of it. Brutal. Thanks for letting me know Chris.

We went back to deal with the graffiti that @Enduro_Performance found and another spot that a trail running friend found. The people responsible have escalated everything. In all we found 6 spots with Semitic messaging. They also went back and covered up the initial paint job that the kids and I did. We didn’t have enough paint with us to remove everything. We flipped some of the rocks they painted and tossed one in one of those massive puddles for now.

I’m filing a police report tonight. My guess is that based on the fact they went back to cover up what I did that they will likely go back again. Anyone have a hunting trail cam? They felt baited last time so I expect they’ll try to undo our cover up job. 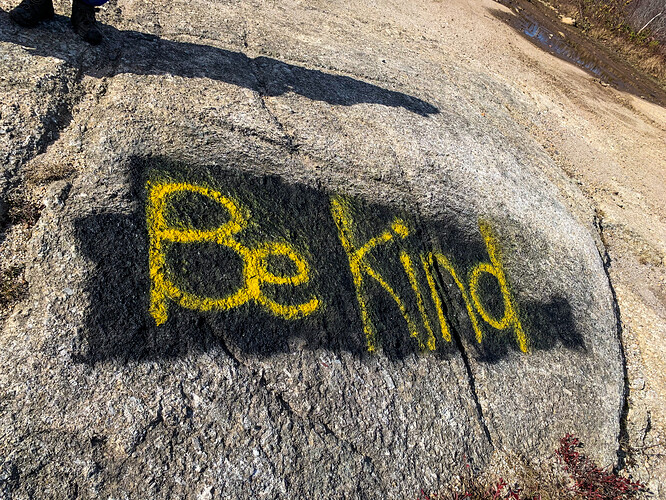 Thanks Sarah for your efforts on this. Filing a police report seems like the right thing to do. It’s appalling that such pathetic dipshits are not just in our neighbourhoods, but out on the trails.

A police report was filed and a member of the RCMP went out to look at the closet piece of graffiti today but he wasn’t prepared to hike the full trail. Basically he told me it didn’t qualify as hate speech and “might be considered egalitarian because it’s “anti-sexism””. I’m not sure why I expected better from the cops…

Anyway he said he’d keep recording incidents if we keep reporting them. I’ve got his email and will keep adding to the file as they pop up. He suggested we should hope the person/people escalate to the point the do it somewhere with a camera so there is evidence of it happening and they can be identified. So much of this seems backwards.

Out of curiosity what did you expect police to do besides record the incident? Aside from there being no cameras to record the incident, even if this was recorded as being hate speech as per the criminal code, without a suspect there really isn’t anything that can be done other than recording for crime mapping and comparing to other incidents where suspects may have been identified.

I am well aware there isn’t enough information to file charges or anything like that. At this point, it’s simply a report.

What I do expect is that hate filled language won’t be down played as “not that bad” or brushed off “maybe it’s someone who’s egalitarian”. I also do think it’s super shitty that nothing can be done until the individual escalates beyond the damage they’re currently doing. Given that there has been an uptick of anti-Semitism in Halifax since covid started and that there are other current investigations ongoing into anti-Semitic propaganda being put around the city that have made regional news in the last few months, that it not be a total surprise to the officer that this is a problem. It is backwards that we live in a society that needs shitty behaviour to become shittier before it can be dealt with - that just sucks. Also when I say, “I’m not sure why I expected better from the cops…” please watch my eyes roll. I don’t expect more, I expect less than I got today. This isn’t my first report to the cops that has gotten filed under “I hope they forget about it before we have to do something about it.” So yeah, I’m deeply disappointed in the reality of the situation, but I’m not naive as you seem to be suggesting.

Definitely wasn’t an attack on you, I was legitimately curious as to what you expected, as I always am when people seem to have an anti police tone, as for an uptick in anti Semitic issues, this thread is honestly the first I’ve heard about it, and if it’s been a problem in the city the Mounties may not even know about it as within HRM they only police the suburban communities.

Sorry for hijacking the thread folks, was just curious

Sorry - tired mum over here, over reading the tone your comment!

But yeah, lol, defund the police who obviously are not doing anti crime or anti hate prevention and fund something that will accomplish that. That’s where I’m at. I’m also super curious how a cop with only up to a year of training can interpret what will and will not stand up in court as hate speech on the fly while lawyers need 3 yrs on top of an undergrad to learn how to interpret and implement the law. So yeah, I’m fairly critical of their response to this…

Different convo for a different day and forum