Looking at a good deal on a C’dale Trail 29SS.
Never had a single speed and haven’t had a rigid hardtail since my 1988 Norco Bush Pilot. But I’m intrigued nonetheless.

Pros/ Cons?
I hear the eccentric crank adjustment can be a little wonky.
Feels light and I like the idea of a single speed bike.
Price is right, too. Not top shelf stuff, but maybe it replaces my Roam.

No…it’s NOS from a dealer.

I believe @CitizenKane has one

I picked one of these up last year. Its a Frankenstein of a bike, lets just get that out there right now.
But with that being said, i use this in the winter, as a commuter, its a real gravel grinder and eats up single track. Its like a road bike you can ride as a mountain bike basically is how i see it.
I did swap out some things that i felt were limiting the bike as i began using it in many different places, IE i put gears on it, new brakes and pedals. That is all, and boy has it changed its personality.
They cheaped out on the brakes, cranks and gears obviously to get this bike to the price it sells for, but the bike comes with a solid set of wheels and tires, the frame and fork are pretty nice also, so a great package to upgrade.
The eccentric bottom bracket has given me no issues to date, if it does i imagine its as easy as removing, cleaning and re-greasing and your set to go. I plan on keeping it so in the winter i can switch back to SS to keep the gears alive and well for the summer months.

It offers a lot of smiles per mile, and if you choose to keep it SS it is virtually maintenance free. I know when i looked into putting gears on it, everyone said i would need a new hub, but that was not the case, just a new derailleur hanger…

Here’s what mine looks like now, also i was advised to go with XL based on my size but opted for the large as it just felt more playful. Hope that helps! 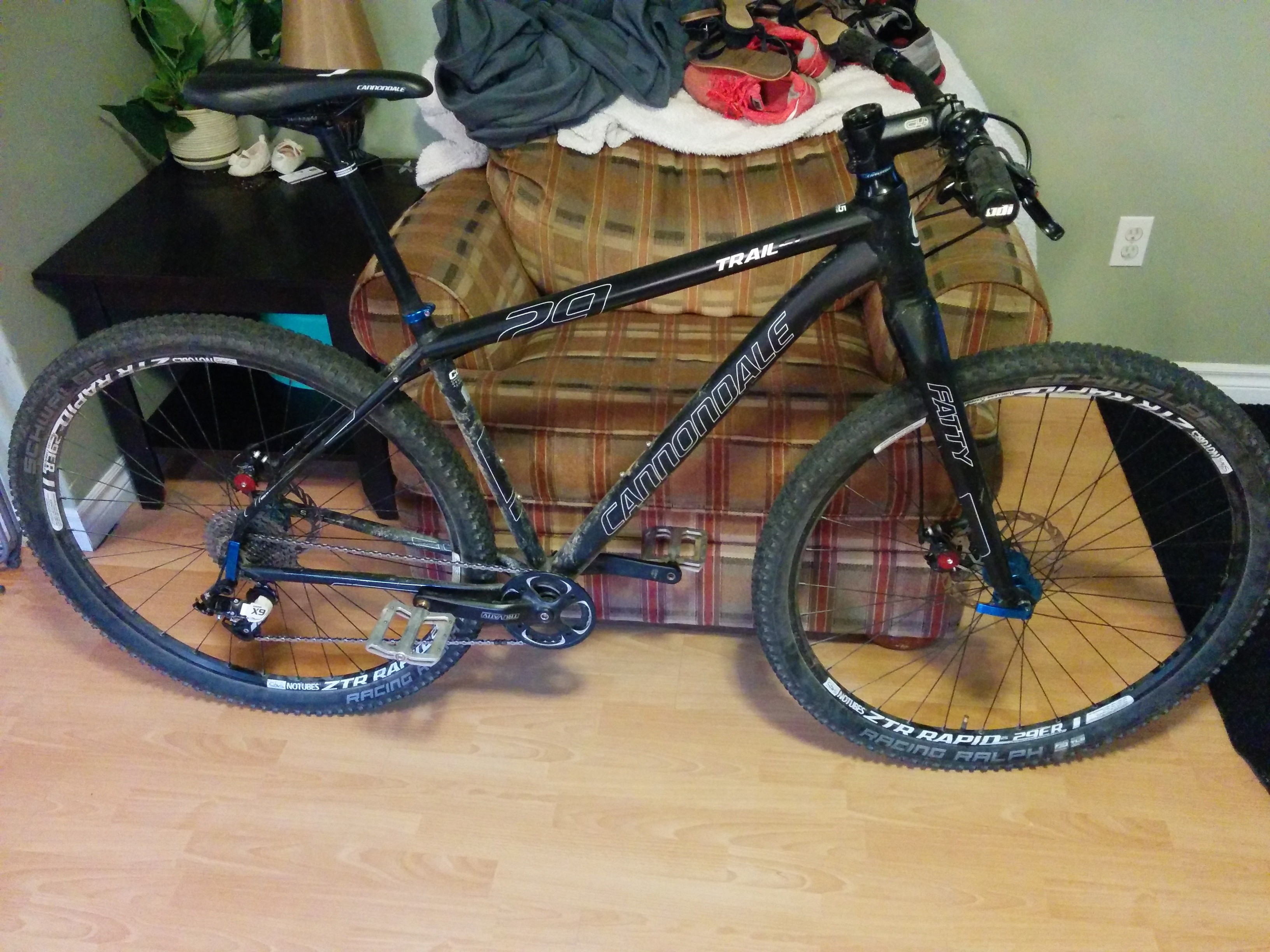 Could be a fun bike for sure… I ride a rigid 26 mtb on all the trails around without much issue. It is a rougher and slower ride but keeps the skills sharp. My road bike is singlespeed, the big issue is gear selection, too big and climbs get difficult, too small and you’re spinning out all the time. I ride 38x16 on the road and 32km/h is the max speed. I just stand up and grind out the big hills. For mtb i would probably go 36x16 or 36x18.

Thanks guys.
I took it out for a test ride yesterday. It’s close, but the medium is just a bit too small for me.
I could probably make it work with a longer stem, but it’s a tad cramped. All they had was a small and medium. He sold a ton of larges - mostly to commuters. I was at Cyclesmith

@CitizenKane - I don’t think I’d go the effort of putting a geared setup on it. I was attracted to the SS part of it. Having said that, it would take some getting used to. The 33x20 setup seems too short for any road road at all and a bit to tall for anything remotely technical. Maybe good for faster, flowy stuff. I agree, the brakes (especially the levers) are on the cheapy side. It did seem super light, and that made it fun and flickable.

It does seem like a good base, but I fear I’d spend most of my time and money swapping gears and parts. Someone (maybe on Pikebike) had a 2x2 SS setup. Two chain rings and 2 cogs. He said he could switch them in about 15 seconds. Again, interesting, but not a hen,

I think I’m going to fix up the Roam a bit, find a rigid fork and just ride it a bit more. Maybe save up for a real MTB next year.

I said something along these lines to you yesterday but if you put a rigid fork on the Roam I’d consider putting 26" wheel on the back at least – a 96er – you can likely find a disc equipped 26" rear wheel cheaply.

I would think something like 29 x 2.3 in the front and 26 x 2.0 ish in the rear would probably fit (within the chain stays I mean) without sacrificing the geometry too much and would be relatively inexpensive (rigid fork, 29in tire to put on your existing front wheel, 26in rear wheel, 26in tire). The BB drop would probably be OK even with a slightly lower rear end.

Full 26er setup might still want a 27.5 or 29 fork to avoid dropping the front end too much, not sure. Obvs you wouldn’t want to spend real money but if you get a rigid fork with decent tire clearance I don’t know if the Roam wouldn’t be an OK rigid MTB with bigger tires.

The budget committee has been meeting on this topic today. While negotiations are still ongoing, there is common ground on expanding the potential fiscal outlay for calendar year 2017 and possibly Q4 2016.

Capital budget planning for home infrastructure notwithstanding, there are positive indications of a net new 29er in the foreseeable future.