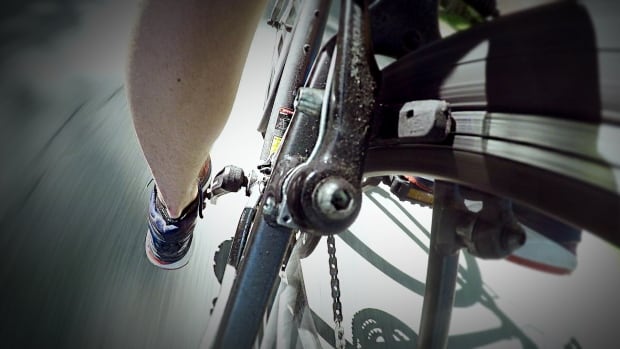 In this short documentary, CBC News interviews four people who've experienced run-ins with vehicles and drivers — from being tackled off their bike to sustaining serious injuries.

A good short doc. So many stories out there. I was almost run down by an idiot trying to get through an orange light, all the while yelling profanities at me. He then stopped in the middle of Brunswick enraged. Like the teacher in the doc, I decided to keep riding and he jumped back in his truck and took off. Not sure how a scuffle in the middle of a busy street would have gone wearing clipless shoes.

I know that teacher, he was a neighbour of mine for a while. Good fella. What’s most concerning is that with his exception, the drivers all got away with causing grievous harm. We could all add our own stories, I’m sure. A woman pulled out in front of me while I was in the bike line on the Bedford Highway heading to work one morning. With not even enough time to swear properly, I t-boned her and flew over the car, separating my shoulder on impact. Thankfully it was winter and I was well padded. Even better, a cop was on scene nearly immediately and possibly saw it happen. As a result, she was given 100% blame and all my recovery costs were covered. It was a long recovery, though, and that shoulder still gives me grief from time to time.

The trick is to throw off your shoes right away and drop your chain to the inner ring so you can hold your bike up and use the big ring as a weapon.

As funny as that is, police do use bicycles as a form of defense (and possible attack).

The new horsemen: how American riot police embraced the bicycle

As a new digital era of protest has dawned under Occupy and Trump, riot police across the US have embarked on a fundamental shift in crowd control

I’m going to stick with wearing my GoPro and hopefully documenting the situation so I can successfully take it through the courts, and leave the riot tactics to the pros! LOL!

Mountain biking is a safe activity.

Not according to the bicycle owners manuals.

As a bit of a tangent, maybe it’s just where I ride, but I’ve seen exactly zero police officers on bikes this year

In reading the news reports over the years seems to me that the majority of cyclists that are hit by PEOPLE driving cars boils down into two general categories:

Regarding issue number one, has anyone biked in an area with bike boxes/advanced stop lines?


While I have exactly zero urban planning knowledge, it seems like a relatively easy way to make cyclists at intersections more visible and shift the motorist perception. Currently it seems like most of the bike lanes in Halifax fade out at intersections for some reason-which always seemed counterintuitive to me.
1 Like