I’m a novice biker with the fortunate ability to be able to ride to a few places close to home for an occasional ride.

Luckily (or unluckily) enough, yesterday I almost had my day ruined by a pickup truck as I was riding next to the road (my front tire was easily 8 inches right of the white line to allow plenty of room for traffic) and this a-hole’s passenger mirror brushed my left shirt sleeve as he didn’t even move an inch going around me.

I’m sure many of you have been there - but that’s it for me. No more roadside trips in my area until there’s an active transportation lane (already started - maybe next year for completion) to help ease the idea that pickup trucks don’t own the road and the ability to use 100 percent of it. Some people just don’t get it and won’t until there is a physical reason not to drive far too close to bikers.

My bike is being packed and brought to trails until that happens. This hobby ain’t worth some jerk not paying attention.

Drive safe out there.

This is why when I do commute anywhere I plan my route to take me down side streets and thought parks and walking trails unless there is active bike lanes.

This sucks because I try to see there point of view and I can stand back and say “you know what, the joker was at fault that time” but most of the time it’s not the biker. It’s the a hole who tries to squeeze there vehicle by.

Motorcyclist have a similar problem when it comes to respect from other vehicles and I just can’t understand it. When people don’t respect other forms of transportation it gets people killed end of story.

Sorry to hear about your incident, I’ve had my fair share of similar incidents over the last 25+ years of riding the roads here. Overall I feel that there are more respectful road users than not, but there will always be exceptions, some people are just more important than others (sarcasm).

Did you add your encounter to the Bicycle Nova Scotia incident reports? I think having this kind of data is important for future planning of road infrastructure.

Driving on the road is probably the most dangerous thing I do on my mountain bike.

Agreed, I avoid riding on the road as much as possible…

@bent6543 I agree. Most are good and will move over for you so long as your respecting the road as well. What really sucks is it only takes one (ether biker or driver) to cause a lot of harm.

I agree, most motorists are pretty good but you really do need to be defensive. I live on the peninsula and have had my fair share of close calls, many in those while in “bike lanes” or the painted lines they call bike lanes here. One almost resulted in a fist to cuffs in the middle of Brunswick Street, fortunately that fellow backed off because I was wearing clips! Not the best purchase during a fight with a meathead. Stay safe!

And for the record - I wasn’t on the road but next to it.

No I get it. Much like someone out walking their dog or out for a stroll to their mailbox, it’s dangerous out there and I made it a couple of years before having a near incident. Either way, it’ll just motivate me to do trails - which is a good thing in the end.

That sucks. I had the same thing happen to me. Replace truck with white work van. I stayed off the road for a couple of years. This year, I bought a mirror and ride on the road occasionally. I time my rides a bit more. Never on a Friday after work and usually against rush hour.

When I commuted, twice a week about every 2 weeks I had a close call but I anticipated many of them and none were as scary as the van nicking me. Damn cellphones!! The only significant car accident I was involved in was also due to a guy driving while texting and he rear ended me in a construction zone.

Glad you’re okay. I used to cycle-commute year-round in Halifax and it can be dodgy out there at times, for sure. One close call motivated me to buy a GoPro. Everyone else is recording sick tricks and fun trails, and I was recording my commutes and filing reports with Halifax Regional Police. While it doesn’t save me at the time, I’ve had a very successful record in court when having tickets issued to these self-important jerks.

If anyone wants to follow that lead, some advice: be as specific as possible in your report and testimony. The first of my court visits seemed like it was cut-and-dry to me, yet the guy (who uttered a veiled threat to me before going into the courtroom) got away with it. Be detailed, be specific, be calm, and be sure of yourself. Confidence goes a long way to winning the battle.

Sure, it doesn’t save us while we’re on the road - but if we can make it difficult for these jerks to keep driving, then maybe we can make the roads safer in the future.

I don’t tell my wife about half the close calls I have. I ride on the road about 2h per day on average. A lot of that is in rural areas but no terrain has a monopoly on idiocy.

I’ve been riding on the road a lot more lately commuting to work, and after a couple of annoying interactions I’ve started recording video of all my commutes. I got 4 bad driving incidents on camera in November, only one was actually something that the driver could be issued a citation for, not giving 1 metre.

I did report them on the BNS form but honestly I can’t be bothered with cops, unless I actually get hit.

HPD and RCMP in this city are absolutely useless, especially when it comes to cars vs bikes. I’d recommend vigilante justice.

Unless someone is injured I’m satisfied with the bad karma they are bestowing upon themselves and maybe some social media shame from a monthly video where I don’t blank out the licence plates and post it to the interwebs.

Ohhhhhh please - someone start a drop point for this stuff. Facebook or whatever people prefer.

I think if we resort to vigilante justice, we’ll find that the police are suddenly much more skilled that they are often given credit for.

I’ve had success in traffic court where I’ve been able to provide video and a solid description of the event. If people continue to get away with being aggressive jerks, then they have no incentive to change their behaviour - until they do end up hurting or killing someone. Personally: I’d rather take the pro-active approach and have the police visit them now, as opposed to waiting for more damage to be done. To each their own, though; not everyone wants to go through the hassle. But I’m stubborn.

I like the idea of a drop point! Social media shaming, the modern-day justice.

Speaking of social media, here is a huge part of the problem.

Back story : The MLA in my area who uses Facebook and Twitter as a great tool to communicate with his community members, recently asked for feedback regarding transportation issues in our area. Last I checked, there were over 150 responses. Some irrelevant, some ignorant, and some just thanking him and giving some ideas.

The latest response showed me a huge problem that may very well never change with some.

Someone gave a simple response of “More passing lanes” - effectively as a response to someone else saying “Less passing lines” which is true. Why do you need to pass in a 50 zone? Oh, because you are speeding. Riiight.

And after the Passing lanes comment, came some responses from others with the same mentality to a new ATL (active transportation lane) in this community. 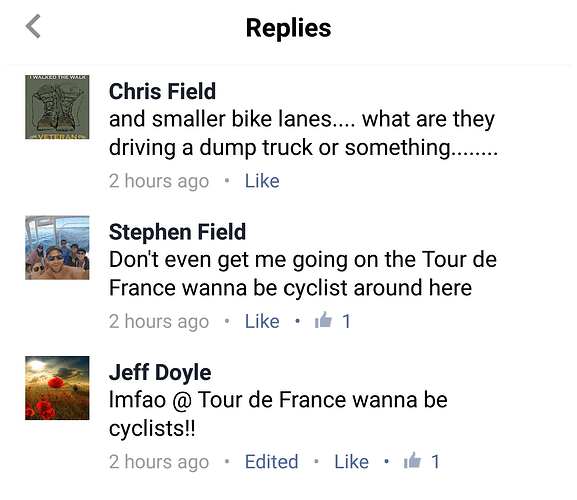 I know most of us here agree on the subject matter, but it’s really aggravating to see how close minded people are to any change. I mean a ATL here barely affects your day. I drive by one every day and its of absolutely no inconvenience to me.

So I have to agree that it may very well take some stiff penalties to get people to WTFO and respect the others around them who have a right to use the ATL which are now in essence, a part of our transportation link to the rest of HRM.

If anyone has any ideas for a “drop point” I’d very much like to help out as I want people to be educated about the safe operation of their vehicles in order to keep some of us here (and others we know) safe on or next to the roads.

Is a Facebook page the best way to go if users could even send in their videos to be posted by an account other than their own First name - Last name account?

Seems like the best starting point to me as it seems media and a greater part of the public use FB.

Or - is there a ECMTB page already?

@LetMeRide29er Don’t let the trolls bring you down, some people will never respect others.

I’d gladly contribute video to a drop point but it would have to be anonymous.