Sunday night is pizza night for Rockhopper and CyclingGirl. The World Downhill Mountain Bike Championships are also this Sunday - and we’re going to watch. If anyone wants to join us 5:30ish on Sunday, for 'za and DH, send me a PM, and I’ll message back with directions to our place.

Who’s it going to be?

Aaron Gwin and Greg Minnaar have been flying this year. Troy Brosnan and Loic Bruni have been fast. There are lots of other fast riders out there - Danny Hart, Sam Hill, Gee Atherton, “the Canadian Chainsaw Massacre” Steve Smith… who do you predict for 2015? 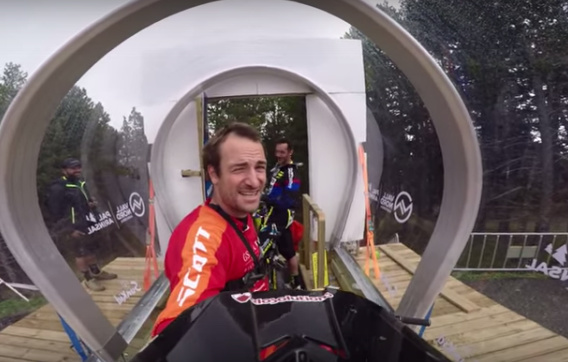 The final show of the year is about to get underway, get on board with Claudio for a preview of what's in store in Andorra.

As usual I will be camping but might have some PCP (Pictou County Pizza).

My money is on Rachael and Aaron… he’s been shockingly fast this year!

+1 for Rachel… in a different league really.

Would love to come over Eric and Janet, thanx for the invite… but the wife and I are heading for Yarmouth for a bit of R&R.

If you don’t make it to our place, you can watch on your own at www.redbull.tv.
Hope everyone has a great weekend.

They were interesting races. The track was rough, slippery and steep. Lots of crashes.

Rachel Atherton (Great Britain) has been on fire all season and is the 2015 women’s champ. Canadians Casey Brown and Miranda Miller got top 10 finishes - 7th and 8th - and Casey Brown did that with a crash so she was flying.

In the men’s race, Michael Jones of Great Britain held the hot seat for a long time. He had a really good bottom section of the course that no one could beat. Finally Josh Bryceland, Greg Minnaar and Loic Bruni were able to top his time. Gee Atherton, Aaron Gwin and Troy Brosnan all crashed. Brosnan got 6th even with a crash, so he was really moving. This year’s champ is Loic Bruni (France), a guy who’s been on the podium for a lot of races this year, but just missed winning several races, so he seems deserving. Canadians Mark Wallace and Steve Smith were 12th and 18th.