I’m looking at ordering a tubeless conversion kit from Fatty Stripper, but noticed the high price of shipping: $14 for a full conversion kit. However, it’s only $20 shipping once a second kit is added. SO, is anyone in the Halifax area interested in placing a bulk order?

(I’m open to alternatives if bike shop reps (cough) @riderx (cough) have something to add.)

I’ll be going with the red bling strips to match my red bar ends and pedals. If I can’t be good at riding, then at least I’ll look good while doing it!

Everything I’ve read suggests these are easy installs and work well. I’ve pulled a few ghetto installs in the past and am happy to leave them in the past if I can help it.

The closes I can see is the Stan’s No Tube option, but the cost is significantly more. I’d be interested in how it works. It may just be the alternative between a gorilla version and Stan’s.

From the reading I’ve been doing it has the advantage of weighing WAYYY less then the gorilla tape and split tube options and and unlike gorilla tape your sealant wont be absorbed by it. They apparently have really good burp protection when using the Foam Backer Rods on hard to seat/non tubeless ready rims like mine.

brother your’e getting faTshionista! i think i might be up for this .pm you! - aaaand i just check my fatrims its doesn’t have any hole on the center i guess i don’t need this after all.

@shadowfox70 If you want to go tubeless, you won’t need the bling strip or stealth strip if your rim doesn’t have cutouts, but you still need the latex strips to seal the rim from leaking (spoke nipple holes). Like @Chris_Dwyer-perkins said, this seems to be the best and lightest way to go tubeless on a fat bike with non-tubeless wheels.

If I was going to out tubeless I’d definitely go in on this, but at least at this point I think I’m going to stick with tubes.

The only time I really had a problem with flats was the year I spent living in Australia. It’s a weird country, even the flora is out to get you! So many pinhole punctures and the Stan’s really made a big difference. I’ve been riding tubeless ever since. The fat bike is the first non-tubeless I’ve ridden in a long time and I haven’t had any issues yet (knock on wood). For me, I just don’t want to be changing tubes in the cold. Anything I can do to minimize flats is on the table.

@shadowfox70 You might not have the cutouts, but the tech specs suggest you have a single-walled rim. You wouldn’t need the reinforced “bling strip” if you wanted to go tubeless, but you’d still need the latex strip to seal everything up. I’d be happy to help you out if you want to do the conversion. I have some extra tubeless valve stems already, too.

Fatty Tubeless would make a great name for a punk band.

thanks brother, yes i would love to go tubeless soon. how was the ride at spider with the fatties? did you had some studs out after the ride?

I set my fatty up with fatty stripper rim strips about a month ago. I ordered only the strips and got some sill gasket (opted for this over the foam backing) from kent as well as some stans and valve stems from the LBS. Aired up with cheap floor pump and have been holding ever since. Super easy install. I’ve struggled with gorilla tape methods in the past but this has been solid and lost lb or two. +1 for fatty strippers!

Very happy to hear a local testimonial, thanks!

Sweet! Good to know someone around here has played with them some.

So: @shadowfox70 I can put you down for a rim strip? How about @riderx & @Chris_Dwyer-perkins are you in for anything? Anyone else?

@IanM_MTB let me know when you go to order. I will come over because I will also need the foam backers and it will need some info about my rims and such.

I’d like to order today. As for the foam backers, I’m thinking about picking up a roll of Sill Gasket and making my own. I’ll hook you up with some, I’ll have lots left over.

Conversion kits arrived: red for me, blue for @Chris_Dwyer-perkins (who has yet to do the install). Tires held up just fine at the fat bike festival on Sunday, and though the process was simple I will say I’m not overly impressed with the ability of the “tubeless ready” tires to hold air without a tube or sealant. I put them in water and could see little bubble escaping through the sidewall - the famed “pinhole punctures” I’ve read about. 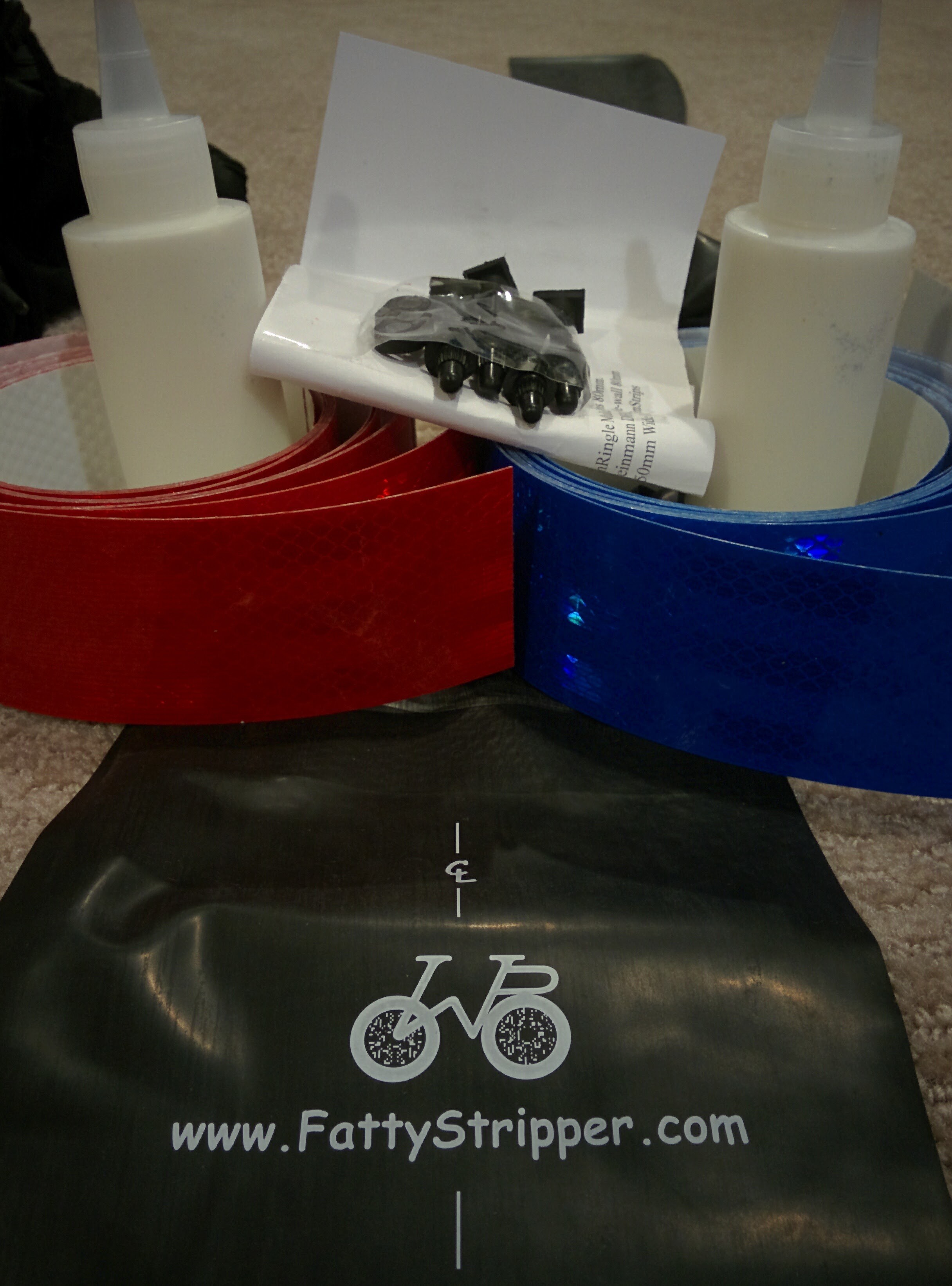 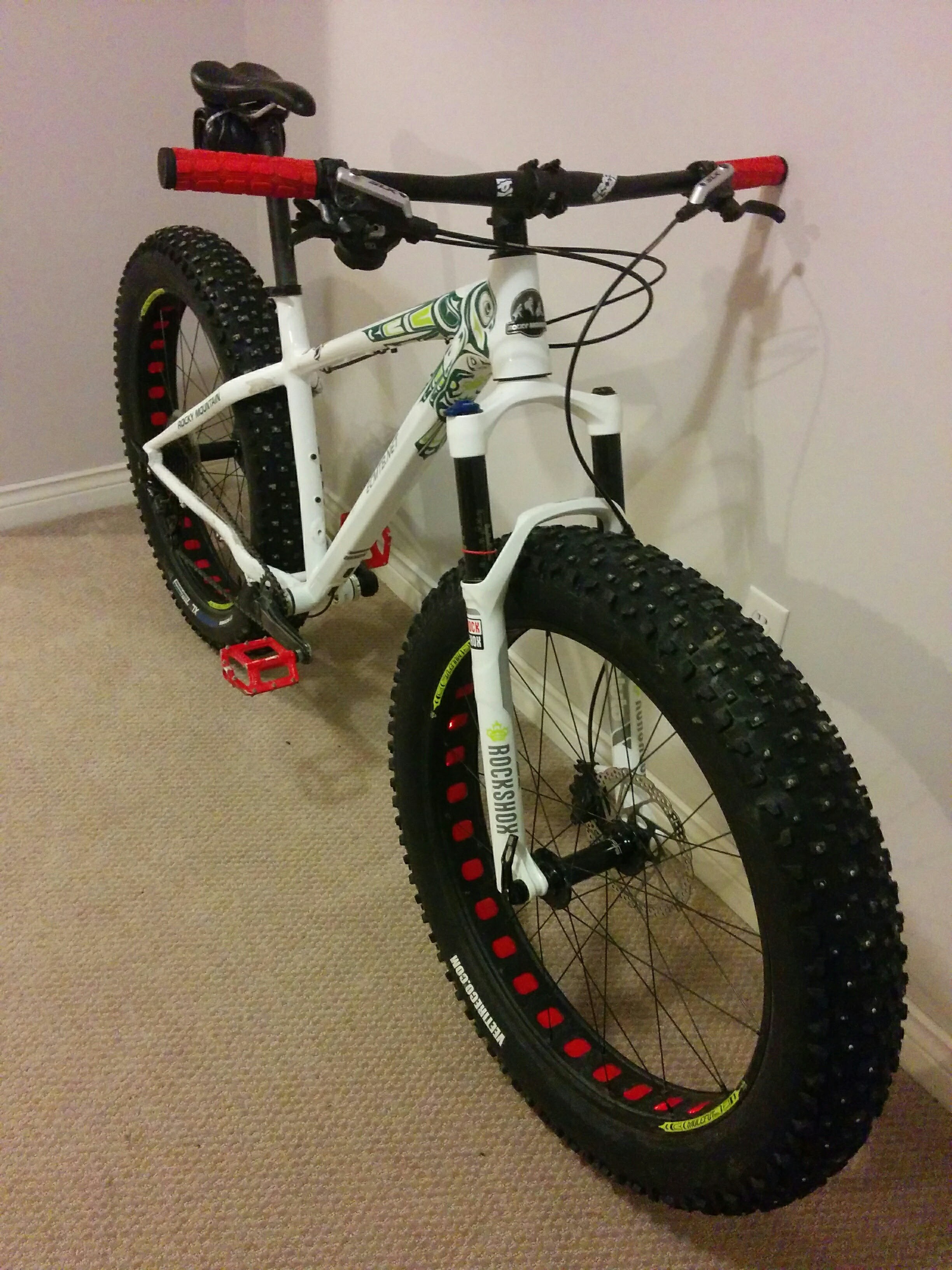 Should look funky on the night rides!

That makes me wish I had bought the bling strip now! That’ll look really good at night!