My bike got trashed over the weekend so now I’m going to scope out a new bike!
I’m hoping to get a hardtail and my budget is $1000 give or take a bit.
I am hoping to get Something with disc brakes and a decent fork that will hold up to trail use. I ain’t doing backflips or anything crazy but I want to be able to hit obstacles and drops or jumps at least waist high.
Any reccomendations?

I recommend the Tokul 3 for my friend and it was a really solid build and spec for the price. This year the 3 is a plus bike and the 2 a normal wheel. It’s really aimed at a all mountain experience rather then cross country like most hard tails.

I know @rossw can give you some good info on that bike as well as they carry Raleigh at Ideal Bikes.

I have been recommending the Giant Talon 3 or 4 to people also for a well equipped hard tail.

Pm’d you tom, about my giant Reign!

In that price range, if you’re looking for a bike to do “drops or jumps at least waist high” I’d recommend a good used full suspension over a brand new hard tail.

@Tomfona, might be a bit tall for that one @shadowfox70.

That’s a good thought! I imagine the bike stores sell refurbished bikes too so I’ll keep my mind open to that.

I have to agree with @Rolls on this one, a good used full suspension is probably a better choice if you’re going to be riding rough stuff. If you spend the money on a hardtail you might find yourself wanting to upgrade sooner rather than later. Food for thought.

PS- whatever you decide to get, budget for a dropper seatpost. It’s a real game changer.

Yep might be. Anyways +1000 for a Full suspension bike.

Felt has some pretty sweet hardtail builds for reasonable prices. You looking for 27.5 or 29’r?

That’s a good thought! I imagine the bike stores sell refurbished bikes too so I’ll keep my mind open to that.

The main shops (cyclesmith, bicycles plus, etc) don’t typically sell refurbs. Your best bet is probably the bike pedaler, long alley bicycles or halifax cycles. Or a shop that might be selling off something from their rental fleet.

pinkbike or kijiji of course.

The giant talon is a good choice for a hardtail. Best bang for your buck in the industry hands down. I work in the industry and giant makes about 6 million frames per year, (mostly for other companies like scott, trek, felt etc.) which means they can put better spec for a better price.

A used Full suspension is a good option. Check the bike over well or have a friend help with that.

I’m willing to help anyway I can, I work at Valley Stove and Cycle in the valley. How tall are you?

I’m 6’2".
Guys thanks so much for the input.
I certainly am not as advanced a rider as many of you on here but still need a bike that can take a good hit or two.
I will certainly be checking into the models you have mentioned and let you know what I find.
Cheers and thanks

At your height, you will find the Felt branded stuff will fit well. Their Large is 21’’. I find tall riders pretty much always say the Felt bikes fit best.

Alright so did get a chance to visit a few of the shops today. I went to cyclesmith, idealbikes and bicycles plus. Last night I had stopped by sports wheels in sackville too.
The bikes I was looking at were:
Giant fathom 2 $1299
Giant talon $1049
Rocky Mountain growler 730 $1099
Norco fluid 7.3 $1249
Norco storm 7.1 $899.
Or what it’s worth I would have liked to see the Raleigh Tokul 2 which retails at $900 but they didn’t have any in stock.
I rode both norco bikes and the Rocky Mountain. I liked all three although the fluid and the growler seemed to be practically the same bike. They both gave me a bit of a trepidation in one regard. The suspension fork on both rebounded to the top with a mighty clang! This was only from me loading the fork and popping up to come off the curb… not anything strenuous! I asked the guy at bicycles plus and he said it’s called topping out and that it is what wears forks out just like bottoming out. That’s why I looked at the fathom 2. It has an air suspension fork rather than a coil. How big a deal is this?

Some topping out noise from an inexpensive coil fork isn’t all that unusual especially if the rebound is set really fast.

I’m a poet haha it was loud though

Found a used bike in great condition! Definitely a nicer bike than I my abilities deserve but I was planning on improving as a rider anyway. Whoooop!!!
Giant trance 3 2011 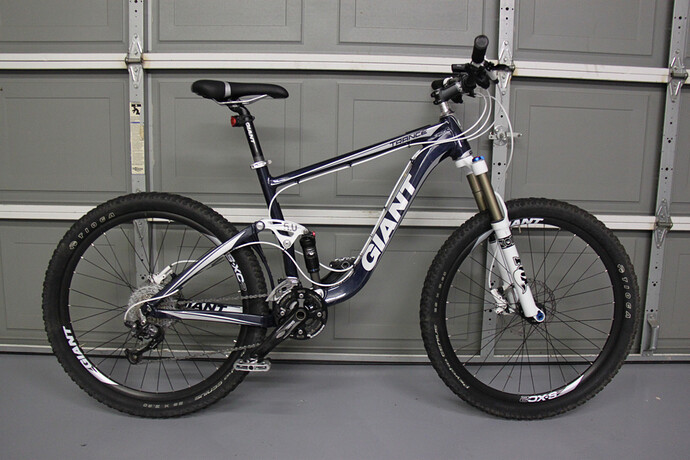