Thought the story on CBC website was of interest. http://www.cbc.ca/news/canada/nova-scotia/macdonald-bridge-bike-lane-protest-rush-hour-delays-1.2664557

Kind of mixed feelings about how they are going about the protest, but I am pissed off they still havent opened one of the lanes up yet as someone who lives in Dartmouth and works in central Halifax. I hate that shuttle. Filled with free loaders who would normally never pedal or walk the bridge, and the reports of bed bugs being found. I cant see why they couldnt just open one of the lanes a month ago to share among pedestrians and bikers and keep the other side to themselves to leave their equipment on. I have my doubts they will meet their new target of end of June.

I’m not a fan of the protest and I’m not sure it will accomplish anything other than letting people vent their anger. However, given how slowly most people proceed across the bridge in rush hour, I don’t see why a few cyclists couldn’t squeeze in and join the flow of traffic. Nice to see that HHB are working with the protest instead of fighting it.

If I get road raged at today or tomorrow morning I’m holding the protesters responsible.

The trolls are in full force about this one as to be expected. Someone even started a hashtag idontsharetheroad.

“Cyclists should pay a toll!” How many cyclists would it take to do the same amount of damage to the bridge that a single car does?

“They have a FREE shuttle, stop complaining!” When the shuttle isn’t on schedule and it takes up to an hour to get across the harbour for a trip that could be biked in 5 minutes, people have every right to complain.

“#idontsharetheroad” HRP should keep an eye on that guy and everyone who put a like on that comment, as that entitled attitude tends to go hand-in-hand with aggressive behaviour and disregard for the rules of the road.

“You get bike lanes, shut up!” Study after study has shown that successful cities have multi-modal transportation that includes transit and cycling infrastructure. That’s fact, not opinion. People in those cities are healthier and happier.

I spotted this jerk a few months back. Sorry for the image quality but I am sure you can make out his “I own the road” sticker. Feel free to give him a one finger salute should you spot him. 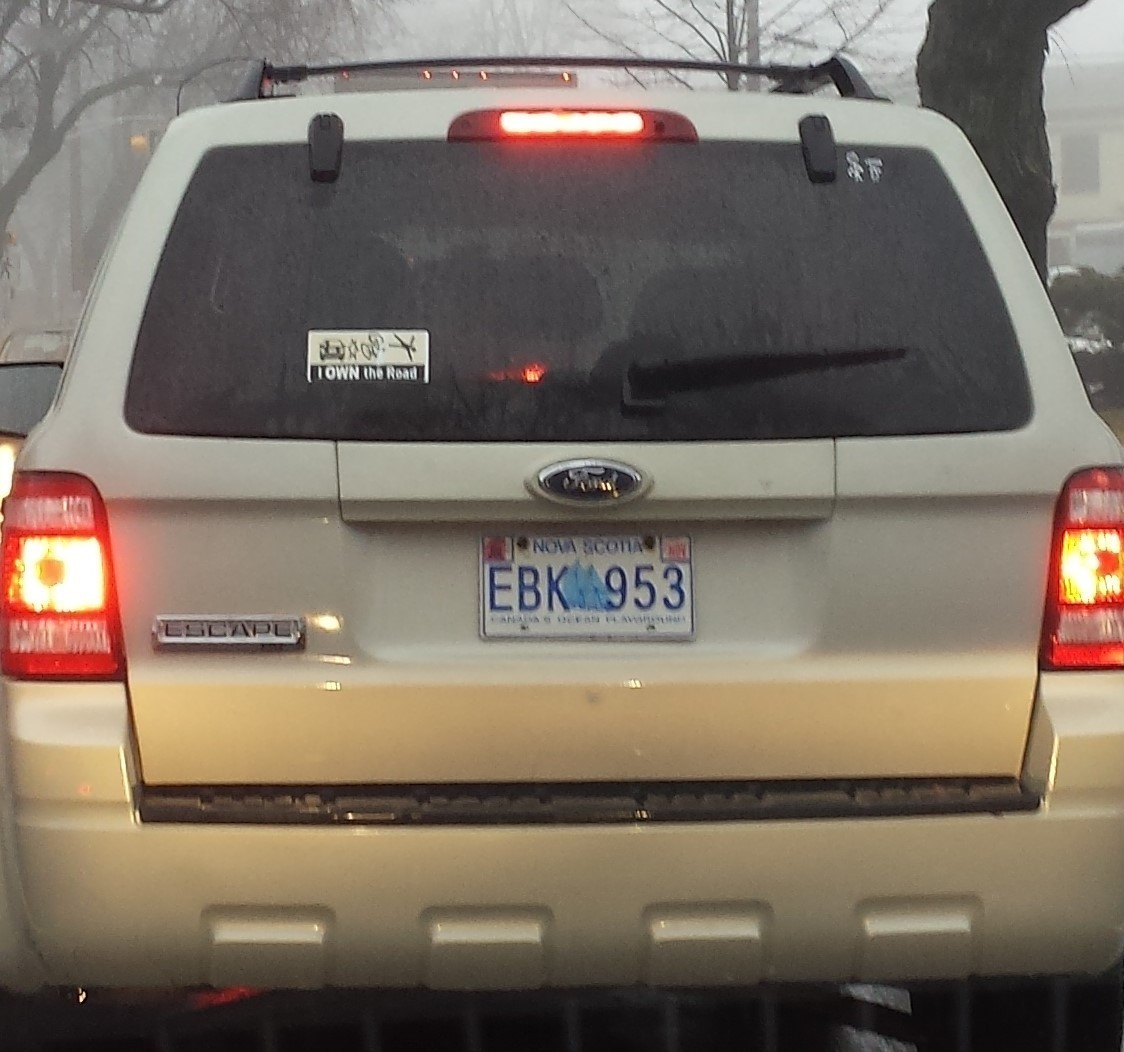 I would advise against needlessly antagonizing any motorist on the road.

I should clarify that I didn’t mean to encourage engaging this fellow, especially while on a bike. I wouldnt be surprised if they mimic the action on the sticker. I just think he’s a complete a**hole, and I think that sticker is highly offensive, trying to incite violence against bikers. If a man with the last name Grabher isnt allowed to have his vanity plate displayed, how is this allowed?

I hate this crap… I have been getting more agitated with most drivers out there ever since I got my motorcycle. Although some of the problems are different the general respect from other drivers is a common problem for both bikes… Just yesterday I had a driver try to pass me on the right when I was on my motorcycle WHEN I WAS IN THE RIGHT LANE!!

I don’t think the hashtag author rides a bike.