The Fight Trail trail system is a popular trail system in Spryfield (out side of Halifax) that is receiving major improvements thanks to the great folks at MRWA. There is now two entrances to the trail system, with a third one planned.

Heads up there is a hornets nest under one of the two short skinny bridges on the Attic where it connects to Lou’s.

Also the hawk living on top of the pole at the end of Alabaster Way was being especially protective today. Circled closely over me several times squawking.

As if fight needed more peril

"Just a heads up…

I came across a guy (late 20’s/ 30’s) and his dog in the Attic earlier today. As I approached he stated “sorry he can be an asshole” but made no effort to leash the dog or grab his collar.
I smiled and said, “not a problem” assuming he meant his dog would bark, be excitable and maybe even jump up. Instead his dog latched onto my outer thigh and bit me!
I pulled him off with one arm while still riding and then rode away while his dog continued to try to get at me again.

Not a bad bite, seemed to be more of a ‘herding’ bite than an fullbore attack but still enough to break the skin and draw some blood…"

Heads up there is a hornets nest under one of the two short skinny bridges on the Attic where it connects to Lou’s.

hmmmm…I know where one of these bridges is but can’t picture where you are talking about for a second bridge. The one I am thinking of is hard right,just after a quick smooth rock up. It is wooden and somewhat narrow. There is a rock to aid you in getting on. (hahahaha that is the best I can describe it)

Where is the second bridge? Is there another entrance to the Attic?

I rode the Attic clockwise and there are a few ways out. The way I went takes a hard left onto the first bridge and then straight onto the second bridge and a hard right after it. The two bridges are only a few feet long and are laid one right after the other. A tricky spot at the best of times, without a swarm of angry hornets chasing you. 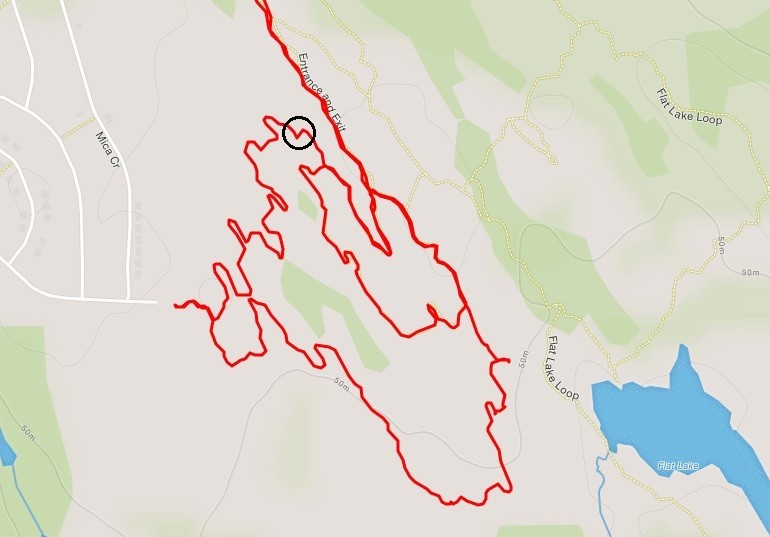 I gotcha now. I was thinking of the other end of the Attic

Trail upgrade courtesy of MRWA build day today. What was a rock drop with a mudhole at the bottom is a nice rock ramp with a layer of dirt over it. I haven’t asked permission to post photos of the people, so I’ve cut them off. Hopefully, they don’t mind their legs showing. I don’t think the dog will mind having his backside displayed. 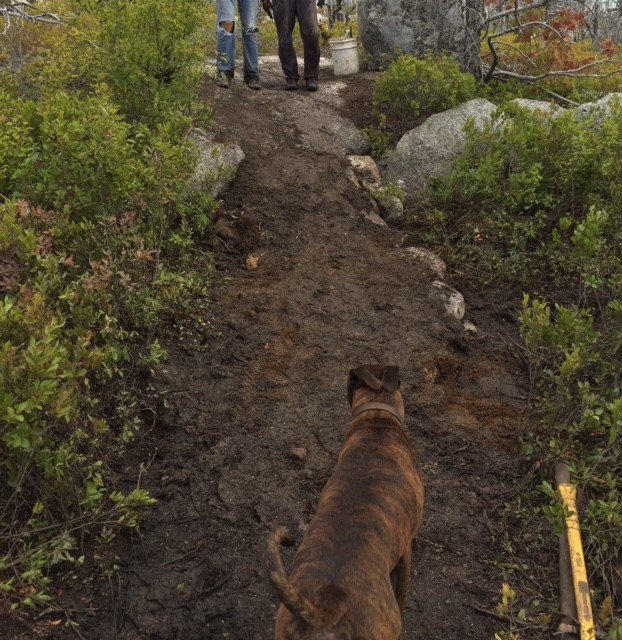 The ‘Fight Trail’ area was renamed on Trail Forks to McIntosh Run, and extends to Norawarren. The Fight name is an important part of HFX riding, with a long history, so this change wasn’t undertaken lightly. The reasons for renaming included a) With MRWA using TF as the official map tool, and on-trail signage and landuse agreements with landowners etc… all calling the trail system the “McIntosh Run Singletrack”, a renaming in TF was needed. b) The trail system will reach well beyond the geography of the original Fight, especially once the connection between Flat Lake and Norawarren is built. c) with a new population of users out there, I think quite a few people don’t know the ‘Fight’ name anyway.

The renaming on Trailforks has no practical implications that I can find. And if you type ‘Fight’ into Trailfork’s search box, McIntosh Run comes up. I personally still call the area ‘Fight’ in conversation, and expect that will continue for many MTBers.

Pretty much saw this coming a mile away. Not a fan personally.

Not a fan of the trail or just the name change?

Love the trail, not a fan of the name change.

I prefer the old name, but now we can joke about making the McIntosh Run in under 12 parsecs.

I was thinking the area is McIntosh Run and it contains Fight Trail section and Norrawarren. Although, I don’t think thats what Lawrence means.

They need to match signage, I’m guessing. Also, you are allowed to talk about it now. Which makes it easier to promote

Would doing the McIntosh Run in under 12 parsecs get a Strava KoM? Did Han Solo get KoM for the Kessel run?

Choking down a “well actually on this one”. Hard swallow.

This is how I die. A gap at fight trail. Technical riding and jumps.

That’s exciting! There’s far too few gaps in this province