I guess I don’t really expect them to stock a bunch of Intense bikes… the comment was more borne of my annoyance with the amount of ‘small stuff’- parts, helmets shoes, etc. that they don’t stock in Halifax but feature on their website.
Will have to drop in and check out the Intense stuff they have though.

@riderx it’s all good, fancy bikes are exciting. Although I am inclined to think Intense are riding on their name from the past more than quality now.

In the interest of being non partisan I would prefer to see shops promote their own stuff and in the vendors section. Like you and @rossw have been doing.

This topic has been moved as per your suggestion.

My next bike will most likely be a YT purchased online.
I wish I could support the local shops more, but shop prices (on new complete MTB’s) are whack unless you get a bro-deal.

Are YT shipping to Canadians from within the country? If not, you’ll get dinged a fairly significant tariff for importing a full bike into the country. I think it’s like 13% for fully built bikes and wheels? There’s no extra duties for any other bike parts though.

I know Commencal is shipping their bikes from within the country. I thought about going that route when I bought my latest bike.

Edit:
Ahhh. I see on their site it says next to the CAD prices of each bike “includes import tax & duty”.

If they ship the bike group separately (and most companies do to pay lower fees) it will be like 5% or something. I can’t remember exactly what it is. Niner ships their bikes like that to us from the states.

Duty on Frames is 5%, I can’t remember if they calculate that after HST is applied or not.

I’m pretty sure they have a Canadian distribution network that is separate from the USA. So like the website says, import tax and duties are included in the price.

If you look at the entry level Jeffsy, comes with a Pike & monarch suspension/DT swiss wheels/reverb dropper/2x11 GX/ Guide R brakes and race face components. All for $3200 CAD msrp. That’s an incredible value for the money in my opinion, and you will be very hard pressed to find similarly spec’d for under $4k at the LBS.

Yeah, Ross posted up to that effect. I had no idea or forgot.

There was a ton of Intense bikes at the Enduro race in Scotsburn last fall. I think every one of the racers that came from St.John’s were on them as well.

Was at mec thought of sharing this sweet ass spider

was hoping to check the recluse but wasn’t there. 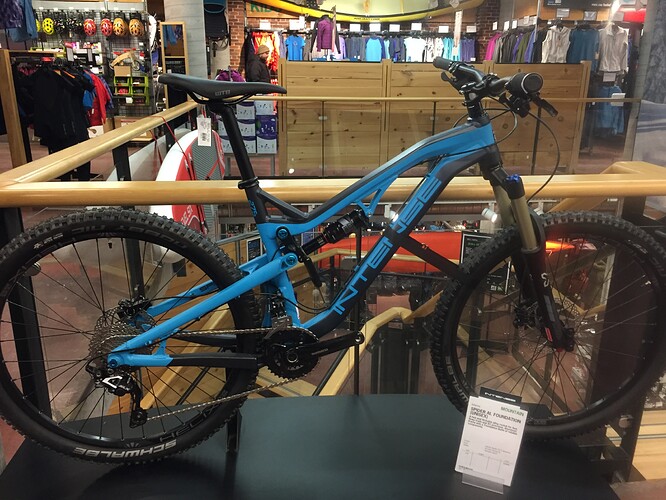