Enduro, all-mountain or XC? There’s an Intense bike for that. We locked MEC bike buyers and bike tech nerds in a room to develop this comprehensive guide. 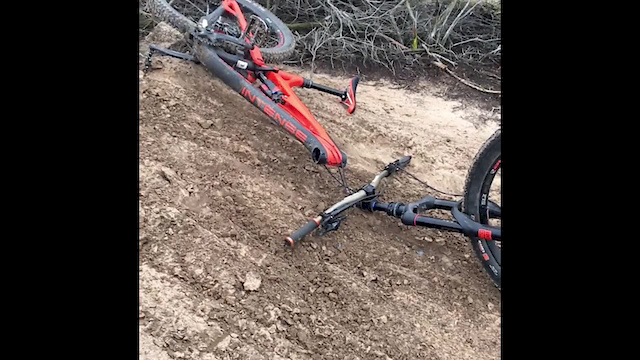 fail of the month Video - Pinkbike

fail of the month, maybe year?

Thank you for this. I’ve never actually seen a mountain bike break before. Pretty cool.

Wow, that’s intense for an expensive bike like that.

I don’t know if I can agree conclusively… but it certainly doesn’t fail in half measures. The word catastrophic comes to mind…

Aluminum may not have failed as dramatically, but the way he landed, the frame and/or fork still would have been pretty f**cked up.

@tossedsalad I am assuming there would be warranty coverage for this…

I was just riding along and…

According to the comments with the video he apparently did get a warranty replacement, which is shocking, that landing was nasty.

Warranty is pretty much a case by case basis. With only a video I wouldn’t want to speculate.

Just wondering why ECMTB is promoting MEC and Intense so much? Its on the Facebook too.

I think it is excitement over the new brand in town.

But if Intense wants to spread some cash around… lol.

They are damn expensive though.

I think the problem is more that when you paste a link the post takes on the title of the page it is linked to. In this case it is making it look like ECMTB is saying “what you need to know”. When really the post should read something like “Hey, MEC is carrying Intense brand now.”

I posted it for the following reasons.

It’s a new brand/distributor of a brand in town. It’s exciting to see a major brand such as Intense represented on such a scale in our area.

ECMTB.net has never been brand or shop specific as a whole. Ride what you like, from where you choose to purchase it, as long as you ride!

We have worked with local shops in the past for specific events and will continue to do so when appropriate.

If any local shops that have a location on the East Coast/Atlantic Canada would like to help sponsor the site, or specific events, we have an open mind as to what that may look like, feel free to contact us.

Intense is getting a lot of face time now because MEC/Intense has deep enough pockets to promote the brand. Intense has always been available here in Halifax. We @ Idealbikes could get an Intense bike in at one time. The demand for the brand was low so in turn it was not commonly repped on sales floors. Outta sight outta mind.

The question is, will MEC here in Halifax actually have any? Or will it be like so much of the bike stuff on their website which is ‘not stocked’ at the Halifax location?

If there is sustainable demand you will see it here.

@gtrguy MEC Halifax does have a couple of models on the floor. But obviously the stores out west will have a larger selection. Like everything at MEC though, they can be shipped to the store for free.

Did that sound like I was promoting MEC? My apologies