I see that OneUp now has a threadless carrier that replaces your star nut in the steer tube, rather than threading it which seems more appealing to me.

Has anyone used the EDC tool before? Pros/cons? Does the multi-tool eventually get rusty and seize up? My multi-tool lives in my Osprey pack and the allen keys are usually stuck stowed when I go to use it. I bought a new one last year, now the new one is the same way. A Threadless, no tap install option that lets you store the EDC V2 Tool  inside your stem/steerer tube without threading your steerer tube. EDC Tool sold separately. The Threadless Carrier replaces your star nut and lets you preload...

I’ve been running an EDC tool for a while and have the original version. The newest version and then today’s update has a much nicer tool system and the chain breaker actually works. I don’t use it often, but it is nice to have when it is needed. I ride packless so I have the EDC tool with a bacon strip plug on the end and then I have the EDC pump with a CO2 in that storage compartment. The new threadless install kit is interesting. The quality of the tool is top notch and I have had no issues with the tool rusting or anything. It lives in my steertube 24/7/365 and has been in there for a few seasons now.

I actually just ordered someone an EDC tool only for someone who bought a bike that came prep’d for a tool. I also ordered a second tool and this new threadless install kit to stock through Granite Suspension along with a 100c pump. The steertube threading isn’t a big deal and apparently doesn’t void warranties and uses less parts, but I also have the tool already.

I’ve been running the original EDC for a few years now. Hasn’t rusted up or seized at all.

I have used it a lot on the trails, from allen keys, to tire lever and chain breaker.

I’ve got a 100cc EDC pump that I carry the tool inside of. You can also get some handy quick link pliers that you can stash inside with some spare bacon strips. I like the pump option because it gives me a backup to the one CO2 cartridge that I carry.

A water bottle, pump/tool combo and one 25g CO2 cartridge is all I carry for 99% of my rides. 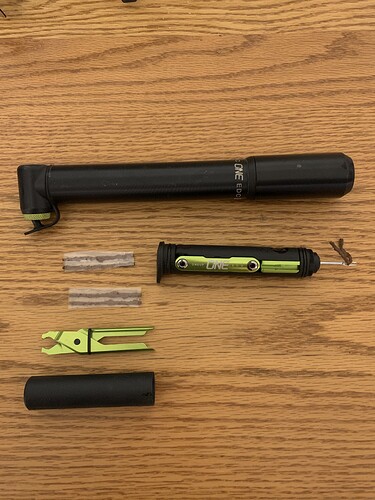 That’s great feedback to hear. Tired of my multi-tool being seized closed when I need it.

Going to do some more researching, but I have a feeling I’ll be hitting you up for an EDC setup and some WPL fork boost when it comes in.

I also have the EDC tool in my steerer tube, I’ve tightened nuts and spokes, plugged tires, and even ended up using the pliers once. It’s fun being the on-trail hero when folks have mechanicals.

I’m honestly tempted to get the thread less carrier and replace the EDC Stem with something sleeker and more colourful.

I bought the tool and have it in the EDC pump so I can swap it to my gravel bike in a few seconds.

I have mine in the Steer tube, but future bikes it will just be going into my pump.

Great tool, never ride without it.

Few things I have seen go wrong, the pumps O rings get displaced and cause failure. Can be fixed easily.

The EDC is pretty nimble and will twist with very small amount of torque.

That being said, would 100% recommend one up to anyone.