Specialized FSR XC - What's it worth?

A coworker of mine is looking to sell his bike. He believes it is a 2002, although from google searching it appears it may be a 1999. It is a XL frame. 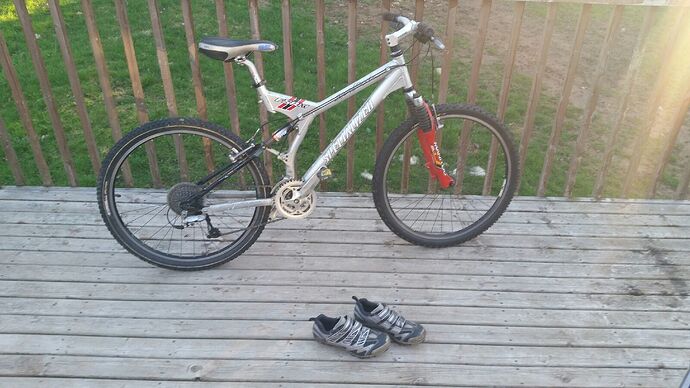 It’s always worth checking www.bicyclebluebook.com it what we use to start with pricing. Usually it’s pretty accurate, even assuming parity beteewn USD and CAD.

on kijiji that would be posted as exotic vintage with a rare colour scheme for $1500! I’d probably ask for $300 and let it go for anything as long it they took it away.

@bent6543 I didn’t realize there was a blue book for bikes! I’ll check that out.

@landandwater I’m not sure what he was expecting it to be worth, but when I told him what I thought he quickly said that it cost $2800 new.

A lot sure has changed with bikes in 15+ years

Yeah, that’s the problem. As soon as 29 and 27.5 inch wheels came out, and disc brakes starting showing up on everything, the value of these older rigs just went down more and more. I have the same Issue with two mountain bikes I have. My 2007 Trance 0 is maybe worth $500-600.

I see this a lot, it’s hard for bike owners to take sometimes. It’s just so old and outdated that it’s not worth much, regardless of what the paid for it originally… An FSR XC from 2005, 06 aren’t valued at $300 in pristine shape. There’s nothing special about it to bring the value up on this one, pretty generic stuff add in forks, shock and pivots that haven’t been serviced in how long? V brakes instead of disc. Have the hubs ever been repacked? rims worn out from brake pads?

I think your assessment is fair but I’d play kijiji roulette with it like @landandwater suggeted.

I’d take those time pedals off his hands for $20, I’ll even throw in a pair of flats to put on the bike in exchange.

I’d take those time pedals off his hands for $20, I’ll even throw in a pair of flats to put on the bike in exchange.

I’ll mention that to him and see what he says

If it helps, my 2006 Specialized Stumpjumper FSR Expert retailed for ~$3400 new. I sold it a couple of months ago for $450 with fairly new tires on it, cleaned, in good working order, equipped with cheap shop test-ride pedals on it.