A large tree was purposely felled across the bottom of Six Pack and is blocking the trail. Likely need a chainsaw to clear. I suspect this was done by The Hunter who leaves these signs behind. 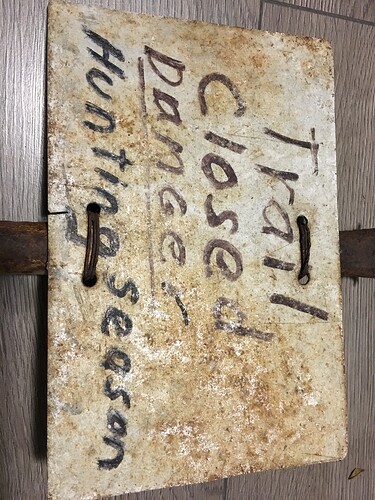 I rode past the sign on my way in, by the rock wall on Ribbon of Love. When I found the felled tree, I got angry and rode back to Ribbon and pulled the sign out. Does the collective “we” know who owns this parcel of private land? It’s illegal to hunt on private land, so unless it’s the landowner doing this then there may be legal recourse against The Hunter, assuming that it was him. But then, is there legal recourse against mountain bikers, hikers, dog walkers, trail runners, etc. for using these trails?

I find it arrogant that someone will attempt to close trails and bully trail users in order to hunt within city limits. I’m angry, and I’m hoping to get something done about it. More to come.

DNR was contacted when these signs first went up, don’t know what the outcome was.

A big chunk is owned by Brightwood, and another private owner(s) the other chunk is Watershed Protected area. It’s not illegal to hunt on private land unless it’s posted… Here’s everything you need to know about Trespassing: https://nslegislature.ca/sites/default/files/legc/statutes/protect.htm

Almost guaranteed, it’s the guy who lives in one of the last houses on the left on the way to the trailhead. He’s also the one who places tacks on the trails. He’s threatened me and several other riders with shotguns and promised to kill our dogs a number of years ago. The RCMP (as usual), were completely useless when contacted after this.

I suspect you’ll get nowhere.

He’s threatened me and several other riders with shotguns and promised to kill our dogs a number of years ago.

Uttering threats and unlawful use of a firearm, and still the RCMP did nothing? Wow. Guess I’m not going to Spider Lake without my GoPro anymore, let’s see how he fares when he’s caught pulling those stunts on camera.

I came across that tree a few weeks ago, but didn’t realize it had been cut down. I’m not sure what the motivation would be as I don’t recall it being overly difficult to get around it. At least it’s in a location that is visible early enough to provide plenty of time to stop.

Yes, thankfully it’s not around a blind corner. If you take a closer look it was clearly cut with a chainsaw, there’s no cracking in the trunk so it wasn’t a blowdown. I’m willing to assume it’s the same guy who’s caused trouble in the past (and is referenced in the above posts). He’s strewn big rocks across sections of Skull in the past and pulled logs and crap over the trail too. All usually during hunting season.

I’ve got a chain saw…

If the RCMP or DNR got more complaints maybe they would act on it. Unfortunately, I think he’s allowed to hunt there as long as it’s a certain distance from a building I think, private or not. I’m sure @tossedsalad could say for sure. Putting up a sign is no more legal or illegal than mountain bikers building trails. I’m not against most forms of hunting, but hell, get out of the city at least.

He’d need to be 402m from a dwelling to hunt, 804m from a school. He’s probably thinking that noisy trail user are going to jeopardize his chances of nabbing a deer. These guys are intrenched in tradition when it come to their hunting spot…you know “not moving, my grandfather hunted here, my father hunted here”…surprising about the RCMP though.

I was in late last night and seen the tree, It was for sure cut/fallen to attempt to block the trail by a chainsaw. I also know it won’t be there much longer…

Ha what a nutjob. 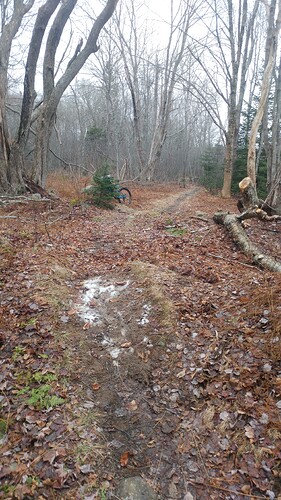 No thanks to me. It was the trail elves, pretty sure I seen them scurrying away as i rolled up.