Definitely a good deal… sadly I have to many bikes and like @Nova a better half that would have my head if I let another one in without some of the current ones getting cleared out first. I really gotta get to work on that…eventually…

Half the reason I’m selling this is that I just got my wife a new hardtail that fits and suits her better.

I had an unsuccessful attempt at getting Anitra into biking with a hardtail I built. The geometry was all wrong though. Too much fork gave it a high bottom bracket and made her nervous.

Later, I finally bought her a proper one and she’s loving it.

Hey Jeff, was that hardtail you built up with the Fox fork I sold you? I have some of the Fox spacers at home if you wanted to sort out the geometry by bringing the travel down. Only takes a few minutes to install them. I think that was a 140mm if I recall?

It would be great if you could help me with that. I’m giving the bike to my brother and 140mm is too much for him too.

No problem, I’ll see what I have for spacers. What’s the right travel for the frame?

It’s what I had for a frame… a shame though because I set it up with a nice fox float fork I bought from you and new 1x10 drive train and hydro brakes.

A sweet hard tail frame would have made it a great ride. I think my brother will be fine with it knocked down to 120mm though. 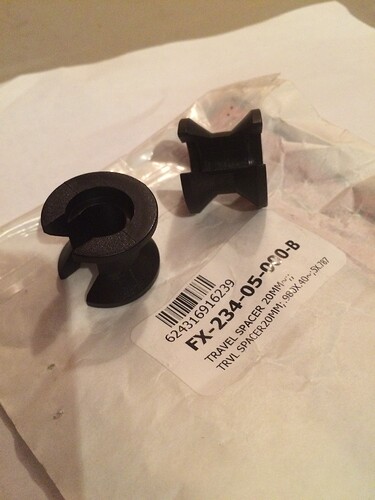 If I recall that fork is at 140mm right now, one spacer will reduce it to 120mm.

Later, I finally bought her a proper one and she’s loving it.