Fyi… chain reaction was cheaper than bike-discount when I checked last week so check them too.

It looks like that set of studded tires is already gone, but I’ll have to keep my eyes peeled on the buy/sell groups. I also might have had some luck on Pink bike.

I’ll have to compare Chain Reaction, Bike-Discount, and any other website to see if I can get a set without spending almost 200 bucks.

a lot of guys on here have made a set. Much less expensive. I made a pair of 26" using wood screws. Like velcro on ice

The most cost effective option is to make a set yourself. My first studded tires were a DIY project. It’s time consuming but pretty easy to do. All-in I think it cost me under $80 which included 2 brand new Kenda tires.

Whether you build them yourself or buy them off the shelf you won’t regret it. The ability to ride in all conditions and extend your riding season is definitely worth the cost.

I am actually looking for any used/unused but not abused diy 26 x 2.0 + studded offroad mtb tires. pm me the prices and sizes. pictures would always be appreciated. cheers

I have a brand new tire that was started to be studded. I had completely forgot about it until I went to grab my studded tires last night.

Does someone have a reliable recipe for DIY studs? Might be an interesting project to take on.

I only skimmed the video, but looks to be essentially what I did for the two sets that I have made with a couple exceptions;
-I drilled a small hole with a drill from the outside-in, rather than force something sharp thru.

-To speed things up, I carefully used my battery powered impact to drive the screws in rather than a screw driver.

-I used an old road tire with the beads cut off to line my current set of tires. Simply using an old tube as a liner seems interesting. I’d be a little concerned it wouldn’t be tough enough though.

-I used an old road tire with the beads cut off to line my current set of tires. Simply using an old tube as a liner seems interesting. I’d be a little concerned it wouldn’t be tough enough though.

I use a strip of old seatbelt for a liner. Tough as hell

That’s essentially what I did with the first set I made. I didn’t have a seat belt to use, but I had strips of fairly thick canvas. It didn’t make for a light setup, but I never flatted!

Thanks @Jetter and @muddy for the offers but i decided to go with the masters @JeffV and “the legend” @darkmyth compelling perspective of experiences to go for the real studded set of tires.

I have a set of 26" rims I was going to list for sale, if you’re looking for a second set to mount your studs on. Just haven’t got the pics and stuff together yet.

If you need a seatbelt, but don’t have access to an old car, may I suggest cutting the belts out of the car of someone you dislike?

lock the beers and pepperoni too pape

If you need a seatbelt, but don’t have access to an old car, may I suggest cutting the belts out of the car of someone you dislike?

Fun fact: I cut mine out of an abandoned Pontiac Grand Prix at Spider Lake.

Here is couple of pics of the ones I made 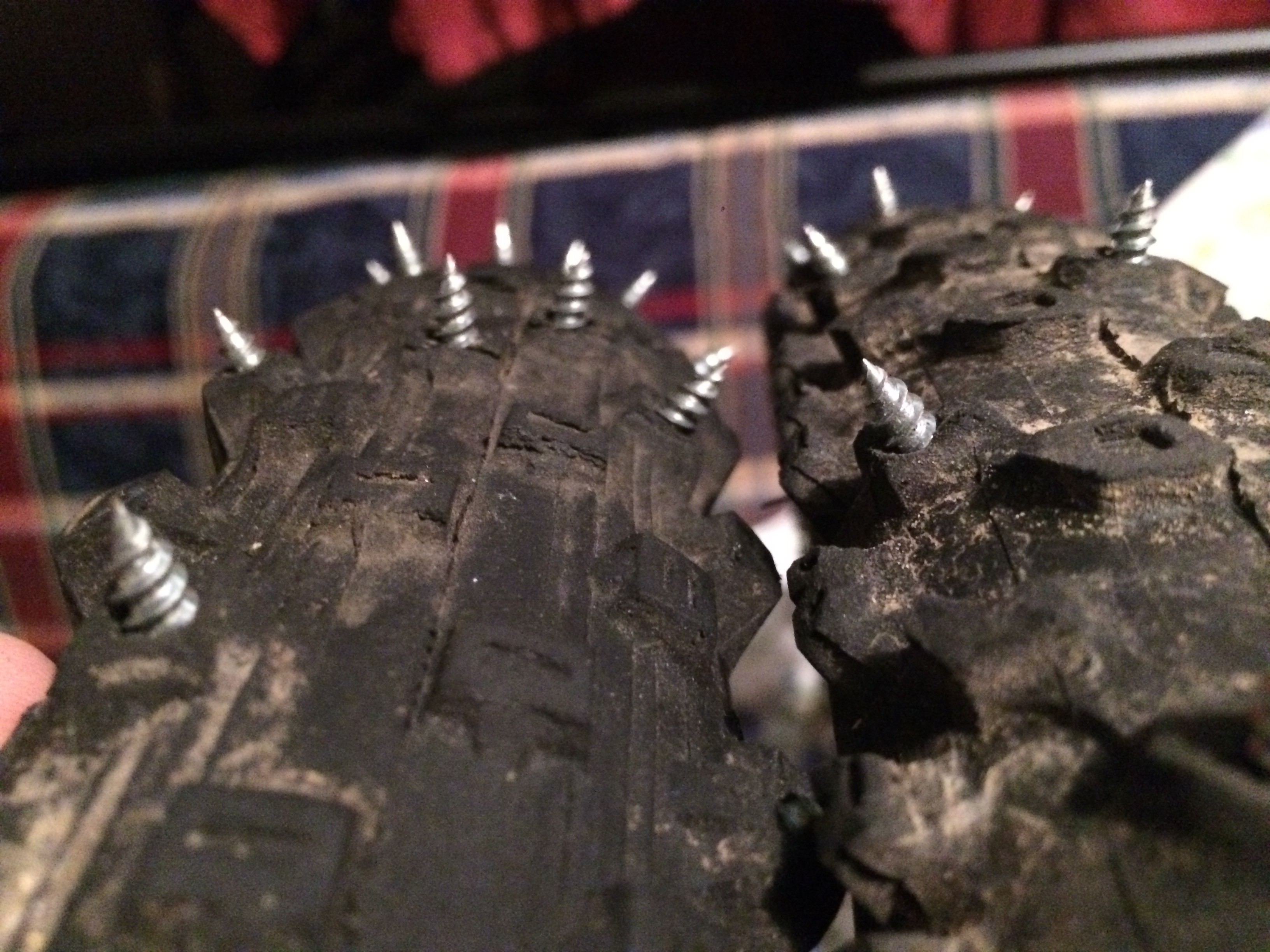 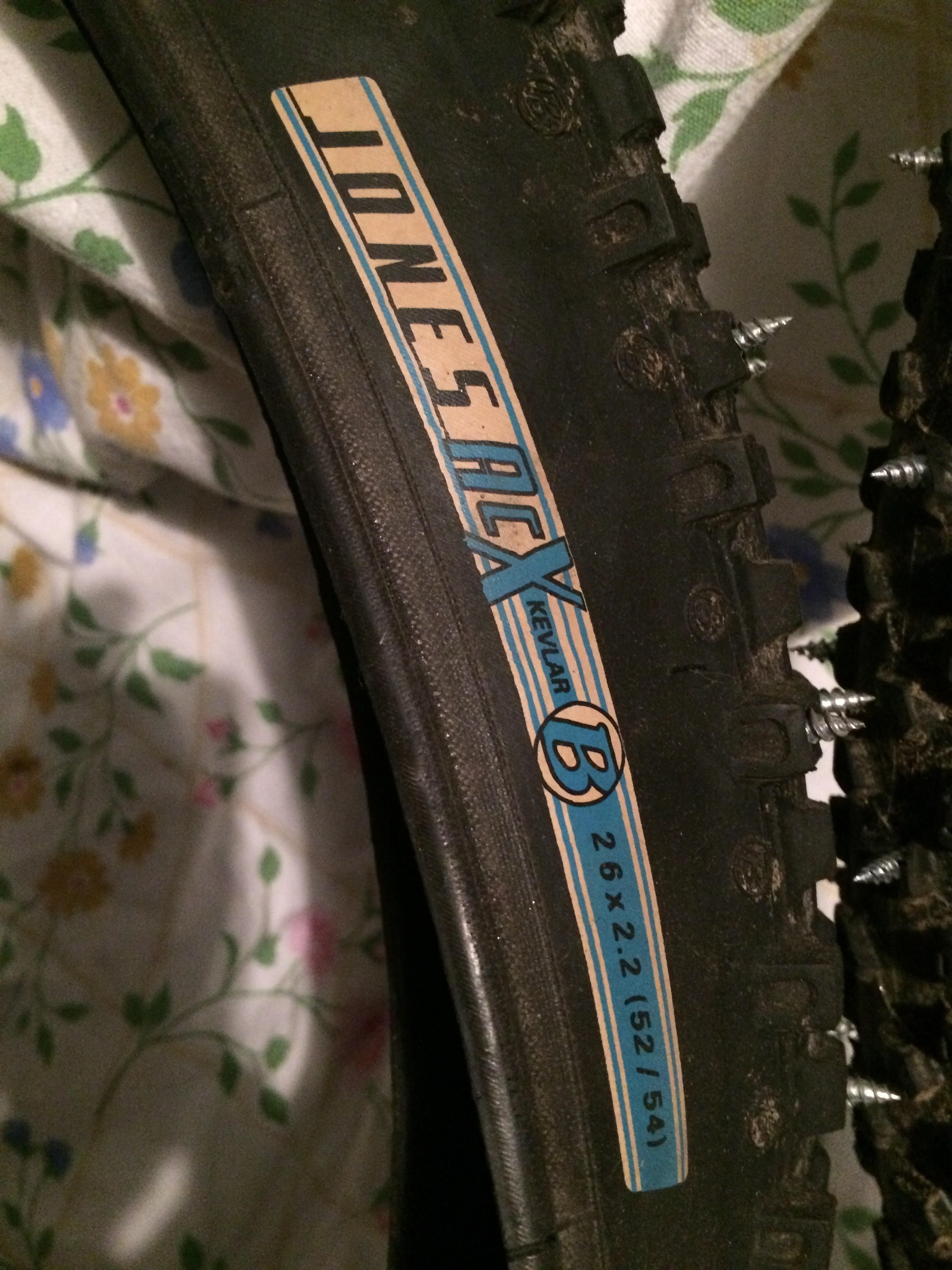 Not sure what size anyone’s looking for, but I saw this on kijiji

From the Wayback Machine. I think I mention using a seatbelt in later versions.