Tired of Paying Tax on Your Chain Reaction Purchases?

I’m sure many of us that have purchased bike components and such online and have been hit by the duty/tax fairy when the parcel crosses the border into Canada. It’s a bit ridiculous that the current personal exemption for importing goods into Canada by post is only $20. The $20 value below which no tax or duty is applied is called the “de minimis” and happens to be the lowest in the western world and is much less than the $800 exemption Americans enjoy on goods imported into the States. If you’d like to see the de minimis value raised there’s an online petition to the Federal Gov’t pushing to raise it to $200.

Take a minute to read a recent article published by the CBC: 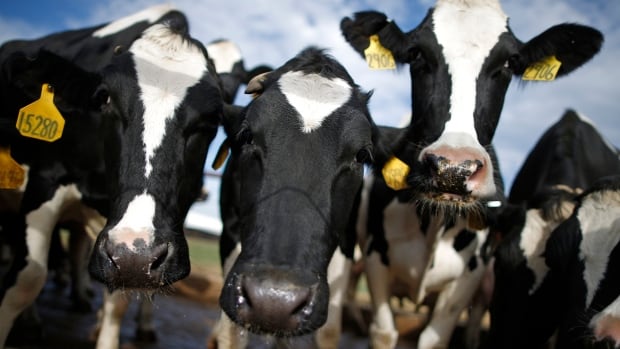 In the hot lobbying firefight going on at the moment over the government’s systematic stifling of international online shopping by Canadians, one important voice is absent: consumers. This is not terribly unusual. Farmers seldom ask the cow for...

Can we also drop health care and pensions? The savings by not providing free operations to unhealthy people would mean I can buy more stuff.

Can we also drop health care and pensions? The savings by not providing free operations to unhealthy people would mean I can buy more stuff.

Sounds good. Any links for the petitions?

Most of the time the parcels from CRC skate through Canada Post without having taxes applied. That’s been my experience anyway.

I’ve been losing the customs lottery more often than winning lately. Canada Post doesn’t check all parcels, but if you’ve ever shipped over the boarder with a courier you’ll know how ludicrous the brokerage charges are (and they don’t let any by). Raising the exemption will open up some shipping options other than Canada Post.

Couriers suck for parcels and even if they aren’t collecting taxes because even you’re below the new mark for taxation, you can bet they’ll still be tacking on their brokerage and handling charges. I avoid DHL, UPS and FedEx like the plague.

Brokerage is generally included with air services from couriers. It’s the ground services where you expect to save money that you get surprised. Homework is definitely needed.

I’ve always found that ordering from CRC to be a gamble if delivered by Canada Post, sometimes I get dinged, sometimes I don’t. My most recent order was done from my phone and the only option for free shipping was by post. You can imagine my surprise when DHL showed up at the door. These guys are the worst for fees and duty. I emailed my displeasure to CRC and they responded that they had bumped my order up to a better service. It surely cost me in the end. Sad part is that after all the taxes, duties and handling/ brokerage fees,the item I ordered was still $20 cheaper than if I bought it here.

I ordered a $330 fork off CRC last year. I got hit with $66 in fees from DHL. I requested a breakdown from DHL because in Canada there aren’t supposed to be able extra tariffs for all bicycle parts except for fully built wheels and fully built bikes being imported into the country.

The document DHL sends you breaks everything down really well. What I didn’t realize is CRC does not deal with calculating our provincial sales tax. They offload that to the shipping company that your order is being placed with. In my invoice with CRC there was no sales tax applied. Just the $330 sale price of the fork. DHL’s $66 fee is the sales tax (calculated for my province) + $17 in processing fees (flat rate. It doesn’t matter if i ordered $5 in parts or $500. it’s always this amount).

You can’t expect to not pay for sales tax. If you were buying locally you’d have to pay for sales tax as well. The $17 fee just for handling the sales tax calculation and processing is a bit ridiculous. But hey at least it’s a flat rate.

In case anyone is curious here’s what the DHL document looks like: 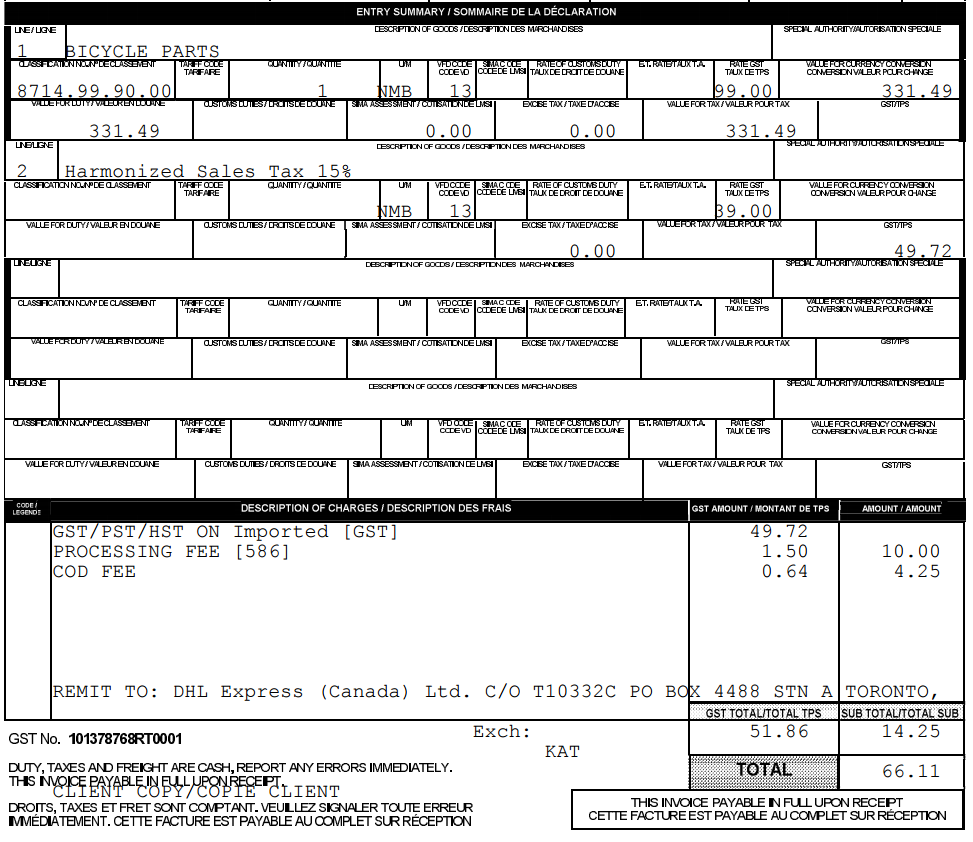 I had to call DHL and request that document be sent to me. But they were happy to do so.

I can’t comment about Canada Post from CRC because all of my orders have been with DHL so far. But I’ve read that Canada Post can sometimes slip up and forget to charge you sales tax.

You’ve got it right, they do charge taxes on the shipment - provided the total value of goods exceeds $20 CAD. On small value shipments, like $50 or $100, the costs of brokerage fees on top of the taxes can be excessive and make significantly increase what you end up paying (Canada Post charges a flat $9 rate to asses taxes/duties). The petition is to increase the value below which taxes and duties aren’t assessed to $200. It actually costs customs more to spend the time assessing and collecting the taxes on the small value packages than they collect back. It makes a lot of sense to increase the de minimise.

Ahh ok I understand. Yeah I usually try to make bulk orders for things or combine my order with a friend’s to make it more worth while.