Too many options are bad, change my mind

Seeing as how we are coming into some bad weather I figured this is a good opportunity to butt hurt a few egos. J/k.

Anyway, the gravel grinder thread has a lot of different subjects combined in it so I thought I would take one of them and put it here.

When I first started mountain biking the Kona catalogue had 8 bikes (six mountain bikes and two hybrids) I had earlier catalogues with even less bikes but this is the one I best remember. Now Kona has about a zillion models covering who knows how many platforms. Would you be willing to garbage all of your current bikes and pick one of those six bikes (top two had rockshacks) Why or why not?

Every year it feels like companies come up with a new genre or sub category. I always laugh and make fun, but after riding those specialty bikes I get it. I’ve got a mtn bike, road, fat, and recently a gravel. Love em all! And all for what they were designed for.
Can’t say I would get rid of any. I still think for the consumer the still need to purchase according to what they will be predominantly riding (80/20 rule). I love all the various riding I do, and I can say with out a doubt, it’s better with the bike specific to that market.

There may come a day and I don’t have the ability to ride all these bikes, can I make that choice now? Not really. Guess it’s up to what I am able to do at that time, and what I am mostly doing at that time.

Ok, for the sake of fun, I’ll bite. What year kona catalogue are you referring to? I remember seriously lusting after some old explosifs, and that orange jake the snake with the green Michelin tires was the shiznit.
My nostalgia glasses are definitely rose coloured😜 some of my best mtb memories are on a fully rigid low end norco hand me down bike with a bent cantilever brake boss and biopace chainrings. Trailside mechanicals were a good excuse to take a break and enjoy the surroundings. I rode all over British Colombia on a fully rigid single speed and had a blast-even managed to keep up occasionally on some group rides(although I suspect I may have been kept around for cougar bait). That same bike saved the day at 8hours of Gore when my teammates brand new blinged out FS shit the bed on lap two. A few days ago I did alternating laps at Brunello with my coaster braked klunker and my Modern FS bike and had a blast in totally different ways.
However, my tongue is somewhat in my cheek and I’m a total hypocrite. I love my full suspension and the modern geo and dropper post has def changed my riding for the better. I can ride things now that I never could before.
My daydreaming mind regularly swings back and forth between a dirt simple apocalypse ready forever bike and the latest and greatest wunderbike.
http://drunkcyclist.com/2015/05/06/best-bike-world/

The catalogue was somewhere between 1992 and 1994. I think bikes changed because people kept pushing the boundaries of what a rideable trail was. Even between 1982 and 1992 the differences can be seen. Heck, tomac raced with drop bars.

Maybe doesn’t go back quite far enough, but this is a fun site to look at.
http://www.classickona.com
My retrospectoscope is obviously flawed, as the objects I remember from 20years ago are associated with being younger, having more hair and less responsibility,etc.
I’m not saying I want to go back to being a teenager, nor would I want to go back to riding an old creaky rigid 10speed exclusively. I do however get frustrated with things in my life that are two years old and are ready for the garbage heap because you can’t easily repair or replace parts, whereas the 10-15 yr old stuff seems fine.
MTB evolution is great, but If you’ll allow me to put my tinfoil conspiracy hat on, I believe planned obsolescence is absolutely happening-be it bikes, cars, phones etc.
This article is more coherent than I could make it. 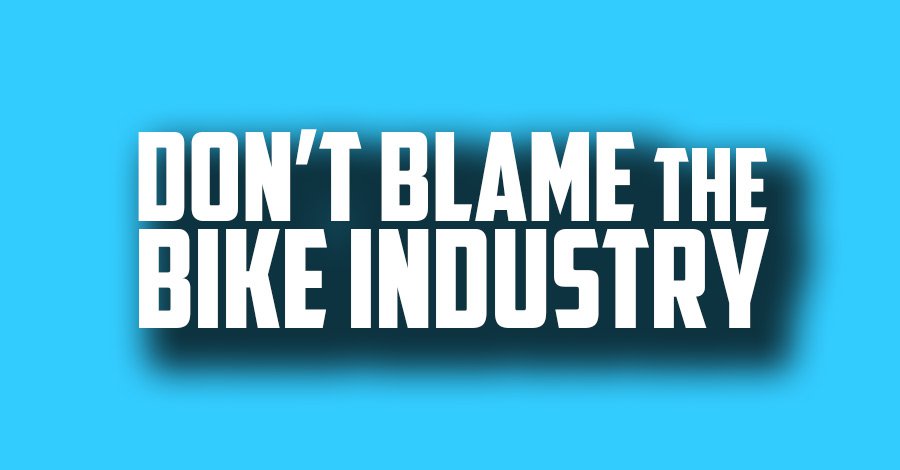 "Isn’t’ the bike industry becoming a bit like Apple in all the wrong ways? Changing things just so they are different..."

Now that is a term I have not heard in a while, probably since Zapata Espinoza left Mountain Bike Action for Buycycling Magazine. We thought upgrades rendering already owned components useless was out of hand back then, we had no idea what was coming.

Get them new boostdubplusmicrosplinexdr hubs dog

Soooo much choice in '88! Later on there was a combined Brodie/Kona catalog. 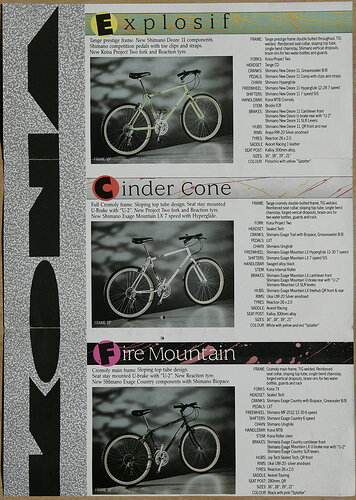