Preferably looking for something with a 15mm axle and must have a straight 1 1/8" steerer (at least 6.5" long). Travel between 100 and 120mm or something longer that I can lower. If you’ve got something else let me know, I don’t mind looking at something with a 20mm axle. Prefer air or coil/air combo.

Bumping this again… some trade bait for the right fork if anyone is interested. Have a Fox Factory series 32 Talas RLC FIT 150mm/120mm, Kashima, tapered steertube (about 7.5"). It’s in good shape but has been ridden, Talas works great, super adjustable. It’s a 2012 fork if I recall correctly.

Also happy to keep the Talas and simply pay cash.

Still looking… Seems these are getting rare as hens teeth.

I wonder if there is one on the 2006 Stumpjumper FSR that I’m selling… seems an expensive way to go to get a fork, but better than a kick in the head? If you’re interested in taking the fork and selling off the rest of the parts, I’ll measure it when I get home.

@IanM_MTB I appreciate the thought but I really need a 15mm axle version not a QR. Thanks tho!

If it’s not QR the Marzocchi is likely a 20mm axle but that might be a possibility… or maybe I’m lucky and it’s a 15mm axle like the 2012 Marzocchi 4X… that would be sweet!

looks like youve got a match here! ron has it on kijiji ads! 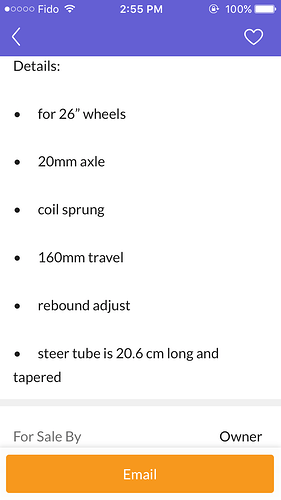 No dice, that one is tapered, I need a straight steer tube for this project. Thanks tho!

I’ve got a X Fusion Velvet RL I could swap with you. Set at 130mm right now, adjustable travel internally via a pin ladder system, fork works great. 15mm axle. rebound and lock out. non tapered. I could send a few bucks your for the trade.