I’m sure this thread has been covered before it seems very relevant again for the winter season.

Was just in Spider mid-morning. A large group of guys on reg mtbs were finishing up a ride as were a of group of trail runners. Btwn the two groups they put a solid thrashing on the trails that had been setting up nicely this week.
Many of the trails went from reasonably fast to nearly unrideable.

I mentioned to the trail runners that they should use snowshoes until it hardens up which elicited the “I know, right! It was up to our knees in places! Thanks for the trails!”

Some of the mtb’ers are on this site, some are very experienced riders. I suspect all know better.

This is applicable anywhere that we’re riding on prepared winter trails- the Railyard, Bird Sanctuary, Spider, etc…if it looks like you’re wrecking it for everyone else go find a more appropriate place to ride.

Just don’t be these guys. 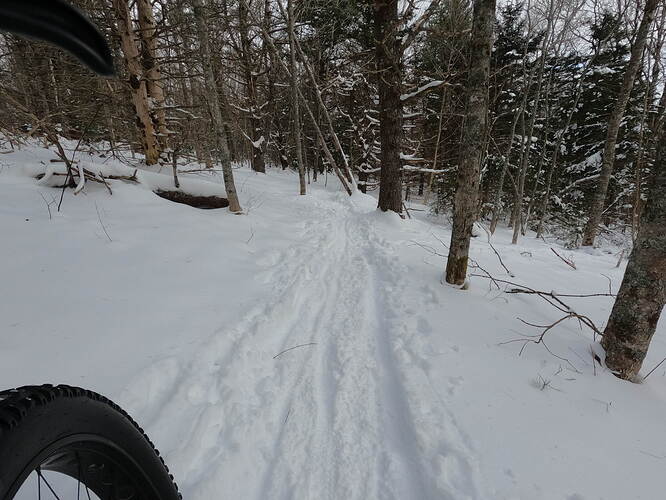 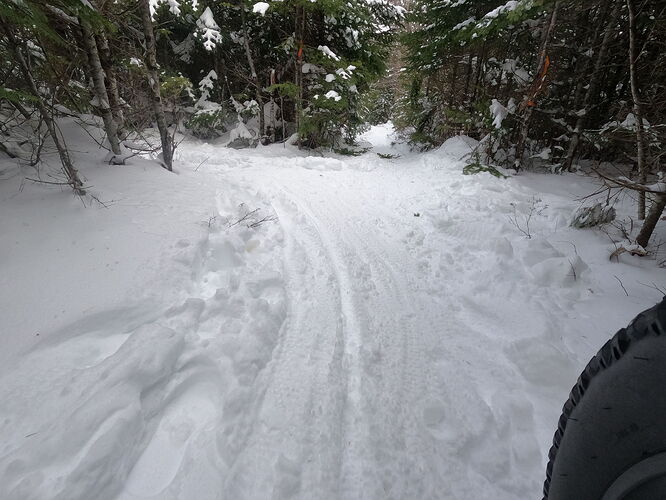 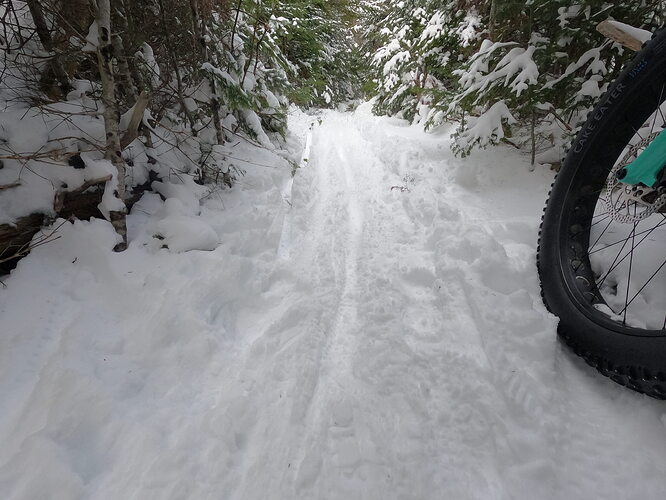 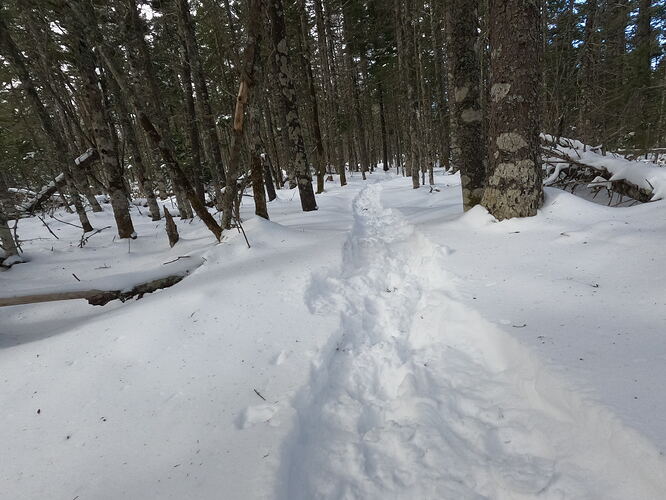 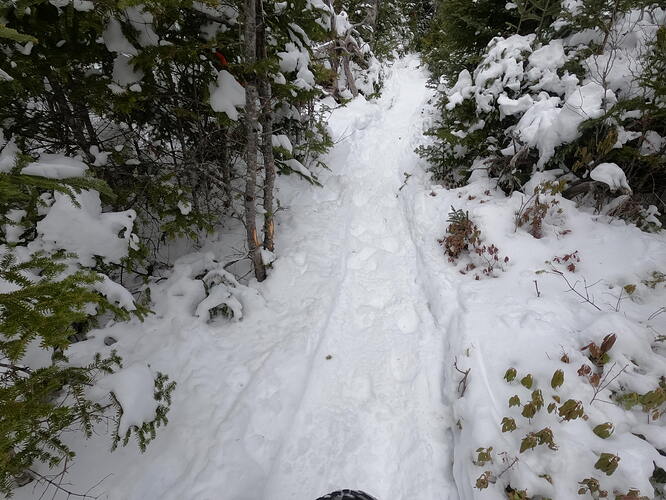 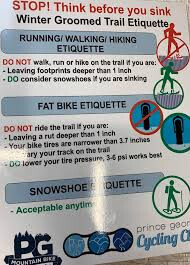 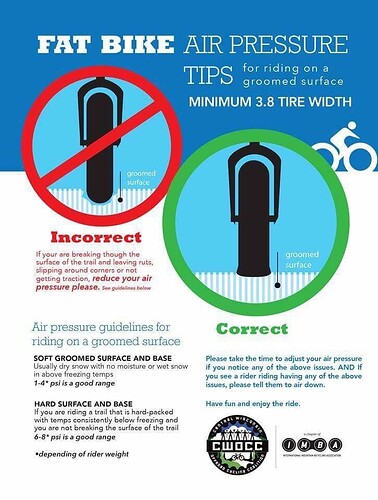 It sucks when people shit on your party and your best efforts to create some fun.

These are the lines that I always get served…
It isn’t your land, so you have no business telling anyone what to do or how to enjoy the woods.
If you want trails to be used in a certain way then go buy some land and don’t let others use it.

I was through spider lake this morning on my fatbike. Replicator was great just had a couple soft areas on the turns. Ribbon wasn’t bad wasn’t great.

Unknown trail was useless to ride it was full of footprints I had to walk 90% of it couldn’t get going at all . Definitely needs more snow shoers to pack it down

Hi Jeff, you must have been in just before the skinnies and runners.
I followed your tracks across Western Flow (unknown trail) and it was rideable but probably b/c your tires had smoothed out just enough of a line that I could keep it rolling. I might be running lower pressure too? I’m at about 3.5 lbs.
Anyways, hope you can get back in there, get the ruts and holes cleaned up a bit and get 'er flowing again. Cheers-TT

Hey street. We’re you riding a greenish rocky mountain? I saw you rolling in just as I was loading up. I would have been there earlier in the week for some rides too but took a fall at work and my arm took all the force of the fall so couldn’t ride for a few days… gonna try to get back over tomorrow or Monday… my normal ride partner doesn’t have a fatty though so riding solo

For unknown trail yah I pushed my bike most of it on the right side.

Correct, yes, that was me. Thanks for rolling your bike on the trail and walking off the trail, it was just enough to make it rideable!

I just wanted to update this thread.

I reached out to the trail runners from yesterday (one group of 7 runners and one single runner) since their runs were all viewable on Strava.

I diplomatically stated much of what I wrote in the OP and asked if in the future they could use their judgement to avoid running on the soft singletrack in fresh snow conditions and give it time to harden up.

Without exception they were courteous, polite and stated that they were unaware that the shoe chew would cramp other people’s good time. Most thanked me for bringing them up to speed on the issue, they had never heard of ‘think before you sink’.

Gotta admit, when I saw the first reply come up in my messages I braced myself and winced a bit before I opened it but was rewarded with reasonable, mature responses and “that doesn’t seem like a large ask”.

Ended up going back/forth with one guy who runs there often and I ended up e-mailing him a couple of GPX files for routes he’s never seen before.

Faith in humanity restored for this wknd!

It was not our intention to ruin the trails that you guys have been working on so hard. We respect all the efforts that you guys are putting into it. We were only out there last saturday coz we thought it was ok for regular mtb tires at the replicator and ribbon of love as what street mentioned in his previous post. Please accept our apologies and please let us know if there is something we can do to make up for it. Cheers!

Hi Adis, much thanks for reaching out and welcome.

There’s not a single mtb’er, myself included, who hasn’t ridden on a soft or muddy trail that in hindsight they should probably have avoided. We’ve all done that.

Hang tight, with all the snowshoing and the fattie riding that many have been doing before this next storm we should end up with a decent base that hopefully freezes up nicely after the thaw and rain and could be great for all bikes.

Stay tuned, and again, thank you and welcome.

yeah… i don’t know about all of this

i went out riding on my fatbike twice last weekend on local trails - trails i’ve helped build and maintain since i moved to the area. both times a mixed bag. where snowshoe-ers and fatbikers had been out on the trails exclusively they were reasonably firm and fun. where hikers and walkers had been, the trails were soft and thrashed, all but unrideable. at one point i found a trail in great shape and met a group of walkers at about the halfway point who were going the opposite direction – after which point it was basically unrideable

but. combined on the two rides i ran into far more walkers and hikers than bikers, snowshoe-ers and xc skiiers combined. yeah, the former group were ruining it for the latter group (at least the bikers). however, there were more of them; and if the point of the trails - especially public trails on public land, or private land where owners have given permission or looked the other way as trails were built - is to enable people to get out and have fun in the woods, i’m happy for the majority to be able to get out and use them, even if it means me and mine aren’t able to enjoy them as a result

to be clear, even if the walkers had been/were in the minority, i don’t think it’s cool to ask them not to use the trails so that bikers can enjoy them. again, public trails for the public good – just because you don’t have/can’t afford the gear shouldn’t mean you can’t play

i don’t think it’s cool to ask them not to use the trails so that bikers can enjoy them.

The caveat, of course, is that if the groups could work together, the result would be trails that everyone could enjoy. I’d wager that the walkers would even enjoy it more because they wouldn’t be sinking into the snow, working harder, and getting wet boots and socks.

If the trails are unsanctioned (Whopper and Spider, for example) then there’s not much to be done other than some polite conversation and maybe suggestion snowshoes for the reasons above. I think sanctioned trails (Railyard, McIntosh Run) could possibly impose some usage limits or guidelines, but who’s enforcing that?

Regardless, I’m hoping to enjoy my fat bike for another ride or two before I sell it.

Are we all reading the same post here, I don’t see anywhere where it was said only bikers should be using the trails. Sanctioned or not, trail etiquette should be applied and common sense utilized, if you’re determined to go trail running or riding while the trail conditions are less than ideal maybe consider a treadmill or stationary bike

. The trails are for all of us and we all need to be responsible, if you’re causing damage, just turn around and leave, bike or no bike.

What is being damaged? The snow?

I guess on a managed and groomed trail the surface can be damaged and therefore your effort and time wasted.