A lot of folks ride right through the winter, use this thread to keep everyone updated on trail conditions.

Is Shubie rideable? Has it been plowed?

I am looking forward to Wrandees as soon as it’s good to go… Love that place in the winter.

Another great place is Uniacke Estates…

Does Uniacke Estates get any dog walker traffic in the winter to beat it down?

Yes the closer trails (Drumlin Field Trail) and the one that goes to the fire station (Murphy Lake Trail) get lots of walkers. The longer loops (Post Road Trail, Red Spruce) get lots of snowshoe and ski as well.

It’s a lot like Wrandees in that some sections are just super rooty in the summer and the winter, white gold!

Will be interesting to see what Irishmans’ will be like.

Don’t forget Hemlock ravine, and the dingle tower. Both get lots of traffic and if ridden at night, not many pedestarians.

Traditionally it’s been unrideable, best for ski or snowshoe. It gets post holed to shit by a few people who walk there in the winter with their dogs. In the last couple of years West Hants held some snowshoe hikes there but it was not enough to pack the trails for riding. @Adam and I tried our best to pack it, I even made a groomer to drag but we couldn’t keep up with the snow.

It will be interesting to see how much more traffic goes there this year now that it more people know about it. The Archery Club holds a winter event in February, no one wears snowshoes ever and depending on conditions they use atv or snowmobile to get the targets set up, so it is generally a right proper mess on that loop afterwards.

Looks like @TrailFlow put a push on to open a new trail for the winter appropriately named “winter loop”:

Reclaimed woods road loop, some sections may be seasonably wet. Best for dry seasons and winter use.

63 Likes, 1 Comments - TrailFlow Outdoor Adventures (@trailflow_ns) on Instagram: “Snuck out this morning before the storm hit to finish cleaning up a bit of reclaimed trail on a old…”
1 Like
Pepperjester December 14, 2016, 11:39am #10

Yep, “Winter Loop” just a temp name as I needed something for Trailforks. Seemed like a reasonable placeholder for now, and one that I won’t stress to much if sticks.

Basically there was an old woods road that was to be reclaimed as part of our project, not much was to be done to it beyond brush clearing and a bit of mowing. There are a few reroutes (that will be benched as weather permits so their less off camber) that will keep uses away from the marshy areas so I think once that’s done it should stay dry more often then not.

It make a great snowshoe loop and would be an excellent ski too!

Did you leave the stump chair there? I used to call that section “have a seat”

Looking forward to hitting it on the XC skis

Line 24/IPA has been snowshoed twice, including last night as it warmed up, so it may be rideable once it freezes, it should compact even more with the rain, so hopefully it will be good.
Its packed from the overpass, all the way to the top of line 24.

Did some trail recon today.

On the plus side, at least got in some bike time on the asphalt and a good core workout trying to stay upright on the BLT!

Brent: Do you mean the one that is literally a seat on a stump?

^ ^ Still there. It’s not on the new loop - the skit trail is on the woods road at the bottom of that hill. That section will is on the radar for the future for sure. We should be able to keep the chair as long as it’s still stable. 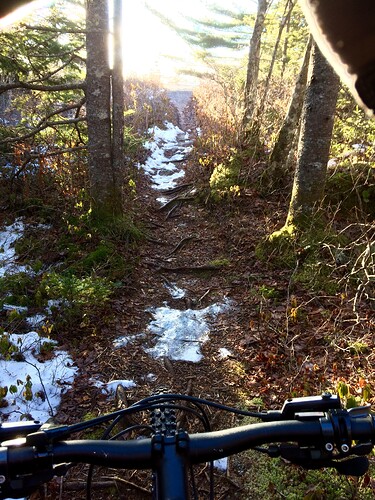 The dirt fire road in from the BLT is another story though…TOTAL SHIT. Barely rideable. But worth the trip in if you stick with it though.