Has anyone been to 9 Mile in the past few days? Just wondering what the trail conditions are like. I know it can get pretty mucky. Was thinking of going for a ride out there on either Saturday or Sunday. Not sure if it’s been sunny enough to dry it out.

My guess is it’s probably still got some wet and mucky spots and because there is so much shade I find it dries out a little slower than some other trails. Supposed to be pretty nice tomorrow so it may be in good shape by Sunday. The Cob is pretty close by and is a lot more vertical so it may drain better… not sure. @TheBuilder what’s the word on the Cob?

Yeah I’m thinking it might still be mucky in sections.

I haven’t tried out The Cob yet. Maybe I’ll give that a shot if it’s in decent shape.

I rode at Nine Mile River and The Cob today. First time for me on both so I’m not sure what conditions are normally like. Nine Mile River was a lot muddier. I’ve certainly ridden worse, but I’d give it a while if you aren’t a fan of mud. I was at The Cob first and was mostly clean after that ride.

Thanks! Yeah I feel bad when it’s mucky to the point that you can’t avoid making the water holes worse than they are. When it’s bone dry 9 mile is a blast.

Hey Aimish… unfortunately thebuilder is taking time away from trail building and riding to concentrate on other priorities. The last time I was in it was clear and good to ride.

Any idea what conditions are like at 9 mile? Was hoping it could be rideable by Sat/Sun? Maybe that’s wishful thinking though.

Trailflow has been doing some work on Nine Mile. The front loop is getting redone. Most boardwalks are being replaced by rock and crusher dust. A few boardwalks are being retained to allow water flow or for sensitive vegetation, but will be rebuilt. No more bouncy bridges sinking into water on the front loop, and the boardwalks will be wider. The part of the loop going left (Pitcher Plant Loop) as you enter the trail is almost finished. Boardwalk P2 is still in its original condition - it will be rebuilt eventually, but it is usable. Trailflow is currently working on the section that goes straight ahead into the trail, and that section is closed. That work should be finished in a few weeks. The trail is still rideable by taking the left branch (Pitcher Plant Loop) as you enter the trail.

Volunteers have improved “Mini-mud Alley”, the muddy section immediately after the crusher dust ends. We’re not quite done with Mini-mud Alley, but it is significantly improved.

We’ve had a couple of work nights moving crusher dust from a stored pile into the trail. Having material closer to our work sites will speed our trail improvements. Looking forward to using it to make a drier trail.

Trailflow reports that they’ve finished their work on the front loop at Nine Mile. It will be more mellow for mountain bikers, but no more saggy, bouncy, sketchy boardwalks, and fewer/no muddy puddles. Get out and check it out!

…almost no saggy, bouncy, sketchy boardwalks. We still have to rebuild boardwalk P2, which we didn’t budget for in Trailflow’s work. We will need to do some fund raising and perhaps volunteer recruitment for that rebuild. It currently has two bouncy sections, so be careful riding it. Hoping to secure it to take the bounce out this weekend.

Trailflow will be doing Hemlock Loop repairs. That means we need to get wood down to that trail. We’re hoping to have volunteers with ATV’s deliver it as close as possible, and then have a work party to carry it to where it’s needed. I’d like to get some mountain bikers to strap boards to their bikes, wheel them down to the beaver dam boardwalk and then ride back for another load. We’ll need to move 100 boards for patching and more for two boardwalk rebuilds!

Finally, there are broken boards on boardwalks C11 and C23. Both broken boards can be ridden around, but be careful. Hoping to patch those sometime this week.

First loop is SWEET. It flows much better (no awkward bridge approaches) and sight lines are very good. Nice work Ryan and Michelle!

Excited to get Hemlock sorted. Will gladly haul lumber if the bridges are being built to Trailflow standards!

Glad to hear you enjoyed front loop! A word of warning to everyone- you can carry more speed, so watch your sightlines so you don’t run anyone down.

Unfortunately, only a couple of boardwalks in Hemlock are getting rebuilt - the beaver dam/bog boardwalk and the v-shaped broken bridge near the end. The rest will be patched. Rebuilding the rest will be a long term project. The main goal is to get the loop up and running again.

Broken boards on Boardwalks C11 and C23 have been replaced.

@coaster and another volunteer are going to work on P2 tomorrow night to make it less bouncy.

Boardwalk P2 has been secured to take the bounce out (thanks @coaster). Eventually planning to replace P2, but have to raise funds, so may be a little while.

Boardwalk C8 has also secured to take the bounce out.

Widened boardwalks C21 (water crossing in the valley between two hills) and C19 (boardwalk before the new (last December) one with the handrails) with an extra board (6") to make crossing a little more comfortable.

Trailflow is currently working on boardwalks in Hemlock Loop (Slog Loop). Hoping to have Hemlock Loop back in operation soon.

Much appreciated Eric and crew!

We’ve finished our work in “Mini-Mud Alley”. Moving on to the next muddy section - the hill above boardwalk C21 leading to “Bog Corner”.

Trailflow has finished their work on Hemlock Loop for now. They’ve done great work. The Beaver Dam boardwalk water crossing has been completely rebuilt, as well as the last boardwalk that had fallen into a v-shape, and several other boardwalks. There are still 3 broken boardwalks to be redone - H6, H7, and H8. We’re basically out of money and wood. Need to do more fundraising to complete that work. 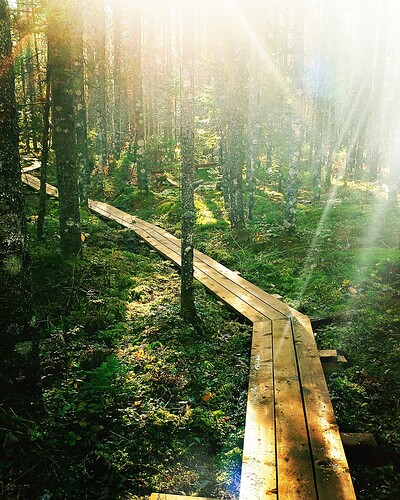