I know a guy who was there tonight as well who said he saw one. Never said it gave him any problems but did scare him.

Makes me feel a bit uneasy because i have ridden there alone the few times ive been there.

I was there last night. Talked to the kid, not saying he didn’t see a coyote but he looked like he’d be scared of his shadow.

Cops showed up but nothing really to be done after dark.

I hear them singing out there often, and there is plenty of scat in a few areas (they have their habits). Rarely see them. I’m often out there alone, as is Kaarin, and don’t worry about it. I do worry about my dog occasionally, and keep him near when I hear coyotes.

That doesn’t surprise me. They are more prevalent than you think. I haven’t seen him in a while but there was an old coyote that used to hang out in Shubie Park

He may very well join the forum
He seemed pretty stoked after his first ride.

It was pretty cool to see a bunch of young fells trying out mountain biking and having a blast.

They were talking about hunting for MTB deals on kijiji so they could get on something a step up from department store bikes. So… coyotes aside… I’d say they’re hooked.

We gave them some ecmtb stickers.

I’ve seen coyotes at MRWA out there a few times. Our dogs wear bells all year long when we’re on trails - I’d highly recommend that if you’re taking the dogs out with you. I do it a bit for myself, we sound like a lot. And it’s my “heads up” you’re sharing the trail to others so we don’t take them too off guard. But it also helps keep a number of wildlife lying low (and less likely to be the thing that any of the three idiots will chase after if they lie low).

Do any of you carry anything for bears? There seem to be an abundance this year. And one that has an aggressive record on the trails near my family’s farm outside Truro (in the Lr Harmony/Camden area). I’ve been a bit nervous to run/ride alone there now, but IDK if I’m being silly.

I had the chance to do several group rides in Powell river BC, all the dudes out there seemed to have a bear spray canister in the water bottle cage and some had a big ass hunting knife strapped to the top tube. Made me a little nervous when I lagged behind!
Around here my dog wears a bell and an orange vest or bandana-so she doesn’t get confused with a wild animal. I have a bike bell that I ring periodically

If possible put your bike between you and the coyote too. I’ve done this to a few off-leash dogs in Wrandees that have taken a run at me. Not only does it act as a shield, but it would also make you look larger. You could also use it as a weapon if needed.

I did join haha that’s me awesome ride

Def hooked me new hobby is just started alot more to come in the future . Thinking of doing volunteer to fix tracks as well

It’s there to help the trail crew.

Reality is most MTB trails are in the woods, and that is where wild animals live. As we encroach into their areas, contact with them is going to happen.

I grew up with the West Pine area in my backyard,using it long before MRWA existed, and have either seen, or seen evidence of, lots of wild animals, including coyotes. Not much can be done about it, other than users taking the necessary precautions if they feel the need to.

I ride solo in there all the time and have never once worried or given a second thought to running into a coyote, or some other wild animal, but that’s just me. If I was riding in an area with wild animals I considered far more dangerous, I would do things differently.

Like @Rolls said, follow the BAM technique if you encounter one, or add features to your bike or equipment to make noise that should alert them to your presence, because unfortunately, we are riding in their backyard and they aren’t going anywhere.

Noticed some emergency whistles at the Alabaster trail head yesterday. Not sure if MRWA placed them for trail users to borrow and use if needed, or if they were just left there because they were lost and found on the trail. @Lawrence ? 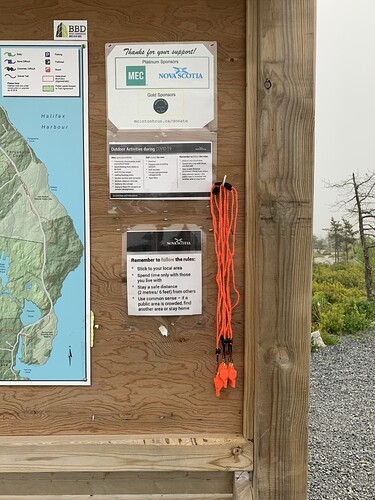 Ran into a big momma bear and her cub on a gravel ride today. That was pretty scary. Not in hrm mind. Definitely more concerned about bears than coyotes.