Inspired by GMBN’s Dirt Shed Show. Let see (or read about) your best bicycle related hacks and bodges! Post up your customized, home made or repurposed bike parts, emergency fixes and repairs. 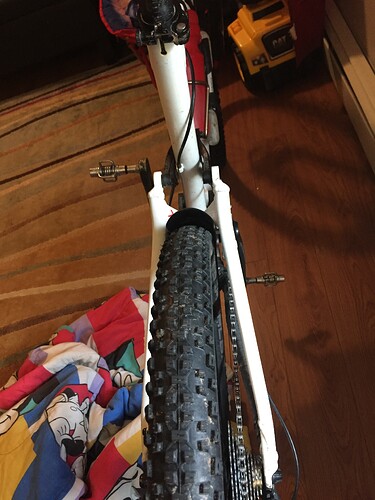 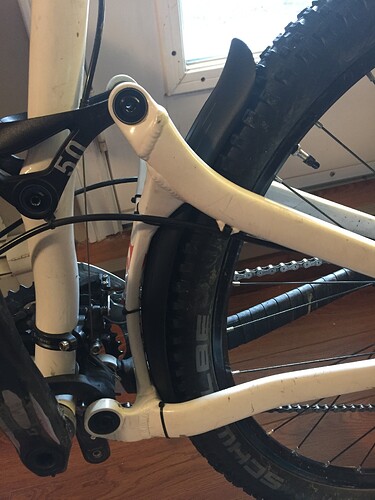 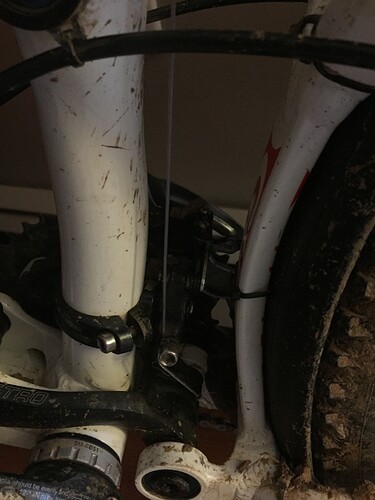 Custom frame bash guard for my old BigHit. Made it around 2004. Why? Because I like to smash stuff! Edit: Forgot to mention. Thats an custom hybrid air/coil JrT in the photo too. 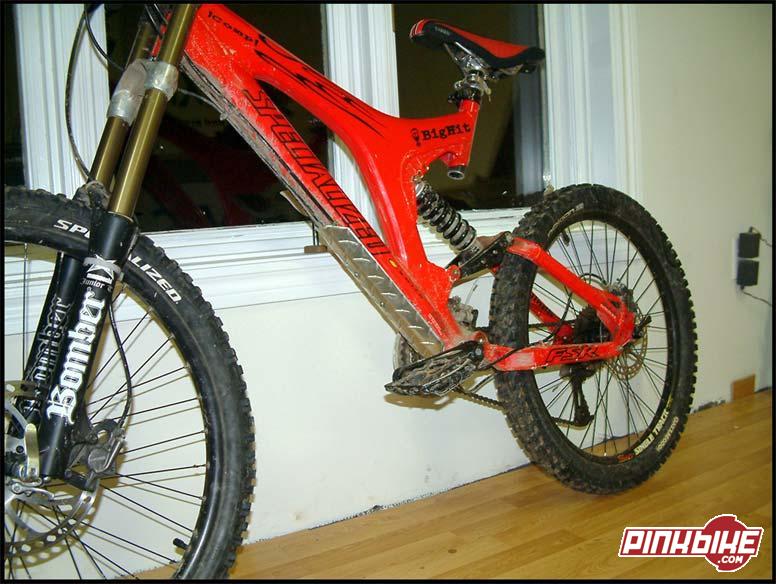 Custom painted (graphics are painted too, not decals) left hand drive off road fixed gear bike. Why? well why not? Cog was mounted to the disc rotor bolt holes. It was umm… interesting (AKA scary) to ride in the woods. It did climb like a goat thou! 2008 or so. 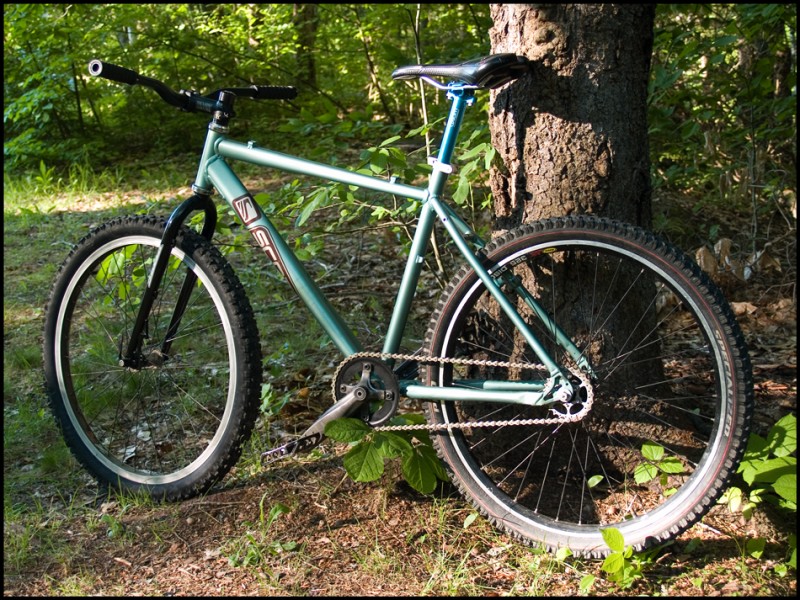 My Old Astrix with hand made drop outs that were about 1" - 1.5" longer then stock. Why? Stability! The bike ripped DH in the shown set up. A bit of a backwards approach with a long rear, short front, when compared to todays short rears and long fronts. But damn did it work good! This was done in 2007. 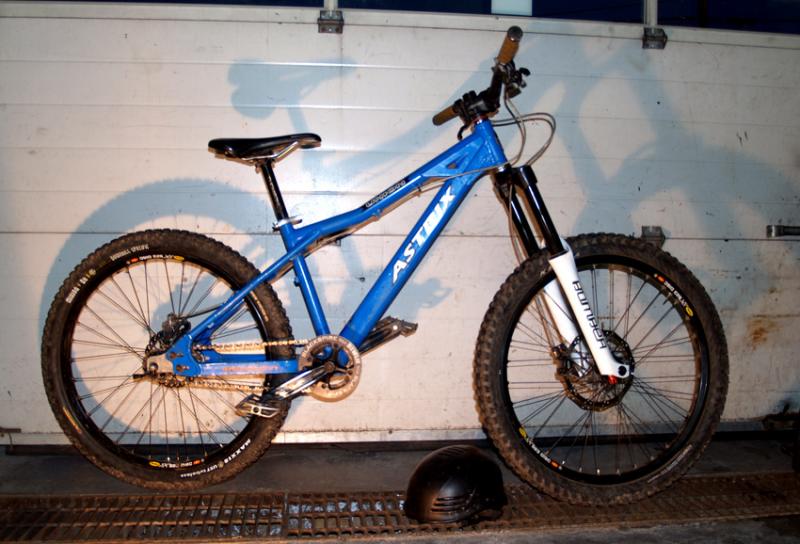 Earlier build on the fixed gear bike as a regular single speed. Didn’t have (or know about perhaps) half-links at the time so rigged up a phantom gear set up and tensioned the chain using a floating cog. Looks strange but worked great. Only dropped gears once or twice when a sick got sucked up. 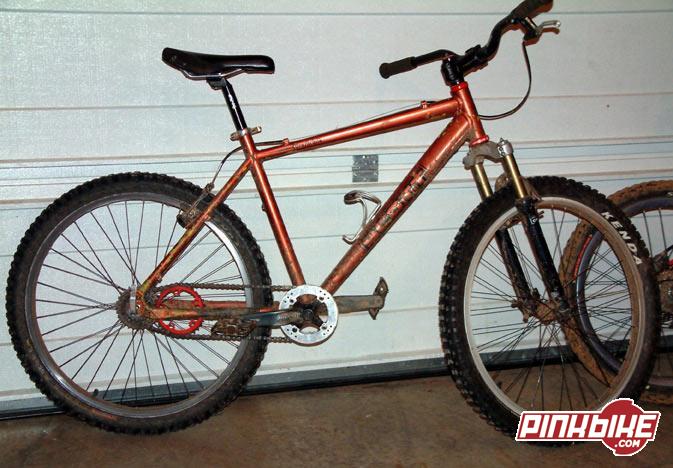 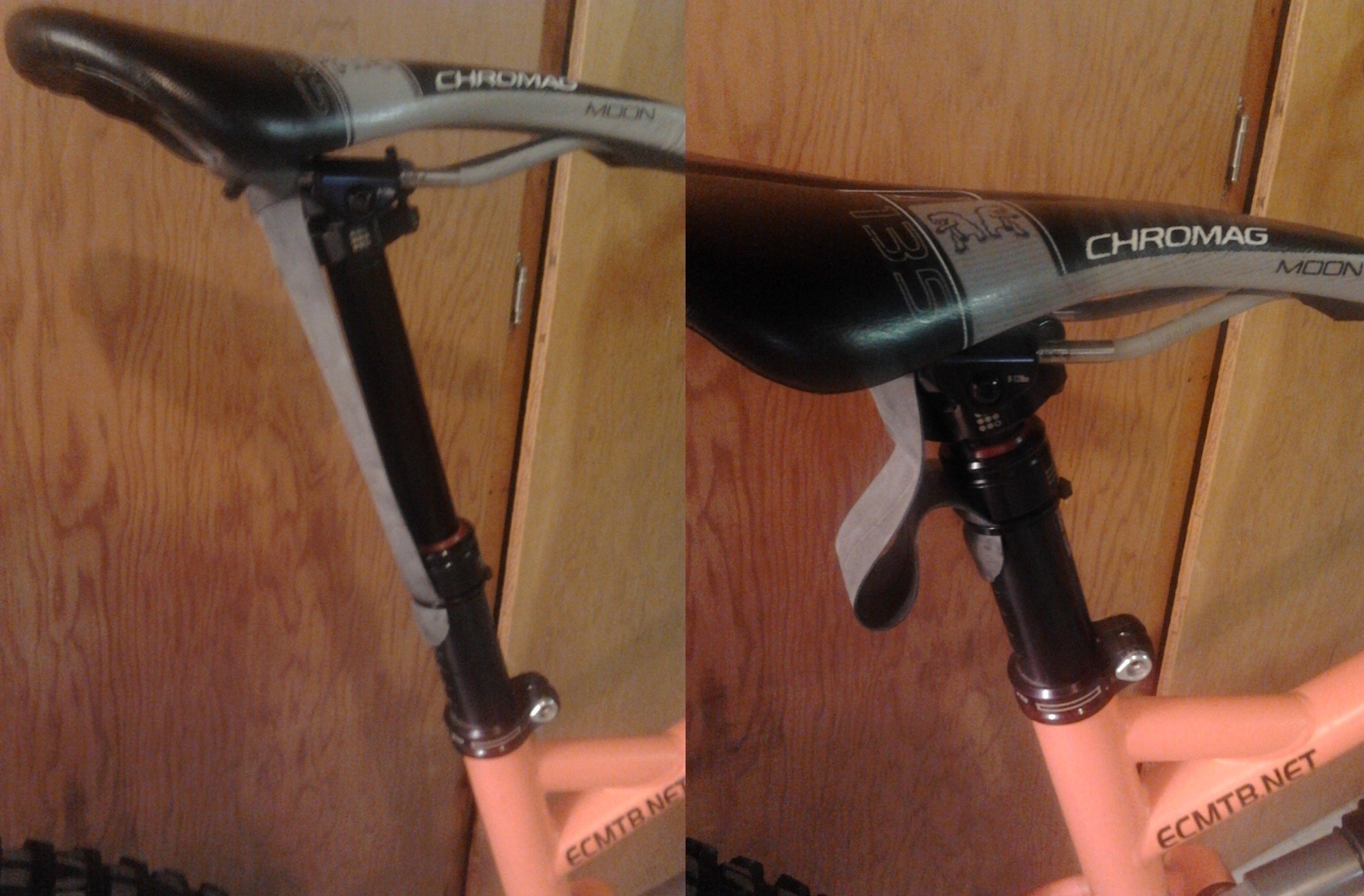 I wince fixed a guys tube with electrical tape and then used moss to fill the tire where it was taped off. I don’t think it worked too well but it was worth a shot.

Nice. Could also be used to slow the rebound on the saddle a bit haha! 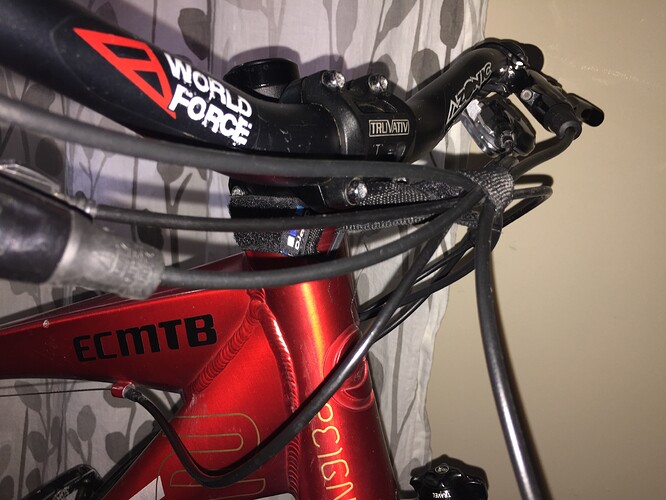 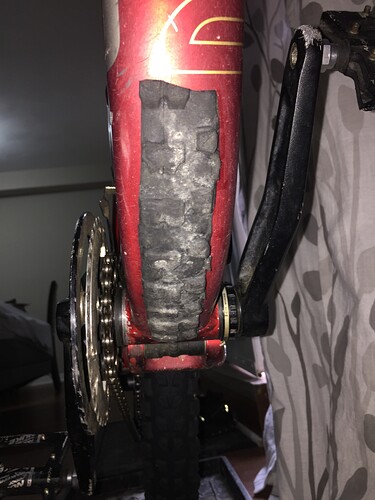 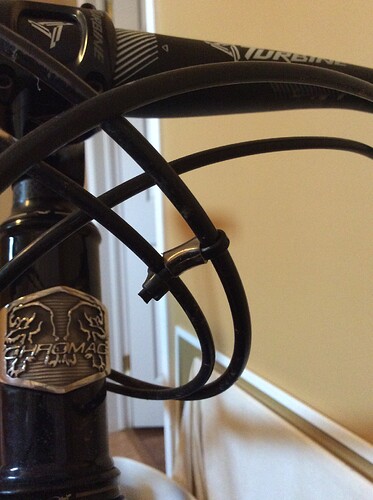 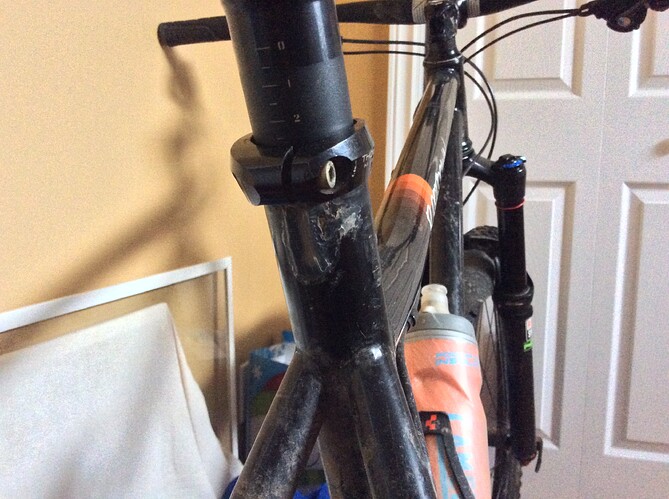 RTV sealant over notch in seat tube. Trimmed with a razor blade after it cured. Keeps water spray from rear wheel out of frame. (Can’t see in pic, but I also have a thin O-ring under the Thomson clamp to act as a seal too.)

How about a Rock Fox? Rock Shox Pike uppers and internals on Fox Float lowers. Was more of a joke then anything but it did work just fine. Still have it as a back up fork. 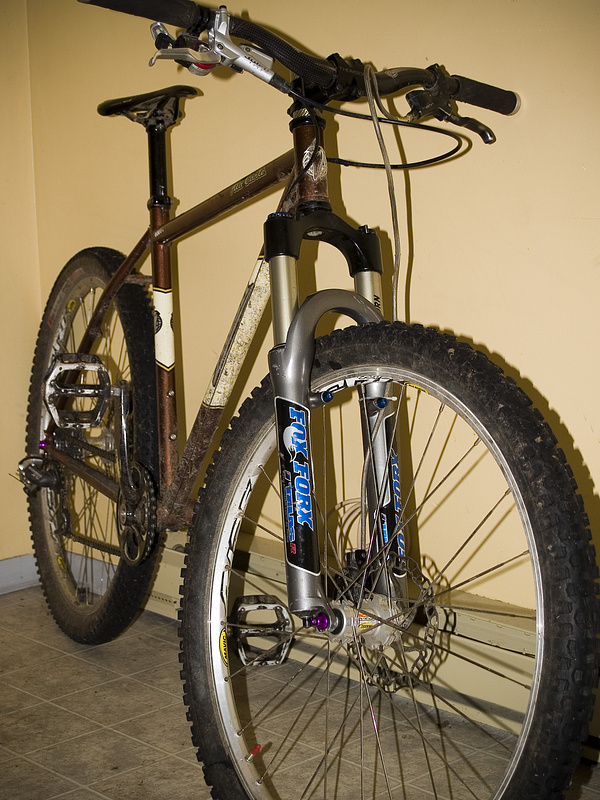 Amazed you could do that.

The bolt that one of my hydraulic brake levers pivots on came off. Rather than ride home brakeless, I found a suitably-sized stick and rammed it in the hole. Worked perfectly. I think I forgot about it, and did another whole ride with that stick in place.

One time I got home and there wasn’t any beer in the fridge so I had to make a rummer instead. Added bonus: I saved a few calories by using diet coke.

Us riders can be a resourceful bunch

Problem: The jump bike has a short seat tube and can’t get proper extension for riding to the park.

Solution: Customized dropper post. Removed the remote, converted to under seat level operation. The Specialized Command post’s only come in a remote set up so had to make my own lever. The lever used is a modified blade from a old Hayes 9 chopped and filed to fit. Seeing as I only need to drop or raise at the start and finish of runs the under seat set up is perfect. I might paint the lever black to match later. 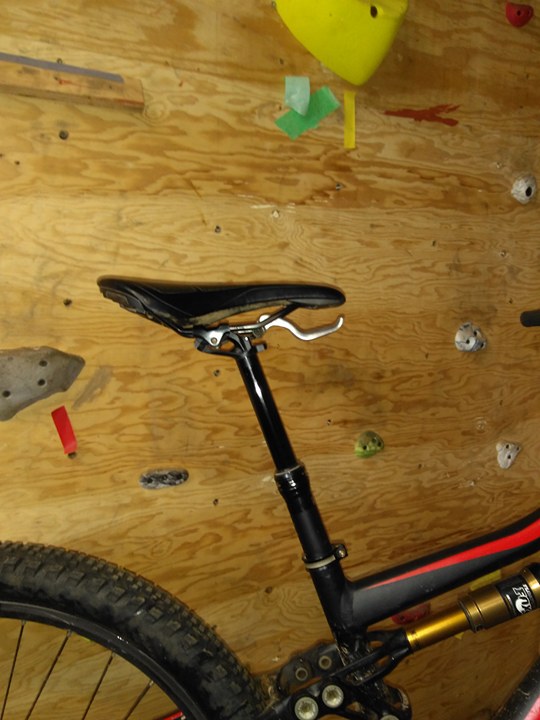 That is a hack for sure. Pull up or down to drop?

Push down. It doesn’t take much force to do and is pretty easy to do when on the bike.