Mid Plus bikes for Snow

Anyone running 27.5 plus for winter instead of a Fat? Just wondering how a 3" does?

Disclaimer, I’ll only be riding groomed or previously packed down by a fat bike trails. I figure any fresh deep snow I’d stay home regardless if I had a fatbike or not (no real trails nearby, Truro is the closest best option I have, it’s just by luck on my part that it is groomed)

If/when it gets icey I’ll be switching to studded tires.

People have actually been riding bikes on trails during the winter for years before fatbikes were invented. I had to laugh at the comment in a FB group about how the trails were so good that “skinny Bikes” were staying up.

I rode spider lake yesterday on my fb… my brother was on his enduro with 27.5x 2.5s, and he had zero issues until it got latet and things started icing up in spots

Like @tossedsalad says, I’ve run 26x2.1 studded for years. I’ve had my 27+ nonstudded bike out for the last couple of winters when it hasn’t been icy. I think it does better than the 26’er, but I’ve been out with fatbikes in conditions where I bogged down, but the fatbikes were still able to go. Still really need packed snow if it’s any deeper than an inch or two.

As noted above, you’ll be fine with well packed snow. A 3" wide tire won’t be much better than 2.25" wide when the snow is loose. That’s where a fat bike shines.

27.5 x 2.8 here, as others have mentioned packed snow is fine. Deep snow, may as well be full on skinnies (confirmed yesterday on the fire road to Flipside).

The flotation effect seems to only really kick in on the fat bike sizes. Still lots of fun though!

To the OP’er, great question! Plus bikes work better than reg mtb’s but not as well as fatbikes if it’s soft, fresh, drier snow but if a Plus bike is whatcha got go find some semi packed or packed trails and get your ride on!

@ wider conversation, the older I get the more I realize there’s no black/white/absolutes in life. There’s no distinct line btwn where one bike works and others don’t.
My philosophy with fatbikes is the same as my philosophy with all bikes: I always want to ride the fastest and funnest bike for the conditions.
Sure, I can compete in a road race with a cross bike, go on a long gravel ride with an enduro bike, race enduro with a hardtail, ride the pumptrack w a hybrid commuter, etc but they’re not the most efficient, nor fastest tool for the task. And there’s nothing wrong with that. The best bike is the one you’re currently riding- or having the most fun on. But understand that some bikes are more efficient and faster in some conditions than others. Bike industry cynicism aside, for heaven’s sake, that’s usually WHY those types of bikes exist.
Like you I’ve seen lots of posts from guys in recent yrs proclaiming “I don’t need no stinking fatbike!” and that’s fine if you’re ok with not riding when it’s deep snow, fresh snow or loose snow, you’re down with riding boot pack in the local park, urban trails or waiting til it’s packed down by fatty’s or atvs. I’m not into riding a trainer indoors, I’m not into NOT riding cuz it’s snowing. I want to be able to ride 365 when my schedule or mood allows and I can by having a fatbike. I relish going out in the snowstorm and cutting the 15 cms of fresh. And doing it again, and again. It’s not my opinion, it’s simply physics- I can ride my fatbike in conditions that would require me to walk or push on a reg mtb. Sure it’ll be great for everyone in 3 days when it’s been packed by 30 sets of tires but I don’t want to wait, nor follow, I want to lead and I want to ride NOW. I ride way more in the winter months since I got a fatbike and spend less time prognosticating about the depth of snow and “where will the walkers have already packed it down” than I did for 20+ yrs so it works for me.
99% of the fatbikers also own reg mtbs. When it gets packed hard and riders can rip reg mtb tires you can be certain I’ll be the first guy on my reg mtb. Hell, if it ever gets so smooth and hard that I could rip a cross bike faster than my mtb I’d be the guy doing that too. Fast is fun.
Ultimately, people riding bikes is the goal. The more, the better.

The best bike is the one you’re currently riding- or having the most fun on.

Thanks everyone for the comments. I should have added a bit of background. I have ridden snow a decent bait back in the day on conventional width tires(ie 2.1-2.2) but never anything wider. I picked up a 27.5+ Hardtail this year to try and love it. However I decided to get a different bike and was debating selling the 27.5+ or keeping it for winter . I didn’t want to spend cash on tires if it was t really going to make much different over getting some for my xc bike

TT nailed it, plus tires are mostly better than a standard 2.3 MTB, but not by a lot.

I ride a set of 27.5x 2.8 studded tires and I’ll ride in 98% of conditions, even if it sucks, but for true fresh snow, you need a fat bike. Also, days like yesterday when it warms up a bit and the trail gets soft and crappy for a normal MTB, fatbike don’t care…

I had a fatbike for a season, but unfortunety the extra Q width flat out kills my knees for some reason. I rented one this past weekend, just to test, same deal, big knee issues.
I’d 100% own one if I could ride without knee problems, so I’m stuck with a plus setup.

Run what ya brung.

Edit, but by all means, if you can afford another n+1 go for it because you can’t take it with you.

Don’t put those Panaracer Spikes back in the box, put 'em on Ebay, the collectors will pay you enough that you can buy that fatbike w the proceeds.

No joke, I actually had the thought “fuck I could probably hit this on my gravel bike”.

I mashed through it all last year on a hardtail with 27.5 x 2.8 minion dhf on both front and rear. No studs either so line choice was key but i rode at the gorge all winter

MAMIL market has deep pockets. I saw a Kooka rasta anodized grouppo sell for 10kish on ebay a few years ago.

Lest I be known as the perennial retro grouch, I did actually go on the Cyclesmith website the other day to see what they had for fatbikes. So there’s that. 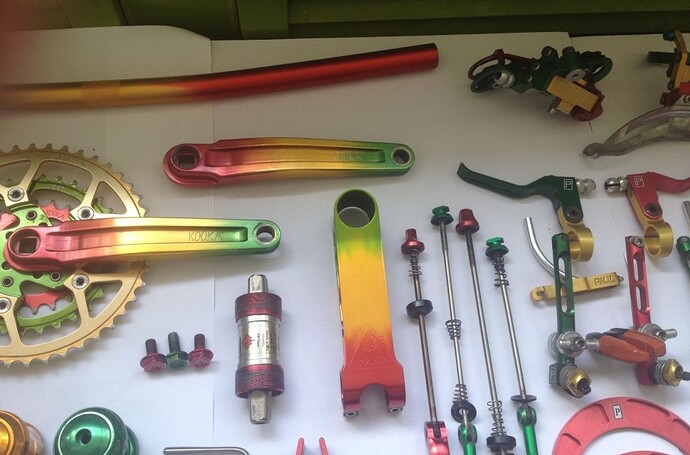 Hmm, I might actually have enough odds and ends to get that fatbike afterall.

I’d 100% own one if I could ride without knee problems, so I’m stuck with a plus setup.

they’re neither affordable (carbon only) nor currently available, but if you’re really keen to own a fatbike you might check out the otso voytek, which is built around an 83mm press fit bb and allows for the narrowest q-factor of any fatbike i’ve found: Voytek Frankset – Otso Cycles