I realize we are coming into one of the best riding seasons so far… but how was was your year so far?

The whole scene in Atlantic Canada is pretty awesome as far as we are concerned and we want to do a little collection of stories to celebrate this.

So let’s hear your most impactful stories of the year so far:

There are so many ways this sport is awesome. What is your story?

We are hoping a select few of these stories can be used in a blog post. (And of course also just for fun.)

Ok, maybe I need to prime the pump…

I had a number of great MTB experiences this year (and one bad one).

The ice biking in January and February, was fun. It is pretty cool to get in on lakes and explore areas we do not normally venture.

I took my nephew, daughter and some friends to Keppoch for a day of shuttling. They loved it… we all did to be honest. Got to try Switch Craft for the first time. Crazy stuff, crazy fun.

The ECMTB ride at Victoria Park for a meetup we did on the cusp of the summer solstice was a blast.

Meeting with the Mountain Bike Atlantic people at Keppoch and doing a ride with them was super fun.

The MRWA Buy a Builder a Beer and Mountain Bike Halifax movie nights were good times too.

However, I think the best for me was the time during our vacation in PEI when I was able to introduce four of my childhood friends to Brookvale. The stoke was evident in their faces. It blew them away and they will be back for sure.

This year in MTB has been nothing short of amazing for me and has brought my family back together, no exaggeration on that either.

Ended up utilizing the BLT system to reconcile with my wife (longs story, maybe over a beer sometime), progressed so much more than I ever would have thought and my confidence has shot through the roof. Been loving being able to have the confidence to clear more obstacles on more challenging trails, and loving the investment in the local infrastructure (think Brunello and Vic Park).

To date my longest ride ever completing 60k with my wife and realizing whats important in life.

Oh and passing 100 subs on YouTube, that was pretty cool too. (youtube.com/cycledad shameless plug)

Love the idea behind this thread

Many, many great MTB experiences this season…here are a few…

Annual trip to Fitz with the Rumble in da Jungle group…

Being able to experience what Atlantic Canada has to offer outside of NS, riding at Brookvale, MVP, Woolastook, White Rock, and French Fort Cove…

There’s lots more…but those are some of the highlights…

Let’s not forget your new bike …

Still want to rip Fitz on it though.

I believe your accomplishment this summer with the crazy rock slab is worthy of some stoke.

I even crashed it hard so it is definitely mine now…

And I am loving it…

Got a new bike and fell in love with the sport. Hockey was always my passion and i put mtbing side by side with it now
Experienced fight trail, vic park and my favorite empire all for the first time this year. Having a blast!
Oh yeh one pretty nasty over the bars crash first time doing flatlake loop.
Also a good tailbone smash and broken odi grip on a loop out practicing manuals haha

Mine was terrible… My last ride was on a frozen lake for gawds sake.

I’m going to have a word with myself & get better at this passion I had.

I’ve only been into MTB for a few seasons now, I rode a bike throughout childhood - high school but was never that serious about it, I had a super cycle mostly used for getting to friends places and a bmx I didn’t know how to use very well.
I took an unintentional hiatus from age 19-26. Moved around out of province, fell in love, got married etc… then a few summers ago I spontaneously bought an old freeride hardtail, and found an amazing trail system full of jumps berms and drops which sent me into a full frenzied addiction.

As for this year… Didn’t get much riding in compared to previous seasons, I was still recovering from last years bail when I did a full send off a fairly sizeable step down, was way too fast and overshot the landing transition and nosedived the flat ground after the transition (oops) - immediately ate the dirt and rock, and I won a sweet concussion and broke a couple bones in my face including a cracked orbital bone as a reward.

I was back on my bike within a couple weeks for light riding, dropped into a half pipe and my newly flawed depth perception caused me to overshoot and my rear tire ate my leg, bruised thigh from the knee up… I had several stupid crashes the rest of that season as well… I never fully shook that big crash until later this summer when I started feeling comfortable and balanced again.

So, One year and a severe concussion and broken orbital and cheek bone later (I was even wearing a fox full face), I’m feeling confidently back to my full capabilities and just fuckin sendin’r off whatever I can find again. Also just bought a new bike, and now that I’m full recovered… my season is just kind of getting started 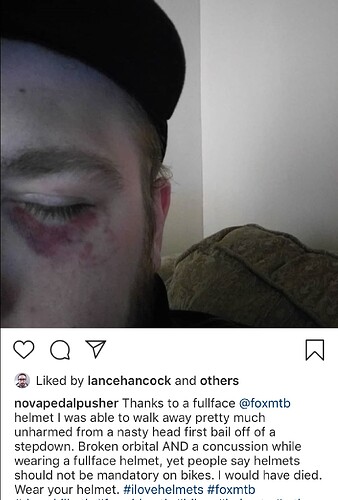 @m0rk do you want to ride today? I plan a 5pm-ish ride somewhere

Thanks @muddy! I ended up at work until six (may also be a cause!)

I’m out Sunday somewhere, so I’ll bed the new bike in then!

I had two summers, got a new bike for each!!

I’ve met a bunch of new people and rode trails totally different to what I’ve ridden before.

The ECMTB group rides have been very inclusive and a lot of fun.

Anyone one have a highlight moment this summer in New Brunswick and / or Newfoundland? 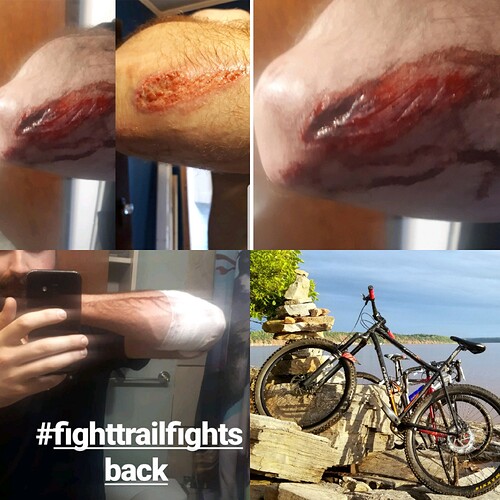 As many of you know and witnessed I started my riding season with a really hard down the first ride. It left me with little use of my arm for 6 weeks as it couldnt be stitched closed. I ended up leaving my job because of this and lucked out getting a job in my field of science after I gained use again. Still to this day that elbow is not fully healed.

But I was not done. I’ve now finished my 2nd year as a mountainbiker. Riding 2x as many km already this year as I did last.

I rode my first double black diamond! I pushed my skills as far as I could in a summer. I lost 26 pounds and my fitness came a long way.

2 weeks ago I completed a 100km ride with @rmacgregor9 and @Mattcasey303 Kev and Malcom and it was epic!

Another epic weekend was a PEI trip with the one and only @BBQBruce!

After torn skin, probably 750 dollars in destroyed parts (thanks Norco) and lots of sends this summer was awesome!

Also pumped that I’m able to use my voice to help shape the future of MTB in Truro!

Came along way from a hungover guy on a bike being scared of the Resivoir Trail just 2 years ago!